Most of my excitement thus far for It has come from the hype surrounding it. I never read the book, and I don't know much about the story, so the majority of my anticipation came from how excited everyone else was. The first trailer was good. It certainly did catch my attention. With horror movies, you have to be careful. Most of the horror films that come out nowadays are complete sh*t, but every once in a while one will slip through the cracks that is excellent. What I noticed from the first trailer was how well made it was. The direction by Andrés Muschietti stood out, along with the cinematography. So I knew we would be getting a film that was at least competently made. But I wasn't sold yet on the story or the scares. Yes, Stephen King's book is renowned as being absolutely terrifying, and there's some f*cked up sh*t in there (I looked it up, trust me), but that's not a guarantee that it will translate well into film. Just because it looked like the people behind the camera knew what they were doing didn't mean we would get a great, terrifying film, and that's what I was looking for. However, a new trailer has dropped, which can hopefully shed light on some of the remaining questions I still have surrounding this movie.

This is a very good trailer, but I am still not 100% sold. Bill Skarsgård does look great as Pennywise, however. When we first saw pictures of him in costume, I thought he looked a little ridiculous. He didn't look scary at all. However, seeing him in these trailers has convinced me that Skarsgård will deliver. Where my apprehension for this movie comes from is that all the scares in the trailer are jump scares. You have Pennywise hiding behind a wall. Pennywise hiding in the corner. Pennywise hiding in the sewer. All he's doing is hiding and popping out of the shadows. I hope that they're saving some of the more genuine scares for the film, because if all it is is just jump scares with Pennywise hiding in the shadows, then this movie will immediately lose me. I know the book is more than that, but I hope that the film doesn't fall for those classic horror movie tropes. I would like to see a redband trailer before this movie comes out. I think we need one. We're getting a lot of PG scares, but nothing that is truly scary. Nothing that is going to haunt me, and convince me that I need to absolutely see this movie. If we can get a redband trailer, one that does just that, then I think this movie could secure a great opening weekend, and convince a few fans who are still on the fence like I am. Overall, I'm going to go see It. I'm curious about it. But I wish I was more excited going into it, instead of being as apprehensive and cautious as I currently am. 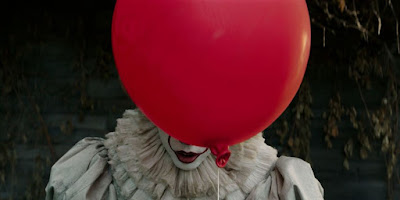 What do you think? Did you like the second trailer for It? Are you looking forward to seeing the film? Leave your thoughts in the comments section below.