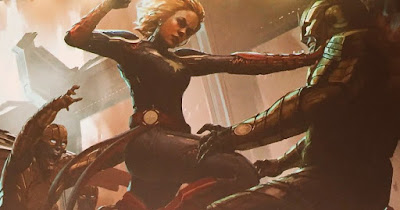 I've been interested in the prospect of a Captain Marvel film for a while now, mainly because of the casting of Brie Larson. She is such a tremendous actress, and I've been on board with her ever since she blew me away with her performance in Room. It was shortly after she won her Oscar for that film that Larson was confirmed to be playing Captain Marvel. Other than Larson's casting, I wasn't entirely invested in this film. I know very little about Captain Marvel from the comics, so my enthusiasm mainly came from Brie Larson's attachment. Regardless, I've been interested to learn more information about the project. I'm always intrigued by a new Marvel movie, and I will always give the studio the benefit of the doubt. But I was still looking for some story elements or some details that would actually get me excited for this film. We still have a couple years until it hits theaters; it doesn't come out until March of 2019. But we've known it will be crucial in bridging the gap between Avengers: Infinity War and Avengers 4, and that Captain Marvel herself would come to be an essential and pivotal character in this universe. So it seemed like San Diego Comic Con this year would be an opportune time to really sell people on Captain Marvel, and show us why we should be excited. And Marvel did just that!

Marvel announced that Captain Marvel will be set in the 1990's, featuring a Nick Fury (Samuel L. Jackson) with both of his eyes. We will also be getting the Skrulls, a shape-shifting race of aliens who have been part of the Marvel comics for decades. What's interesting is that Fox own the rights to the Skrulls, as they are mainly part of the Fantastic Four mythology. That's why The Avengers featured the alien race the Chitauri, as they didn't have legal access to the Skrulls. But that seems to have changed, as the Skrulls will be the villains of Captain Marvel. This opens up some fascinating and exciting prospects. First of all, I love that Captain Marvel is an origin story, but that it's set back twenty years. It distances itself from the rest of the MCU so that it can be its own story, and it will make the character a lot richer when she fights alongside the Avengers in Infinity War or Avengers 4. She won't be some newbie still figuring out her powers; at that point, she'll probably be the most experienced of all of them. So I love that element. Where things really take a turn is with the Skrulls. Marvel must have big plans for them, or else they wouldn't have worked a deal out with Fox to get them. I think this means that we'll be seeing Secret Invasion play out at some point on screen. In the comics, the Skrulls (who are shape-shifters) replace key people in the government, including members of the Avengers, as part of their infiltration mission on Earth. It was revealed they had been doing this for years. So I think Captain Marvel will serve to set the groundwork, revealing Avengers 4 possibly to be "Secret Invasion"? It could be that this, even more so than Thanos, is what the whole MCU has been building towards ever since the first Iron Man. Marvel clearly went out of their way to get the Skrulls, so they're not just going to be one-off villains for this movie. They're here for the long haul, and that means we'll probably be getting the Secret Invasion in one form or another.

What do you think? Do you like the idea of Captain Marvel being an origin film set in the 1990's? What do you think of the Skrulls being in this movie? Is this laying the groundwork for an adaptation of Secret Invasion later on down the line? Were you happy with San Diego Comic Con this year? Leave your thoughts in the comments section below.