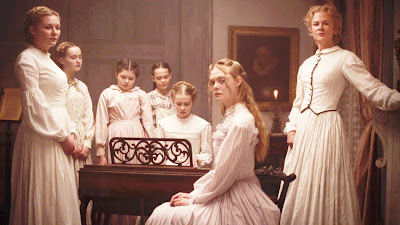 I went into The Beguiled with reasonable expectations. I had never seen the original film, nor did I know the larger story. So my expectations came from what I saw in the trailers. From those trailers, I thought we would be getting a creepy, disturbing film with good performances and great direction. That there would be some sort of big reveal regarding the school. That throughout the entire movie, we would be sitting there wondering what is up with these girls? That Colin Farrell's character would become a victim of their debauchery and villainy. That idea really caught my imagination, and I thought there was so much you could do with it, and I was excited to see what avenue this film would ultimately take. Sofia Coppola is a talented director, and I was also just excited to see her next film. She has made some excellent movies in the past, so there was no reason for me to think this one wouldn't join the ranks. This film has a really stacked cast, as I love all the actors involved. I thought there was an excellent opportunity here to see some really strong performances. So all around, I went into The Beguiled expecting a lot, and relatively excited. And I was left rather disappointed. The Beguiled suffers from terrible pacing and a slow burn that ultimately doesn't add up to anything worth watching the movie for.

During the Civil War, a wounded Union soldier (Farrell) finds himself at an all-girls school in the heart of the South. There, the girls take their turn becoming infatuated with the soldier, until things take a darker turn. 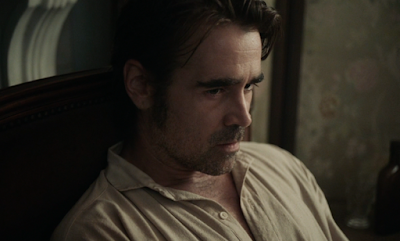 This movie is boring as sh*t. It just is. It's a slow film, and I can appreciate slow movies. Alien is one of my favorite movies, and it's incredibly slow. What makes a slow movie work is that it has a pay-off at the end. It's slow, yes, but it all builds to something. And when you have good pay-off, then you can not only accept the slowness, but you come to appreciate it. With The Beguiled, there is no pay-off, at least for me. I'm not going to spoil the ending, but what it amounts to is not worth sitting through the movie. The film is only an hour and a half, and yet it felt more like two and a half hours. That is due to the terrible pacing. I found myself constantly looking around the theater, barely engaged with what was going on on screen. Yes, the visuals are stunning. The cinematography is excellent, and the costume and production designs are impeccable. I was riveted for the first two minutes of the movie, because all it was was beautiful exterior shots. The camera angles caught my attention, and I was hooked. Then the characters opened their mouths, and it lost me. While the dialogue is true to what would have been spoken during this time period, there is just nothing engaging about it. There was nothing interesting going on, both in what the characters were saying and in what they were doing. There's only so much that beautiful cinematography can account for, and it did very little to save this movie for me. Where things could have been rectified was with the performances. Had we gotten fantastic performances, I may have been able to forgive the story and pacing elements a little bit more. But the performances are simply fine. They're not bad in any way, but they don't stand out. Colin Farrell, Nicole Kidman, Elle Fanning, are all brilliant actors, and are fantastic in other movies, but here their performance are simply average. Where they could have given us deep, emotionally-driven performances that would have saved the movie, their performances were ultimately just sub-par.

I had a very different impression of what this film was going to be based upon the trailers. I wasn't exactly expecting a horror movie, but I thought it would go in a more supernatural route. I thought there would be some larger reveal about what is really going on at the school, and Farrell's character would become their victim. Instead, Farrell comes off as a complete asshole, and the girls are actually his victims, subject to his emotional and physical abuse. There is no twist; there's no secret reveal. What you see with the trailer is pretty much what you get. Again, keep in mind that I never saw the original, nor did I know the story. For someone who loved the Clint Eastwood original, and was looking for a retelling of it, you may have been completely satisfied with this film. But this was not the movie I thought it was going to be, and I found it to be rather dull. In fact, it plays as a film that would work far better if it were made in the 1970's. I think it was far more fitting of that period of filmmaking, and I almost want to see the original, to see if I actually enjoy that version. But this 2017 version, the movie I saw in theaters, just did not work for me. Something happens to Farrell's character that isn't overly startling, and I won't reveal it, but I found his reaction to it to be completely exaggerated. When you consider what his profession is and what has happened to him already in the movie, you realize that he was completely overreacting, ridiculously so. There are a couple of scenes that genuinely build tension in this movie, such as the final scene, which I found to be the best part of the movie. It was Hitchockian in nature, and it was fantastic. But these scenes are few and far between to completely salvage the film. 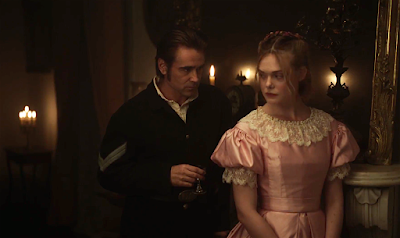 Overall, The Beguiled is a very, very slow movie that doesn't really amount to anything. There's no true pay-off for the audience, which makes it incredibly hard to watch this movie. It's only an hour and a half long, and yet it feels an hour longer, mainly due to the poor pacing. This movie drags along, and it's hard to sit through. There is beautiful cinematography, and incredible production design. But this does little to remedy the story and pacing issues that largely overshadow the movie. The dialogue, though true to the time period, is utterly bland. It's hard to become enraptured with it, because there is nothing to grab hold of. Where the performances could have saved the film, they turn out to just be sub-par. These are all brilliant actors, capable of award-winning performances. And yet, they are simply fine in this movie. I never saw the original film, but from the trailers I expected this to go in a different route. I didn't take it at simply face-value. I thought there would be a bigger reveal, some sort of supernatural twist involving the true nature of the school. But there is none. What you see is what you get, and it's overly disappointing. This is a remake of a movie from the 70's, and I think it works better as a product of the 70's. This style of storytelling and filmmaking works better for that period, and I think the original probably holds up better than this remake. But The Beguiled, this version of it, just does not work, and pretty much falls flat. 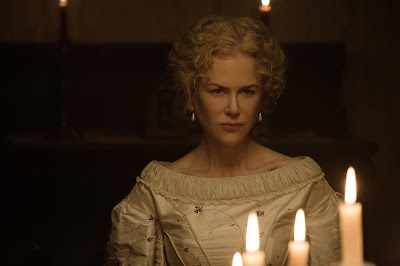 What do you think? Have you seen The Beguiled? Did you like the film? Leave your (spoiler-free) thoughts in the comments section below.