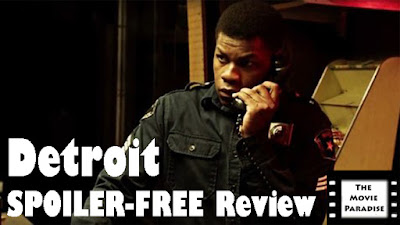 Detroit is a film that has been on my radar for a while, but hasn't necessarily been a movie that I've been super excited for. On the surface, it looked really good. The trailers were intriguing. It has some fantastic actors, including John Boyega, Anthony Mackie, Will Poulter, and John Krasinski. It also has an incredibly talented director in Kathryn Bigelow. The source material also has not really been explored much on film, and thus is very ripe for a cinematic telling, especially in today's political climate. So there were a lot of pieces in the right place, and in retrospect I don't know why I wasn't more excited for this film than I actually was. I guess I just wasn't expecting it to be as great as it is. Detroit is a devastatingly phenomenal film that packs a hell of a punch, and is incredibly effective in ripping your heart straight out of your chest.

During the events of the 1967 Detroit Riots, we follow a group of African American teenagers being brutally terrorized by the police. 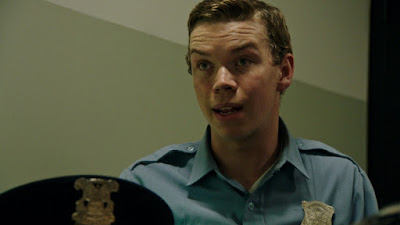 I saw this movie about a week ago, right after the events that took place in Charlottesville. I think that certainly added to the visceral and emotional reaction I had while watching Detroit. Bigelow made a really smart decision in containing and isolating the story. I thought this movie would be covering the entire Detroit riots, but instead it focuses on one individual experience. This allowed me to become very attached to these specific characters, and to feel the true weight of this one experience. And this one experience really does help define and give context to not only these riots, but to the formation of such things as the Black Lives Matter movement that is happening today. This was a really smart direction to take the story in, and it absolutely pays off. Bigelow also makes the decision to film mostly handheld, which I found to be incredibly distracting for the first ten minutes. The camera was constantly shaking, switching between being in focus and out of focus. Due to this, I was finding it hard to get into the story. But once we got into the actual meat of the movie, the one event that the film spends the majority of its running time on, I saw what she was going for. The use of handheld cameras helped allow the audience to submerge themselves into the event, so that they could feel like they were right there with the characters. And once we actually got into the movie, I found this filmmaking decision on Bigelow's part to be genius.

The performances are all fantastic. Algee Smith and Jacob Latimore are actors I'm not very familiar with, but they did excellent jobs leading this movie. I thought John Boyega would be the lead, and he's not. He takes a much more subdued role, but it works in that it allows Smith and Latimore to really shine. Boyega is good in this, but I don't think he was given enough to do for us to truly see just what he's capable of as an actor. I'm glad he's getting roles outside of Star Wars, but I still think we have yet to see the full extent of Boyega's acting capabilities. John Krasinski is barely in the movie, but he is good in the scenes he's in. He's definitely not Jim Halpert in this, so I appreciated having a chance to see his range. Let's talk about Will Poulter. My friend, who had seen the movie before I did, asked me right after I came out of the theater whether I thought Poulter's performance was Oscar worthy. And I honestly couldn't give him an answer, because I was so struck by just how despicable and vile Poulter's character was that I had a hard time differentiating it as being a performance. That is a true testament to how great Poulter is in this, that you can so easily forget that it's actually a performance. And it's strange to say this, but they didn't make Poulter a one dimensional, evil person. They gave him nuance and depth, to the point that you could begin to understand his mindset of why he was doing some of the things he was doing. It helped to make him an even more formidable antagonist. 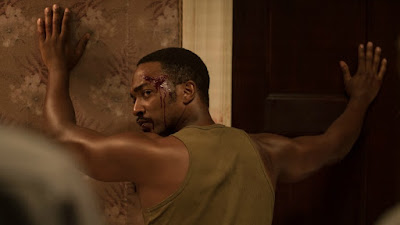 There is some beautiful animation in the very beginning of the film, but they also have text at the bottom giving context to the riots. I wanted to look at the animation, but I was missing the text they had. I had to choose which one I wanted to focus on, and I chose the text. As a result, I missed this fantastic animated sequence that animators had spent countless hours developing. This beginning part could've been done a little bit better, because I don't think it really had the impact Bigelow intended. I also think the first 15-20 minutes of the film are unnecessary. It takes a look at the Detroit riots as a whole, and how it all began. And it takes some time before we actually meet the main characters, and for the story to actually focus. It felt like a bunch of extra stuffing that we didn't need, and I think the movie would have been leaner and even more impactful had it been a bit more concentrated. You could have had some text explaining the background on the riots, and then kicked right off with the main characters. It was hard to get into the beginning, because I couldn't really see where they were going with it. But once the story narrows its focus, I was immediately hooked.

Overall, Detroit is mesmerizing and awful, but in a good way. I sat in the theater with my hand covering my mouth, filled with anger about what was happening. It's the same kind of visceral reaction that I had when I saw 12 Years a Slave and Selma. And like the former but unlike the latter, I don't think I could rewatch Detroit. I am so glad that I saw it, and it's a film worth watching. But it is so devastating and heartbreaking that I don't want to go through that again anytime soon. The decision to narrow the story, and the choice to go all handheld with the cameras, was really smart and did nothing but enhance the viewing experience. They both made for a more powerful movie. The performances are also spectacular. Algee Smith and Jacob Latimore are actors I'm not overly familiar with, but they were excellent in this film. I wish John Boyega and John Krasinski had a little more to do in the movie, but they were really good for the time they were on screen. When watching the film, I had a hard time seeing Will Poulter's performance as an actual performance, which just shows how excellent he is in this. The beginning animated sequence could've been done better, and I think the first 15-20 minutes could've been cut out entirely to make it a leaner film. But in the end, Detroit is right now my second favorite movie of the year, and will undoubtedly end up on my top ten list of 2017. 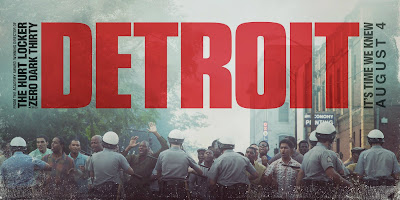 What do you think? Have you seen Detroit? Did you like the film? Leave your (spoiler-free) thoughts in the comments section below.