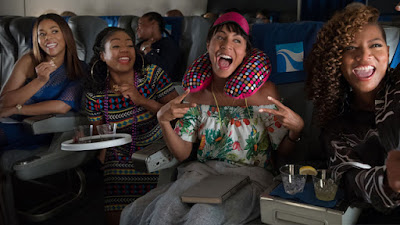 Leading up to its release, I had zero interest in seeing Girls Trip. The trailers didn't really seem that funny to me, and there was nothing really compelling me to go see it. However, it ended up with an 88% on Rotten Tomatoes, showing that most critics actually did like the film. I also heard from certain critics that I read and respect a lot that the movie was absolutely hysterical, and that it is one of the best comedies of the year. So all of that combined made me actually interested in going to check it out. I wasn't losing my mind about it; I went in simply wanting to be entertained, and to laugh. That's all. I wasn't looking for a masterpiece of comedic filmmaking. I wasn't looking for excellent characters, a great story, and truly thought-provoking social questions. I just wanted to laugh. And, unfortunately, this movie couldn't even do that. Girls Trip is the worst comedy I've seen this year, and is just a boring, lifeless, empty movie. But there is more to the story than just that, mind you. I'll better explain what I mean later on in the review.

After being separated for five years, four friends reunite to go on a girls trip in order to kick back and relax. But things quickly get out of hand. 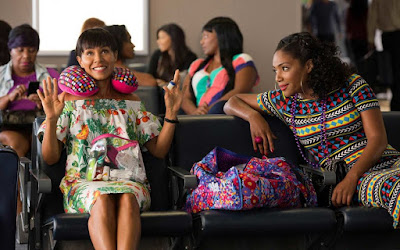 This is going to seem contradictory to the rest of my review, but I am glad this movie is as successful as it is, and is making a lot of money at the box office. On a $19 million dollar budget, it has so far made $106 million dollars worldwide. I do not like the movie very much, but I am without a doubt happy for its success, and for a couple of reasons. Just like with Wonder Woman earlier this year, Girls Trip helps disprove the stigma that movies with female leads do not and cannot make as much money as movies with male leads. Both films (relative to their budgets) have been insanely profitable. It also gives us an all African American cast, which you don't see very often in movies, let alone comedies. So for a comedy to come out with an all black female cast, and for it to be as incredibly successful as it is... it's ultimately heartwarming. It's another crack in the archaic Hollywood mindset that has persisted for decades, and it opens the doors for more movies down the line that can increase wider diversity and give the spotlight to different stories. So I will be getting into why I don't like this particular movie, but know that my views on the film are entirely separate from my thoughts on its box office success. The comedy in this movie just did not work for me, but I am still very happy that it is as successful as it is.

With all of that said, I think I maybe laughed once during this film. I'm not even sure if I laughed, but I think I must have at some point. Maybe it was a mild smirk. This movie tries to be The Hangover, but it doesn't have nearly the same charm. Most of this movie's humor comes from the characters simply cursing or making sexual references, but there's nothing new about it. Other comedies do the same thing, of giving us swearing and sexual references, but they find ways to reinvent it and make it new. Girls Trip just has its characters swear, and expects that you're going to laugh. But there's nothing new or fresh about it. It's not reinvented in any way. This may be an unfair assumption, and someone please correct me if it is. But I think this is a more appealing movie to women than it is to men. I think the movie's success comes from women finally getting to see themselves represented in a movie that would traditionally star men. And I think it's fantastic that we are getting this. I mean, how many times have we seen the classic story of old childhood friends going away somewhere to celebrate, but starring male actors? It's very rare to see women in that role, let alone black women. So it is refreshing in that sense, and I think that is why it is as popular and successful as it is. And I think women may get more out of this movie than men will, because I think it is inherently tailored to be aimed at women over men. And that's fine; there's nothing really wrong with that. But I just didn't get much out of this movie, personally, as a man. A film like Bridesmaids found the right balance to tell a story starring women in roles more traditionally held by men, but also appealed as a film to both men and women. But that is incredibly hard to do. So I don't blame Girls Trip for not being able to do it, because it's nearly impossible to pull off perfectly. It just means that I personally didn't really like the movie all that much. But I can totally see why there are people who love it, and I am not discrediting how important of a movie Girls Trip really is. 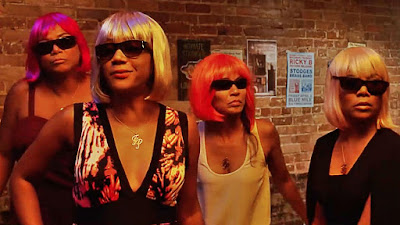 Overall, Girls Trip was a disappointment for me. I was hoping to be entertained and to laugh, but I didn't find any of that with this movie. I am incredibly happy for the film's success, because it breaks down both gender and racial barriers that have stayed up in Hollywood for far too long. And it opens the doors for more movies telling more diverse stories to be made. So while I was not personally a fan of this film, I am excited by what its success means for the future. I do think there's more in this movie for women to enjoy than there is for men, which is not a bad thing. There are plenty of movies tailored strictly for men, with little appeal for women; there's no reason women can't get the same thing. All it means is that I saw a movie that I didn't particularly enjoy nor like. But what Girls Trip means in the long run far outweighs my personal enjoyment of the movie. Look, is the filmmaking behind Girls Trip really that terrible? No, it isn't. But when it comes to a comedy, all you have to do is make me laugh. And if I barely laugh, and find no real enjoyment or entertainment in a comedy, then it becomes a very aggravating experience. So while I wouldn't say that it's necessarily a God-awful film, the fact that I did not laugh or chuckle once is ultimately damning. In the end, Girls Trip is my least favorite comedy of the year, and will probably end up on my list of my worst films of 2017. But that does not take away from how incredibly important this film is, and what its success truly represents and means. 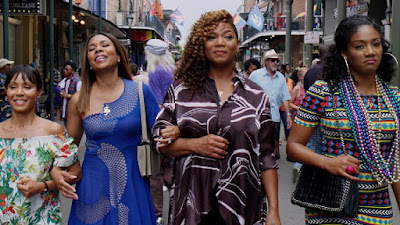 What do you think? Have you seen Girls Trip? Did you like the film? Leave your (spoiler-free) thoughts in the comments section below.