I remember hearing about Annihilation being developed a while ago, and the premise sounded interesting. It centers around a biologist (Natalie Portman) who discovers this area on Earth where the laws of nature do not apply. Simply as a concept, it sounds absolutely fascinating, and it seems like something that would be very rich to explore on screen. But what caught my eye the most, however, was the fact that it was coming from Alex Garland, who wrote and directed Ex Machina. I thought that film was fantastic, and a lot of that movie's strength came from Garland's writing and direction. So the idea of seeing his sophomore effort naturally excited me. Ex Machina was certainly a science fiction film, but it dealt more with social issues, using science fiction as a back-drop. Annihilation sounded like it would be full-on sci fi, and I was excited to see what Garland would do with that. He has explored the genre a lot with his scripts, but to see him delve into a rich sci fi world with one of his directorial installments was an exciting prospect. Since I first heard about the movie, I had entirely forgotten about it. However, we now have the first trailer for Annihilation.

This teaser trailer is incredibly captivating, without revealing anything really about the plot. I got a very strong Arrival feel from it, and maybe a little too much so. However, I think it will even out when we see the actual film, and this will end up feeling like its own movie. It's just hard to not draw the comparison when watching this trailer. Aside from that, I was absolutely hooked. The visuals were stunning. The use of color and imagery entirely drew me in. It felt like this trailer was inviting me to come and experience all it had to offer. You definitely get the feeling that there's so much more going on in this film than what we're seeing in the trailer, which is something that is lost on many modern-day movie trailers. The cast across the board looks great. Natalie Portman is an on-and-off-again actor for me. Sometimes she mails it in (Thor, Star Wars), but when she's on, she's absolutely on (Black Swan, Jackie). I'm leaning more towards this one being one where Portman turns in a fantastic performance. You also have Oscar Isaac, Jennifer Jason Leigh, and Tessa Thompson, who are all great actors that never truly get the full spotlight, but always turn in great performances whenever they're on screen. But it's Garland's direction that stands out to me most from this trailer. It looks like he has a great handle on this world. From the visuals to the intrigue, this first teaser for Annihilation really got me on board, and I can't wait to see what Garland does with the film. 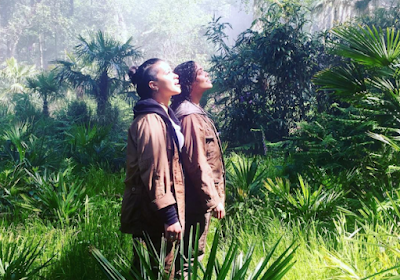 What do you think? Did you like the first trailer for Annihilation? Are you looking forward to seeing the film? Leave your thoughts in the comments section below.