Battle of the Sexes SPOILER-FREE Review

With Battle of the Sexes, you have Oscar winner Emma Stone and Oscar nominee Steve Carell, which is exciting to think about in of itself. We saw them before on screen in Crazy, Stupid, Love, but this film will have them together in an entirely new context. The film explores a famous tennis match in the early 70's orchestrated to have the "man's man" go up against the feminist. This wasn't just about tennis; it was about showmanship, and more importantly, it was about furthering women's equality in society. Other than the story, what drew me in from the trailers was the performances. This looked like a perfect role for Steve Carell; he could incorporate a lot of his comedic sensibilities, while also adding the dramatic flare that he's been developing over the past few years. And this looked like a completely transformative role for Emma Stone, who I'll see in anything after what she did with La La Land. With a compelling story and great actors, I went into Battle of the Sexes incredibly excited. While it's not a phenomenal movie, Battle of the Sexes does it's job in showcasing the acting talents of both Emma Stone and Steve Carell, and gives us a solid and entertaining film.

In 1973, tennis champion Billie Jean King (Stone) and ex champ Bobby Riggs (Carell) went head-to-head in what was referred to by the press as the Battle of the Sexes. 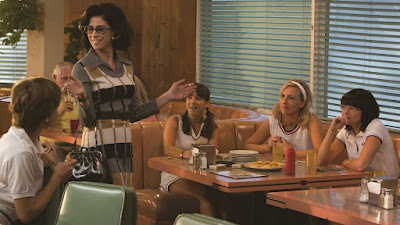 The trailers gave us the impression that this movie would be a joint effort by both Steve Carell and Emma Stone, but this is truly Stone's movie. She gives a really good performance here, and certainly leads the film. I don't think it necessarily tops her Oscar winning performance in La La Land, but it is a remarkable one nonetheless. She brings a lot of the realism and the subtly to the movie, whereas Carell adds the complete opposite. All the positives I stated before about Carell taking on the role of Bobby Riggs was validated. He very much has the Michael Scott-isms that make him such an unstoppable comedic force, but he also incorporates some of the dramatic elements we've seen from him before in movies such as Foxcatcher. And really, I don't know if this movie would have worked if Carell was a co-lead. He is so eccentric and so out there that I think the shtick would have gotten old and annoying really fast had he been in as much of the movie as Stone was. By making Stone the lead, you have a much more grounded entry into the film, and Carell's performance is enhanced by it only being a supporting role. You have other good supporting performances in this film, from Sarah Silverman and especially from Bill Pullman. But the focus of the movie is on Carell and Stone, and that is why their performances stand out as much as they do.

One of the strongest aspects of this film, aside from the performances, is how well it captures the look and feel of the 70's. Not just in terms of the costume and production design, but also with the political and social climate. The blatant sexism is disgusting to watch, but it is so entirely true to the mindset of that time (and unfortunately, of this time as well). This is why Bill Pullman was such a integral character, because he was the face of the alpha male terrified of women being his equal. I wouldn't say this is exactly a feminist movie, or a film with an agenda. Rather, I think it is showcasing the ideology of a woman who was a feminist and who was bi-sexual, a fact I did not know about King beforehand. It's incredible to see the boundaries she pushed back in the 70's, and it gives context to why this one tennis match was as important as it was. In terms of negatives, I think the film took a little bit too long to get into the actual tennis match. It takes its time to develop Billie Jean King as a character, which I did appreciate, but I think it spent too much time on this part of the story. Battle of the Sexes could have been improved by a better and faster pace. And that is really my one true negative: the pace. If it was a sharper and leaner film, I think this could've been one of the best of the year. But because it takes more time than it needs to to get to where it's going, it settles for just being a really good movie. And there's nothing inherently wrong with that. 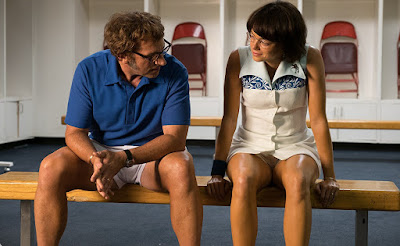 Overall, Battle of the Sexes is as good as it is because of the fantastic performances by Emma Stone and Steve Carell. Stone does a great job leading this movie, and turns in another wonderful performance. The role of Bobby Riggs perfectly utilizes Carell's strengths as both a comedic and a dramatic actor, and makes for a scene-stealing supporting performance on his part. Sarah Silverman and Bill Pullman also turn in good supporting performances, though the focus (and rightfully so) is on Carell and Stone. The film also does a great job of capturing the atmosphere and climate of the 1970's. The rampant sexism is angering to watch, but it really makes you understand why this one single tennis match had as much weight behind it as it did. Unfortunately, the pacing nullifies as bit of the movie's punch. It stalls a bit in the first and second act, taking too long to get to the actual tennis match. This movie would have been greatly improved had it cut out a lot of the excess and focused solely on the tennis match. In the end, Battle of the Sexes is one to see for its riveting performances, but the film as a whole falls short of being one of the best of the year.

What do you think? Have you seen Battle of the Sexes? Did you like the film? Leave your (spoiler-free) thoughts in the comments section below.