Ever since he first popped up in Captain America: Civil War, I have been excited to see Chadwick Boseman in his own standalone Black Panther movie. He was so well realized in that film, that it only made me want to learn more about him. And with the talent brought onto Black Panther, how could you not be excited? You have Creed's Ryan Coogler directing, and with Michael B. Jordan, Lupita Nyong'o, Martin Freeman, Forest Whitaker, Andy Serkis, Angela Basset, Daniel Kaluuya, and Phylicia Rashad rounding out the cast, this is going to be one hell of a film! We had a trailer drop a few months back, and I liked it a lot. The production and costume design looked phenomenal, as did the action choreography. It was a really good trailer, and I enjoyed it. But my biggest criticism was that most of the CGI wasn't finished, which is expected for a movie that was still months and months and months away from being released. And with the movie's February release date, and Thor: Ragnarok being only a few weeks out, it made sense for us to now get another Black Panther trailer. I was more expecting an Avengers: Infinity War trailer, but a Black Panther trailer does make sense, as it comes out sooner than Infinity War. And today, we got that new trailer for Black Panther.

I liked this trailer a lot. I think I have the same praises and criticisms as I did for the last trailer. Once again, the design of everything is beautiful. Coogler has really made Wakanda feel like a genuine, fleshed out place. I love the look and feel of everything, from the costumes to the technology. I think Wakanda will be one of the best locations put to screen in the Marvel Cinematic Universe, and I'm exciting to explore it. The performances all look great. The second I heard Chadwick Boseman speak, I got a smile on my face. He's going to crush it. We also get to see a little more of Michael B. Jordan, and his connection to Andy Serkis. While Serkis had a large role in the last trailer, I thought they were just showing most of his scenes, as his film War for the Planet of the Apes was coming around the same time that the trailer dropped. But he's also in a lot of this trailer, and it looks like he'll be just as much of a villain as Jordan will be. That gets me excited, because I always like seeing Serkis in non-motion capture roles. Don't get me wrong; he's great when he's Gollum or Caesar, but I feel like he's often overlooked as just being the mo-cap guy, and not for being the truly tremendous actor that he is. Again, my biggest issue with this trailer was the CGI. It doesn't look done yet. Now, the movie is still four months out, so they have time to fix it. But I said the same thing about Beauty and the Beast, and the Beast's CGI looked just as bad in the final film as it did in the trailers. So for that reason, I'm nervous for this movie. Other than that, I really liked this trailer, and I can't wait to see Black Panther! 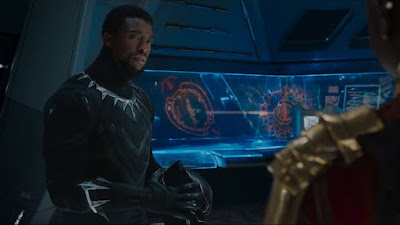 What do you think? Did you like the new trailer for Black Panther? Are you looking forward to seeing the film? Leave your thoughts in the comments section below.