Ever since it was first announced, I have been apprehensive about Bright. While Netflix has had some good original films, such as The Meyerowitz Stories (New and Selected) [read our review here], they have also had plenty of sh*tty original movies. I don't think Netflix has quite locked down how to do their original movies yet, and so anything that they put out I'm immediately cautious of. But Bright has more going against it than just that. It is also directed by David Ayer, who I'm mixed on as a director. While he's had some great films with End of Watch and Fury, he has also had some absolutely horrendous movies with Sabotage and Suicide Squad. He's a director who I can't immediately get excited for anymore, because I never know exactly what kind of film he is going to give us. We've had one trailer for Bright so far, but it was a teaser trailer. It didn't give us enough of a taste of the film to know exactly how it's going to play out. But now we have a new trailer, which gives us a much better understanding of what this movie is going to be like.

This is an okay trailer. I was really into it for the first half, when we're seeing the dynamic between Will Smith and Joel Edgerton. I think they have great back-and-forth, and it was entertaining to watch. But as soon as we got into what the plot of the movie will be, centering around a wand, I checked out. Seriously? A f*cking wand? Give me a break! They took all this time to set up this dark, gritty world, with Will Smith throwing F-bombs around left and right, and then you have him saying lines like "We have to protect the wand!"? It just made my eyes roll. This part of the trailer was very reminiscent of my problems with Suicide Squad, and I hope this movie doesn't go down the same path. Bright looks like it's going for The Lord of the Rings meets Lethal Weapon, which I think could be a fascinating combination. If the movie in its entirety focuses on the first half of this trailer, then it could be incredible. But there are warning signs in this trailer that make me think it will be more Suicide Squad than End of Watch, which makes me nervous. Also, this looks like it's going to be a big scale action movie, and it frustrates me that it will be on Netflix. I think Netflix's original films have their place, but this is the kind of movie that I would want to see in the theaters! I'm hoping that doesn't end up working against it. So, overall, I'm mixed on the trailer, but I'm hoping for nothing but the best for Bright when it comes out later this year. 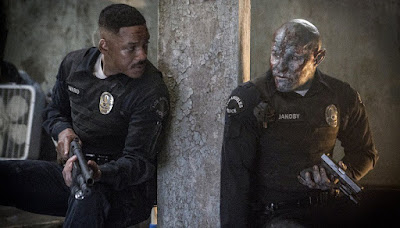 What do you think? Do you like the second trailer for Bright? Are you looking forward to seeing the film? Leave your thoughts in the comments section below.