I still am not entirely sold on Justice League. After the shortcomings of Batman v. Superman: Dawn of Justice and Suicide Squad, I became kind of checked out of the DC Cinematic Universe. Wonder Woman came out, and it was great! It showed me what DC could be with the right amount of care and attention. But this did little to ease my apprehensions towards Justice League. Then, we had the unfortunate tragedy that forced Zack Snyder to step away from the film, with Joss Whedon coming in to help finish the movie. While many are convinced that the extensive reshoots and Whedon's revisions are for the best, I can't help but worry that we'll end up with a mess of a movie. Snyder and Whedon have radically different directing styles, and I'm not sure if the film we'll get will be a perfect amalgamation of their visions. So I'm not going into Justice League with super high expectations, thinking it will be revolutionary. This could end up being a good thing; with low expectations, Justice League could very easily surprise me. At the same time, it also has a good shot at being a mess of a film, and critically bombing like Batman v. Superman and Suicide Squad before it. Which it'll end up being I can't exactly say for sure, but now we have our third trailer for the film.

I really liked this trailer. I loved the opening of it. Putting the action on pause and focusing on the emotional repercussions of Superman's (Henry Cavill) death showed a different side of this film to me, one that I haven't seen in the marketing yet. It is an important element of this movie that I hope isn't glossed over, and from the looks of this trailer, it seems like they'll really be getting their hands dirty with it. From there, it's still the standard giant action sequences set to some rock song that we've seen in all the other trailers thus far. It's not that it looks bad in any way; it's just that I've seen so much of it from the marketing. I liked the beginning as much as I did because it showed me something new about this movie that I hadn't seen before. I hope this movie isn't just a two hour fight sequence. We've seen that tried before in films like The Hobbit: The Battle of the Five Armies, and the result is a cool looking movie that's ultimately emotionally hallow. While I would say that I did  enjoy the trailer, I'm still on the fence about the final film. It could end up being a really fun ride, or it could just as easily end up being a complete mess. Either way, we'll have to wait and see what it turns out being when it opens in theaters next month. 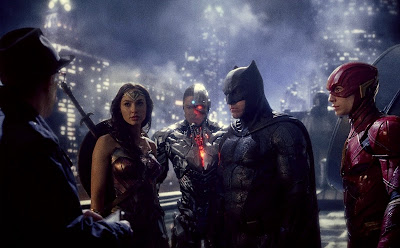 What do you think? Did you like the third trailer for Justice League? Are you looking forward to seeing the film? Leave your thoughts in the comments section below.