I wasn't that big of a fan of the first Pacific Rim. It was too long, with too much focus on building a story that I was not invested in whatsoever. The action was scarce, and there was not enough of it to warrant the rest of the movie. It was simply okay, when I wanted it to be truly awesome. So since it was first announced, I haven't been overly excited for a sequel. Although, they did take a couple steps in the right direction. John Boyega was brought on to lead the film, and I'm happy to see him getting work outside of Star Wars. The man is incredibly talented, and he deserves it. I also thought that having Steven S. DeKnight direct was an interesting choice. He has never directed a film before, so it does make me nervous that he's starting out with as big of a film as Pacific Rim: Uprising. However, he has had a lot of success in television, having a hand in series such as Spartacus, Smallville, and the first season of Daredevil. This does not immediately qualify him to handle a giant blockbuster film, but it does prove that he has had a lot of experience at least with TV. And considering he wrote a lot of the episodes on those shows, it does get me excited to see what he did with the Uprising screenplay. So while I do have my reservations about Pacific Rim: Uprising, I have been mildly interested in it. And now we have our first trailer for the film.

I was surprised by how much I actually liked this trailer. Don't get me wrong; this isn't the trailer of the year or anything like that. But it looks like Uprising will simply be a fun time at the movies, and nothing more. And there is something to be said about that kind of cinema. It isn't trying to force a convoluted story down our throats. It just simply gives us fun action that he can leave our brains at the door for. This honestly looks like the kind of movie that Transformers should be. Now, this film could easily backfire. You walk a tight line when making a purely spectacle movie. You can make something that's just brainless fun, and then you can accidentally make something like what Transformers has turned out to be. It seems to me that DeKnight knows what Pacific Rim should be, and that's why I have faith that he can make a simply fun film. However, the fact that he's never directed a movie before could lead to some serious problems. But when I watch this trailer, it looks competently put together. I can't say for sure whether the film will benefit or suffer from DeKnight being a first time director, but from the looks of this trailer, it seems like they're on the right track. I do have to say, though, that I did not like the music in the trailer. Trailers nowadays feel like they have to include some popular song that has nothing to do with the actual movie, and it ruins a lot of them for me. I like everything that visually happened in this trailer, but I'm going to be annoyed hearing that song again and again. I wish studios would realize that not every trailer needs some famous song in there for us to be interested. If it's a well crafted trailer, we'll be on board. Regardless, we'll have to wait and see how the movie turns out. 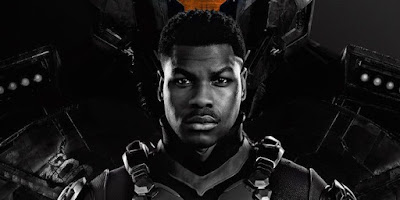 What do you think? Did you like the first trailer for Pacific Rim: Uprising? Are you looking forward to seeing the film? Leave your thoughts in the comments section below.