I always have to begin my Star Wars-related articles by saying that I am not a blind Star Wars fanatic. Sometimes that is misinterpreted as being that I hate Star Wars, which is the furthest thing from the truth. I am a big fan of Star Wars; I just am not blind to its problems, or am immediately excited for the next film simply because it is a Star Wars movie. So when the first trailer for Star Wars Episode VIII: The Last Jedi dropped, I didn't lose my mind over it. We were promised by Kathleen Kennedy a full trailer, and what we got was a teaser trailer that told us nothing new. It could have all been footage from Star Wars Episode VII: The Force Awakens for all I knew. I think many people loved that trailer simply because it was Star Wars, rather than what was actually in the trailer. But for the film as a whole, I am incredibly excited. It's not my most anticipated of December (that would have to go to The Disaster Artist and The Shape of Water), but I am excited to see what Rian Johnson does with the film. He is a far different director than LucasFilm has collaborated with thus far, and I'm sure he'll give us a far different Star Wars movie than we've gotten before. And that is undoubtedly a good thing. So with the second, full length trailer, I was excited to see exactly how different it'll be from what we've gotten before. And now we have that new trailer.

This is a pretty good trailer. It still felt underwhelming, in terms of what it was hyped up to be. I do think it was better than the last one, but it wasn't mindblowing in any capacity. You definitely do get a better sense of how this will be different from what we saw in The Force Awakens. While it visually has the same aesthetic, there are a lot of differences. It looks like we'll be getting a deeper and more complex characterization of Kylo Ren (Adam Driver), which I am really looking forward to seeing. Mark Hamill wasn't in this trailer all too much, but I do have a feeling he'll end up stealing the movie. I was really hoping to see him ignite a lightsaber, but I guess we'll have to wait to see that until the movie hits theaters. There has been a lot of speculation that Rey (Daisy Ridley) will be turning to the dark side, and one of the final shots of the trailer seems to point to this, when Kylo Ren extends his hand to her. I do think, however, that if the big twist of the movie was that Rey turns bad, then they wouldn't have seriously hinted towards it in the trailer. LucasFilm is certainly smarter than that! So, simply because they hinted towards it, I think it's safe to say that Rey will not be turning to the dark side in this film. Overall, I wouldn't say this is a fantastic trailer, but it showed me enough to get excited for the movie. I'm very interested to see what Rian Johnson gives us come December. 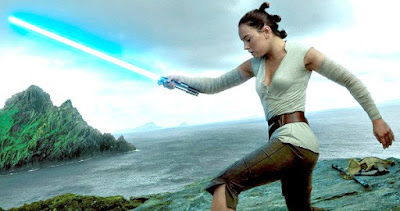 What do you think? Did you like the new trailer for Star Wars Episode VIII: The Last Jedi? Are you looking forward to seeing the film? Leave your thoughts in the comments section below.