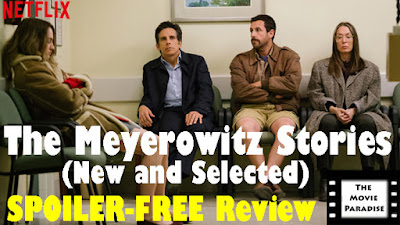 I've actually been looking forward to seeing this film for a long time now. I've been intrigued by the concept ever since I first head about it. Adam Sandler is a guy who I detest as a comedian, but who I think is absolutely brilliant as a dramatic actor. I still stand by my claim that he should have been nominated for Best Lead Actor at the Academy Awards for his role in Reign Over Me. He was phenomenal in that! So to see him return to a dramatic role here was an exciting prospect. Ben Stiller is another comedian who I think is talented at doing drama. I find him to be a lot better at comedy than Sandler is, but whenever Stiller takes on more dramatic roles, I'm always interested to see what he does with them. And, of course, Dustin Hoffman is Dustin Hoffman. To see all these actors, of varying degrees of talent and stature, come together for this one movie is truly remarkable. It also happens to be a Netflix original film. I haven't been on board with Netflix's original movies yet. I did not care for The Discovery or War Machine, and I didn't even bother to see some of their other misfires. So while I was excited by the concept, I was hesitant because of Netflix's involvement. But I found myself to be pleasantly surprised. The Meyerowitz Stories (New and Selected) is not a perfect film, but it is a really good one that delivers on some remarkable performances and some multi-layered depth.

All grown up now, half siblings try to make amends with themselves and with their father (Hoffman), in the face of some terrifying health scares. 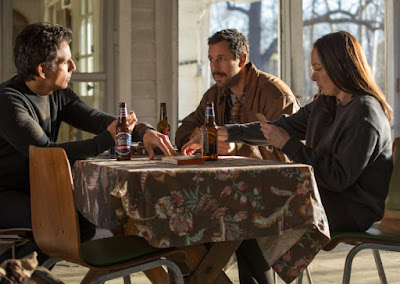 At first glance, this film comes across as very surface level. You're simply following different members of one family as they live their lives; there's nothing innately profound in that. But beneath the surface, there's all of this bubbling emotional depth that makes this a very rich film. While you're only witnessing a snapshot of these people's lives, you get such a well-rounded understanding of what their whole lives have been like. Without you realizing it, you're given fleshed out, three dimensional characters, a rich and detailed history between each of the characters, and a compelling story that you want to see more of. Writer/director Noah Baumbach very subtly gives you all of this depth that does not appear to be there, and it makes for a far more thought-provoking movie. With that, the film is incredibly arcane, as you know that there is a lot more between the lines of the film, but it's hard to discern what exactly it is. And maybe Baumbach doesn't want you to know everything. Maybe a lot of things are meant to stay in the dark, which makes this a really interesting and compelling film to watch. Many will watch this movie and see it as surface level. It may even come across as boring to some, just because nothing monumental happens plot wise. All of the exciting moments come from inter-personal character moments and revelations, and seeing family dysfunction and dynamics play out on screen.

The performances are also great all around. Adam Sandler is not nearly as good in this movie as he was in Reign Over Me, but he still turns in a really good performance that shows me his strength is definitely in drama, not in comedy. I really want him to keep taking on dramatic roles, as he gives us far more substance with these kinds of movies than he does with making his Sandy Wexlers or whatever the f*ck he does. Ben Stiller is also great in this film. He has one scene where he attempts to cry, and it's probably one of the worst attempts at crying I've seen from an actor in a film. But with that aside, Stiller is really good in this movie. Dustin Hoffman turns in a great performance, even though he is not in the movie as much as Sandler or Stiller are. When he is on screen, however, he brings it as he always does. Getting to see the chemistry between Sandler and Hoffman, or Hoffman and Stiller, was riveting to watch. It seemed like they were thriving playing within this much more subdued story, where the focus was on their dialogue and their performances, rather than on some overarching plot. It very much felt like a play, and I think Sandler, Stiller, and Hoffman all did a great job in making this movie work. 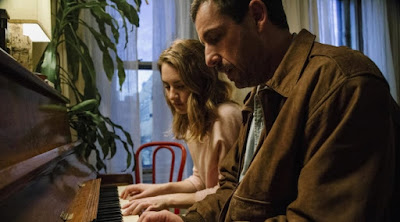 This does have a few things that keep it from being a fantastic movie. There are some very strange and eccentric editing decisions. They're hard to explain in a review; you just have to see them for yourself. They were clearly an intentional choice on Baumbach's part, but I'm not exactly sure what he meant by them, or whether it actually worked. The jarring editing, scenes abruptly cut mid-sentence, took me out of the movie every time they happened. Halfway through the film, abrupt cuts then turned to fades to black after every scene, which was equally as jarring. There were times when the editing, the switching back and forth between different shots, confused me as to who was standing where or what was actually happening. A lot of this was purposefully done by Baumbach, but I don't think it was the right choice. All it did was confuse me and take me out of the movie. Adam Sandler's daughter, played by Grace Van Pattern, is a student filmmaker. We see a couple of her films in The Meyerowitz Stories, and they are some of the most out-of-the-blue, most f*cked up things I have ever seen in a film. They are a complete change in tone for the movie, they have no relation to the plot whatsoever, and the characters don't seem to react to it as normal adult human beings would if they were watching it in the real world. That especially took me out of the movie, as it was so radically sexual and really made no sense in the context of the film.

Overall, The Meyerowitz Stories is a deceiving film that makes you think it is very superficial and surface level, but actually is packed with a lot of emotion underneath it. The emotional depths of the film never rise to the surface, leaving you to speculate as to what has happened in these characters' pasts, and what made them the people they are when we see them in this movie. The focus of the film is family dysfunction, which is a truly relatable subject, thus making it easier to become immersed in the story. Adam Sandler turns in a really good performance, further cementing that he is beter at drama over comedy. Ben Stiller is also great, as is Dustin Hoffman. It was fun to see all three of them interacting with each other, as they all had great chemistry. The film does stumble with its editing. It makes some bold, purposeful choices that I don't think ultimately pay off as it were intended. It comes across as jumbled and confusing, rather than having some sort of artistic statement. Grace Van Pattern's character's student films also come completely out of left field, and their zaniness have no relevance to the story, nor do any of the characters react to it as real people would. It again was another purposeful decision that wasn't made clear, nor did it really pay off. In the end, despite its flaws, The Meyerowitz Stories (New and Selected) is a great film to watch, and definitely one to check out on Netflix. 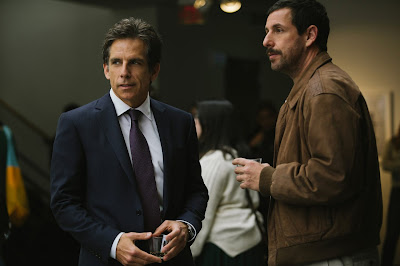 What do you think? Have you seen The Meyerowitz Stories (New and Selected)? Did you like the film? Leave your (spoiler-free) thoughts in the comments section below.