Woody Allen is an underrated director in my opinion. He has an incredibly impressive body of work, and has a very distinct style that more often than not clicks with me. There has been a lot of controversy concerning certain things he did in his personal life, and that has clouded people's views of his films. I try to separate the person from the art as much as I can (with certain exceptions, of course). But Allen is one of these people who I respect a lot from an artistic perspective, but don't exactly care for on a personal level. Last year, he put out Cafe Society, which I thought was a magnificent film. It was charming and elegant, packing hilarious comedy and emotional depth simultaneously. It was one of my favorites of 2016, and it was barely talked about, which I found to be an incredible disappointment. So ever since I heard that Allen had another film coming out this year, Wonder Wheel, I've been interested. What has held back from being truly excited has been that Justin Timberlake is the lead. I have yet to see him in a movie where I thought he gave a good performance. Every time he's on screen, I always feel like he's being shoehorned in there just because he's a famous face. However, we've seen many people grow as actors over time, and Timberlake has certainly been involved in movies for a while now. If anyone is going to pull a great performance out of him, it's Woody Allen. So on that basis alone, I've been tentative about this movie. But now, we have our first trailer for Wonder Wheel.

From what I saw in this trailer, it looks more like Kate Winslet will be more of the lead, and Timberlake will act secondarily to her. That makes a lot more sense, and that's a much smarter choice. Timberlake was decent in The Social Network, because he didn't have the weight of the entire movie on his shoulders. The films where he has turned in poor performances has been when he was the lead, because he's not a good enough actor to carry a film like that. However, with Winslet leading this movie, I think the chances of Timberlake turning in a good performance increases. One of my favorite things about Woody Allen is the dialogue he writes. As soon as you hear dialogue in one of his movies, you immediately know it's a Woody Allen film. And as soon as I started watching this trailer, I knew the dialogue was back. Allen is just such a witty writer, and I always look forward to hearing his dialogue. As long as Wonder Wheel has the look and feel (and sound) of a Woody Allen movie, then I'm on board with it. I didn't get too heavily immersed into the plot with this trailer. However, I think that is an issue that will subside once I watch the actual movie. I'm sure once I sit down and watch it in its entirety, I'll buy into the characters and the story far more than I would from watching a two minute trailer. Overall, I thought this was a solid trailer that reminded me that this film is coming out, and I can't wait to see what Woody Allen does with Wonder Wheel. 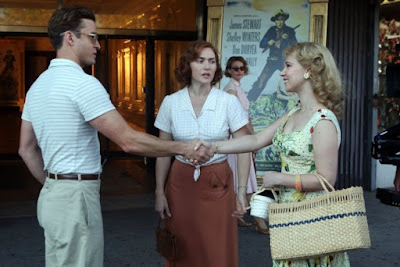 What do you think? Did you like the first trailer for Wonder Wheel? Are you looking forward to seeing the film? Leave your thoughts in the comments section below.