My anticipation for this film has been rather mixed. I was immediately struck by the all-star cast that director and star Kenneth Branagh had gathered. You have Johnny Depp, Penélope Cruz, Daisy Ridley, Josh Gad, Willem Dafoe, Judi Dench, and Michelle Pfeiffer. That is a winning team right there. Plus the idea of a murder mystery on a train, with those talents involved, sounded like it could make for something really cool. But the marketing hadn't sold me on it. I had seen a couple of trailers, and while they looked interesting, it hadn't shown me any reason why I should rush out to the theaters immediately to go see it. It felt like a rainy Sunday afternoon flick more so than a Fall-time blockbuster. In all honesty, I could have gone without seeing this movie. But I was invited to go, so I went along. And I ended up liking it a great deal more than I thought I would, though it definitely has its problems as a film.

While all aboard a train, a murder has taken place, leaving Hercule Poirot (Branagh) to try to solve who committed it. 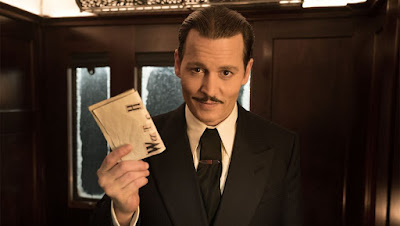 I thought the assembled cast is really good. Not everyone had that much to do, but there are some stand outs among the ensemble. I have never been a huge Josh Gad fan, but this is the first time where he proves himself to be a very competent actor. I was very taken by his performance. Willem Dafoe is also great. He doesn't have a ton of screen time, but there is a certain revelation regarding his character that required a great deal of finesse as a performer, and he pulls it off fantastically. I was also pleasantly surprised by Kenneth Branagh. When he first appeared on screen, I thought that he would quickly become tedious and annoying. However, as time went on, I found myself really getting into his character. Branagh plays him with such ridiculous eccentricity that he actually became rather charming and relatable. Now, it's not an Oscar worthy performance by any stretch of the imagination, but I do think it does say something about his ability as an actor to take these idiosyncrasies that normally would have annoyed me and in turn make them charming, as well as fulfilling his other duties as the director. The film is also very well shot. I was surprised by how much I was getting into the cinematography. Branagh works with long-time collaborator Haris Zambarloukos in order to make perfect use of the cramped quarters of the train. Whether its panning shots outside of the train looking in, or overhead shots looking down on the actors, Zambarloukos makes very distinct and interesting choices that allow for Murder on the Orient Express to come to life in a rather unique way, one that I wasn't expecting from the looks of the trailers.

While I was really engaged with the first two acts, the third act kind of falls apart. Branagh does a great job in building suspense and intrigue with the deepening mystery surrounding the murder, but the conclusion and resolution of the murder feels rushed, emotionally hallow, and inorganic. It just sort of happens, and it doesn't make any sort of logical sense within the context of the film. I know it's based off of a book, and this is how the story concludes in the book, but I don't think it works for this movie, and the way this story is told. I thought we were still in the second act, and then all of a sudden it begins to wrap up. It doesn't feel like the logical conclusion to the story that has been presented to us. So while Branagh does a really solid job in setting up the murder, introducing us to the characters, and getting us hooked on the mystery, he misses the mark when it comes to the conclusion, and give us a rather messy third act. There are also scenes that take place outside that have very clear green screens. I understand that Branagh might not have had the budget to give us authentic looking outside sequences, and if this was only for a few shots then I would have understood. But the characters keep making up reasons to leave the train for certain conversations, forcing us to witness these bad green screens. There is no need to go outside for these conversations, and these scenes could have been done just as effectively inside, where the layout of the train is so beautifully designed. For these scenes, the green screen became rather distracting, and takes away from the point of these conversations. 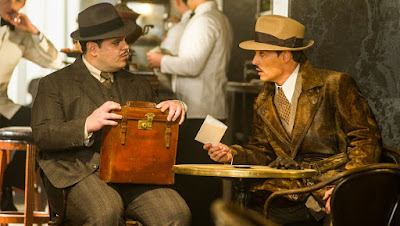 Overall, Murder on the Orient Express is a better film than I thought it would be. I was sucked into this world, and found myself surprisingly invested in Kenneth Branagh as Hercule Poirot. At first, I thought he would be incredibly annoying, but Branagh really works to make the character instead charming and entertaining. Josh Gad shows a side of him that I have not seen before, and Willem Dafoe is also really good. The cinematography, done by Haris Zambarloukos is surprisingly engaging, as he makes great use of the train setting through various tracking shots and overhead angles. For the first two acts, Branagh does a great job both performing and directing, and allowing the mystery of this murder to come about naturally. However, he botches it come the third act, as the resolution and climax of the film is rather messy. While it is the same ending as previously established in the book, it doesn't quite work for the movie Branagh has created here, and it feels shoe-horned in and unnatural. While I was really into the film for the first two acts, I left the theater with a somewhat sour taste in my mouth, due to an unsatisfying third act. In the end, Murder on the Orient Express is entertaining to watch, though it doesn't hold up as something one can watch over and over again. 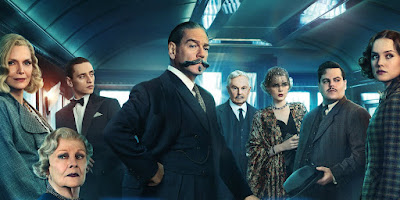 What do you think? Have you seen Murder on the Orient Express? If not, are you planning on seeing it? Leave your (spoiler-free) thoughts in the comments section below.