Ever since I first heard about The Post, I've been excited to see it. It's Steven Spielberg, teaming up with Tom Hanks and Meryl Streep to tell the true story of the Washington Post fighting against the government and the president to release incriminating documents. That sounds like a pretty great package to me! It's opening on Christmas, just making it eligible for the Academy Awards. Even before the trailer came out, I believed that this was going to be a major Oscar contender. You have two of the best actors working right now paired with one of the greatest directors of all time. How is that not a winning formula? And with us getting closer and closer to the Christmas season, I've been waiting to see a trailer for The Post. Since I'm sure it will have its foot in the Oscar race, I've been wanting to get a sense of how it will all come together. But for a smaller movie like this, it doesn't make sense to put out a trailer three or four months in advance; it just gets lost in the shuffle. But now is the sweet spot where they can have an effective marketing campaign to really get people excited to see this movie. And, sure enough, today we got our first trailer for The Post.

I liked this trailer. It's not the greatest trailer I've ever seen or anything like that, but it gave me a good sense of what we're getting ourselves in to with this movie. Meryl Streep barely did anything in this trailer, and I already know for a fact that she will be taking home the Oscar this year. That's how f*cking good she is! Tom Hanks looks great as well. I wasn't sold on his voice at first, but I think I'll grow into it once I'm sitting in the theater watching the film in its entirety. I love the timeliness of these events, and I think today's political climate will really help make this an even more effective and impactful film. While I do think this movie will end up being fantastic, and will be an Oscar contender, I didn't feel a lot of the emotional punch from this trailer that I wanted to. And that's fine; I'm sure a lot of the movie's power makes much more sense within the context of the film, and would be wasted being shown within a two minute trailer. But, while watching this trailer, I just didn't have that feeling of "Oh my God, I have to go see this movie!" I'm saying that more because of Tom Hanks, Meryl Streep, and Steven Spielberg. Look, this trailer was good, but it wasn't as great as I had wanted it to be. But I am still through-the-roof excited to go see The Post. I can't wait to see what Spielberg gives us! 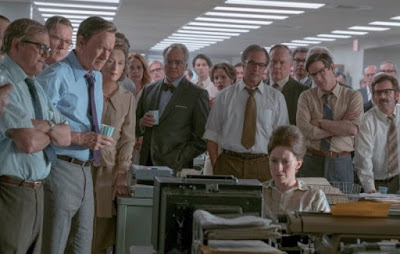 What do you think? Did you like the first trailer for The Post? Are you looking forward to seeing the film? Leave your thoughts in the comments section below.