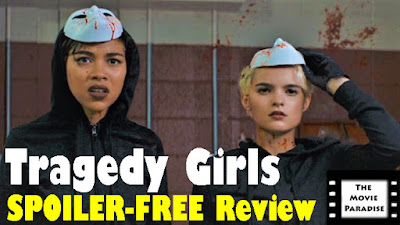 I had no prior knowledge of this film before I saw it. I had not heard of it before, nor had I ever seen a trailer. A friend suggested we go see it, and I subsequently looked it up. For a film with a cast such as this, I'm surprised that I had never heard of it. You have Deadpool's Brianna Hildebrand and X-Men: Apocalypse's Alexandra Shipp in the leading roles, with Craig Robinson, Kevin Durand, Jack Quaid, and Josh Hutcherson rounding out the supporting cast. For a film that's getting zero buzz, that's a pretty impressive line-up. So I went in rather curious. As I had heard no mention of it before, I knew I wasn't going to suddenly walk out and say it was on my top ten list of my favorite movies of the year. But with a 79% on Rotten Tomatoes, I figured I wouldn't be saying it's one of the worst movies I had ever seen either. So I went in not really knowing what to expect, and I was pleasantly surprised. Tragedy Girls isn't a great movie, but it delivers on enough fun and entertainment to keep you hooked and interested in seeing what happens next.

Two sadistic teenagers (Shipp and Hildebrand) living in a small town decide to go on a killing spree in order to promote their social media brand. 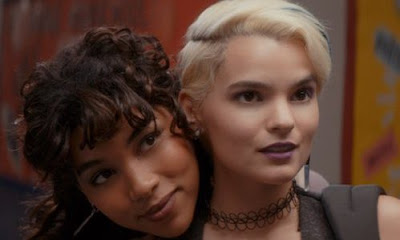 I can understand why there are some who would hate this movie. The film centers around two teenagers brutally butchering people in their town. When you read what happens in this film on paper, it's hard not to draw real-life comparisons to events such as Columbine. And while there is one part of this movie that did kind of cross the line, writer/director Tyler MacIntyre manages to strike an incredibly lighthearted tone. This allows for us to laugh with the movie during these extreme moments of horror. It's not meant to be a disturbing case file on deranged serial killers; rather, it's an entertaining play on old slasher movies where young teenage girls are usually the victims, but here they are now the killers themselves. It's an interesting twist, and it makes for a more compelling movie. Had MacIntyre not pulled off the tone in the way that he did, this film would have been entirely misinterpreted. Through his writing and his work with the actors, MacIntyre sets a mood for Tragedy Girls that makes it a truly entertaining time at the movies. The leading performances by Alexandra Shipp and Brianna Hildebrand are great. They have really fun chemistry, and they make for fun lead characters. There is not a ton of depth to their characters, but there is enough there that we can following along with them throughout the movie. Though actors like Josh Hutcherson, Kevin Durand, and Craig Robinson don't have a ton of screen time, they are really good for the time they are on screen, and fit in well with this world.

The movie keeps telling us over and over again that McKayla and Sadie are becoming famous due to their social media, but it doesn't do a great job of exactly explaining what it was they are doing online, and the global impact it apparently has. We know that they are exploiting the news, and they show us a couple clips of them doing so, but I can't tell you what it is they're really doing. It isn't explained as well as it should be. We also hear repeatedly that their number of followers are growing, but we aren't shown anything to suggest that it's growing outside of the school. This whole social media element of the film is integral to the story, but it isn't very well explained nor as fleshed out as it should be. I mentioned before that there is one event that happens that crossed the line. I was fine with all the other deaths in the film. They're played for laughs, and I was laughing along. But the final thing that happens at the end of the movie crosses the line for me. It isn't an individual death, but rather a collective one that feels far too realistic. Now, the movie could have then played this out to be the characters crossing a line themselves; a moral crisis they subsequently have to deal with. But after this event, it goes right back to normal for the characters. I just think MacIntyre takes it too far with this scene, and it left a bad taste in my mouth. 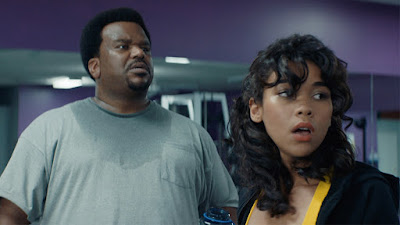 Overall, Tragedy Girls is a funny, entertaining time at the movies. It isn't a perfect film, but it manages to strike enough of a lighthearted tone to make it easily digestible. It's an interesting twist on the classic slasher film, and I like what they do with it. It also tries to be a commentary on social media, though it stumbles a bit here. It doesn't do as good of a job as it should in showing what the characters are using their social media for, and its widespread popularity. This should have been clarified further. Alexandra Shipp and Brianna Hildebrand are great as the leads. They show great range, and prove that they will be around in the industry for a while. The supporting cast, though they have minimal screen time, are effective in their roles. The ending event does cross the line for me, and feels a little too realistic comparative to the more Hollywoodized deaths in the rest of the movie. But, in the end, writer/director Tyler MacIntyre succeeds in finding the perfect tone to pull this movie off, and, at the end of the day, simply makes it an enjoyable time in the theater. 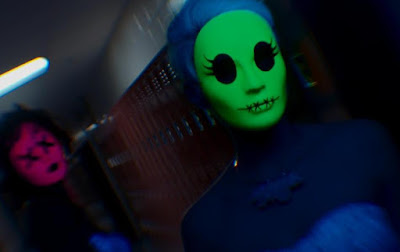 What do you think? Have you seen Tragedy Girls? If not, are you planning on seeing it? Leave your (spoiler-free) thoughts in the comments section below.