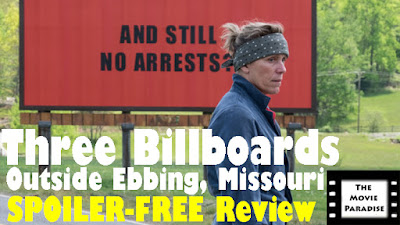 For a couple months now, I have been looking forward to seeing Three Billboards Outside Ebbing, Missouri. The trailers were incredible, promising an awards-caliber film. And from all the buzz surrounding the movie, it sounded like we would be getting just that. Writer/director Martin McDonagh has an all-star line-up, with Frances McDormand, Woody Harrelson, Sam Rockwell, Lucas Hedges, Peter Dinklage, Abbie Cornish, and Caleb Landry Jones. That, paired with a truly promising premise, made me excited for what I thought could be a pretty serious Oscar contender. And after seeing the film, I don't doubt that it will be in the running for a few awards. While Three Billboards Outside Ebbing, Missouri didn't end up being exactly what I thought it was going to be, it is still a really good movie worthy of being checked out.

After the rape and murder of her daughter, Mildred (McDormand) puts up three billboards calling out Chief Willoughby (Harrelson) for his inaction on the case. 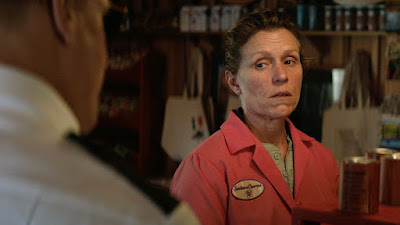 The performances in this film are all spectacular. Frances McDormand shines as Mildred. She's brash, rude, abrasive; but deep down you realize she has a softer side. The character's nuance is what makes her so engaging. McDormand captures all of the different dimensions and aspects of her character perfectly, and it makes for a truly compelling lead. Woody Harrelson is also great as Chief Willoughby. He comes across as one way at first, but then you realize he is a completely different person than you had originally believed him to be. This is part of a larger idea with Three Billboards Outside Ebbing, Missouri, one that I'll go into more detail on later. But the true star of this movie, for me, is Sam Rockwell. He gives one of the best performances I've seen from him in a while. I don't think it will happen, but right now I believe Rockwell to be deserving of a Best Supporting Actor nomination. His character is the backbone of the story, and is really what makes it as profound of a film as it is. I won't go into details on what they do with him, but I love the roller coaster of a direction they take the character. It gives the film a whole new layer of depth and dimension just in of itself. The film incorporates a lot of dark comedy, which some may be turned off by. But for me, it gives the movie a degree of levity that is necessary in helping to process the serious and dark nature of the story.

I mentioned before that this movie wasn't what I thought it was going to be. I went into the theater expecting something specific, and what I got was something else entirely. I could see how that might turn some people off from the film. But for me, it made for something fascinating to analyse. Martin McDonagh makes a point to play out the complete opposite of what you expect is going to happen. Since we've all seen movies before, there are certain expectations we have as to where different scenes are heading, where different characters are heading, and where the overall story is heading. When we start to see familiar scenes, we naturally piece together the rest of puzzle in our head. McDonagh purposefully structures the film to have us, the audience, make these certain conclusions, and then does the opposite of that. I'm watching a scene and I think I have it all figured out as to where it is all heading, and then it goes completely contrary to that. McDonagh plays with your expectations, and it makes for a movie that I cannot predict, and I love that. For an industry that constantly recycles old ideas, it is a fresh breath of air. However, it does lead to some issues. When you are expecting some sort of catharsis, you don't get it. McDonagh doesn't give it to you because that is what you are expecting to get, but you still ultimately want it. Doing the opposite of what is expected isn't always a good thing, and it leads to a few underwhelming moments in the film. But regardless, I applaud McDonagh's bravery in trying something so radically different than what was expected of this movie. 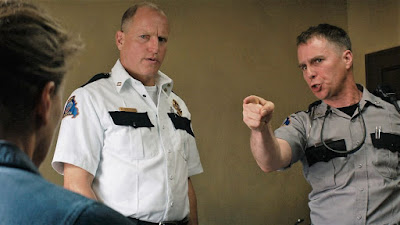 I love the premise of the movie, but it does get kind of lost within all of the subplots that pop up, as well as with how the story naturally evolves. It moves on from that central idea of a grieving mother trying to get justice for her dead daughter, and I wish the film hadn't lost sight of that. The movie is still really good and interesting, but it was that initial concept that first drew me in, and they deviate from it. The film also has some pacing issues. There are times when I am absolutely glued to the screen, and then other points when I'm looking around the theater. If this movie was about fifteen minutes shorter, it would be far more razor sharp in terms of its pacing, and it would have had my full attention for the entire run time. My biggest problem with the film, however, is the ending. It is very abrupt, and is an incredibly strange place to end the movie. Again, it's not the ending you were expecting, but this is an instance where McDonagh's deliberate storytelling choice fails. The movie ends, and it leaves a strange taste in your mouth. You really like the film you watched, but you leave the theater not ecstatic about it, but rather feeling put off by the ending. It was a wrong choice on McDonagh's end, and it is never a good idea to have your audience leaving the theater feeling underwhelmed, even if that feeling only really comes about from the final couple of minutes.

Overall, Three Billboards Outside Ebbing, Missouri is a really good movie that is very different from what I was expecting. Martin McDonagh continuously plays with the audience's expectations as to what is going to happen; sometimes it makes for a joyfully untethered and unpredictable film, while other times it makes for some underwhelming and off-putting moments. The performances are all fantastic. Frances McDormand shines in the leading role, delivering beautifully on the nuances of her character. Woody Harrelson also gives a great performance, but it is Sam Rockwell who is the stand-out of the movie. He is certainly worthy of an Oscar nomination, and I hope he gets one. The film does struggle with some pacing issues, and could have been about fifteen minutes shorter. It also has a very abrupt ending, one that didn't sit right with me after I left the theater. But, in the end, Three Billboards Outside Ebbing, Missouri is a strong enough, and unique enough, of a film to warrant it being seen. I think this movie will be up for a few awards this year, and it should been seen for that reason if for nothing else. 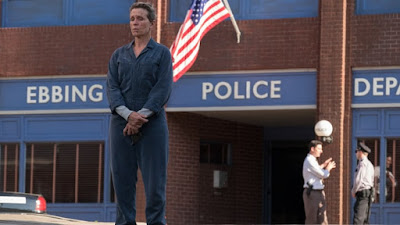 What do you think? Have you seen Three Billboards Outside Ebbing, Missouri? If not, are you planning on seeing it? Leave your (spoiler-free) thoughts in the comments section below.