All the Money in the World SPOILER-FREE Review 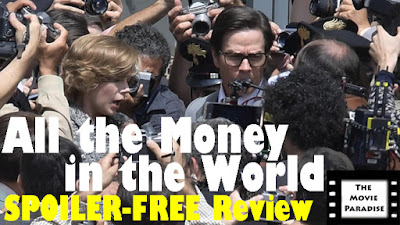 The buzz for All the Money in the World, Ridley Scott's second 2017 directorial effort (following Alien: Covenant), all began with the replacement of Kevin Spacey as J. Paul Getty. The film was done and in the can when the sexual assault allegations were brought against Spacey. With just two weeks until the film was planned to open, Scott announced that he would be reshooting Spacey's scenes and replacing him with Christopher Plummer. The most amazing aspect of the story, however, was that Scott still planned on keeping his December 22nd release date. You can read the full details on the story here. It was an unprecedented move, and one that made only me all the more intrigued to see the movie. In a strange but powerful way, the film became a defining part of Hollywood's all-important retaliation against sexual assault. The importance of replacing Spacey, and the statement it made, was not lost on Scott. And it certainly helped in marketing the film. But when you actually watch All the Money in the World, it's not supposed to be making any sort of profound statement. It's simply a thriller, and it should be seen only as that, as to not put any unfair expectations upon the movie.

When her son (Charlie Plummer) is kidnapped, Gail (Michelle Williams) must turn to her father-in-law, J. Paul Getty (Christopher Plummer), the richest man in the world, for help. 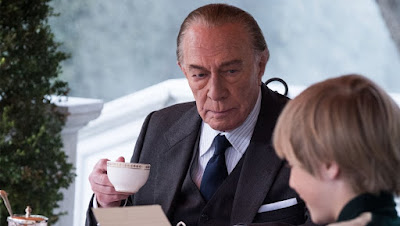 The strongest part of All the Money in the World is the performances. I'm not just saying this because of all the hoopla surrounding it, but Christopher Plummer turns in an incredible performance. He's heartwarming and disturbingly cold at the same time. You cannot overlook what an accomplishment this performance is on Plummer's part. He was brought in at the last second onto a project that he had had nothing to do with beforehand. He had to read the script, understand the character, and figure out the nuances of his performance all in a matter of days. The fact that he was able to bring as much dimension to the character as he did with as little time as he had to do it in is just mindblowing. And his last-minute integration into an already finished film is almost seamless. Minus one scene where he was obviously digitally inserted into the shot, the movie flows without any hiccups. It's an amazing feat on Ridley Scott's part, one that proves his dexterity as a director. But Christopher Plummer is easily the best part of this movie, and I have no doubt that he will garner himself a Best Supporting Actor nomination at the Academy Awards this year. Michelle Williams and Mark Wahlberg are also both really good in their roles, but Plummer magically acts circles around them, despite all of his scenes being reshoots. It's just incredible to watch. The film is also very well shot with beautiful cinematography, and expert costume and production design. Scott encapsulates the 1970's perfectly, and it makes it an all the more immersive experience.

While all the technical elements are stunning, and Christopher Plummer gives an excellent performance, the movie as a whole is a tiny bit bland. I was interested in what was happening, but I wasn't on the edge of my seat the entire time. The film never had my full, undivided attention. Now, a reason that may be the case is because I started watching it at 10:00 at night, and it's an almost two and a half hour long movie. So I fully recognize that that may have contributed to my not being full invested in what was happening. A lot of the movie is standing and talking, or walking and talking, or sitting and talking, and after a while I got bored with that. There are some excellent scenes that did have me on the edge of my seat. There are some sequences where my eyes were absolutely glued to the screen. But there are also a lot of points where I was looking around the theater, or slightly disinterested in what was happening on screen. A large part of this issue is All the Money in the World's runtime; the film is simply too long. At two hours and twelve minutes, there is a lot of screen time that feels like unnecessary filler. The movie honestly could have been an hour and forty minutes, and I think it would have flowed infinitely better. Ridley Scott has been known to have pacing issues, and has turned in overly long films in the past, and All the Money in the World unfortunately falls into the same trap. 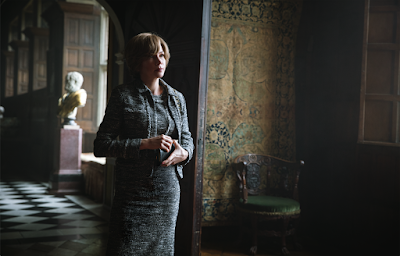 Overall, All the Money in the World is a really well made film that is bogged down by being too long. It has phenomenal performances, especially from Christopher Plummer. His accomplishments, paired with Ridley Scott's direction, makes for a marvelous and applaudable performance. Scott also does an excellent job capturing the aesthetic and viscerality of the 1970's, through the film's beautiful cinematography, and its superb costume and production design. However, the movie really is too long, and looses my interest quite a few times. There are definitely spectacular scenes, ones that absolutely had me locked in. But there's also many portions of the movie where I just didn't really care about what was happening. Had the movie been trimmed down significantly, I think it would have had a much stronger pace, and it could have been a nice, lean thriller. Instead, it has a whole bunch of filler that simply dilutes the final product. In the end, in terms of where All the Money in the World stacks up with Scott's other work, it's no The Martian, but it definitely doesn't sink to the depths of The Counselor either. The movie is certainly worth seeing for Christopher Plummer's performance, but it's not one that I would really care to watch again and again. 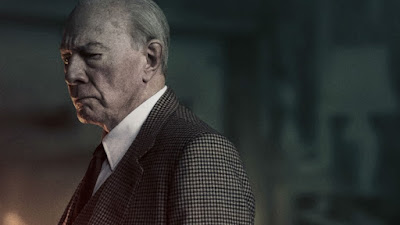 What do you think? Have you seen All the Money in the World? If not, are you planning on seeing it? Leave your (spoiler-free) thoughts in the comments section below.

Written by: Nathanael Molnár
Email us your movie questions at: themovieparadise999@gmail.com
Like us on Facebook, and Follow us on Twitter and Instagram @movieparadise99
2017 film all the money in the world charlie plummer christopher plummer mark wahlberg michelle williams nate ridley scott spoiler free review