First Trailer for Ant-Man and the Wasp

While I wouldn’t say it was one of my favorite Marvel movies ever, I found Ant-Man to be rather enjoyable. Paul Rudd was great in the leading role, and I really liked the world director Peyton Reed crafted around the character. The movie doesn’t reach the heights of say Captain America: Civil War or The Avengers, but Ant-Man is a fun little movie in its own right. With that, I’ve been looking forward to seeing Ant-Man and the Wasp. I think Evangeline Lily is a great actor, and I’ve been excited to see her suit up and kick ass with Rudd. And with the added talents of Laurence Fishburne, Michelle Pfeiffer, and Walton Goggins, it looked like Ant-Man and the Wasp had the potential to be just as good as its predecessor, if not even better! However, Black Panther and Avengers: Infinity War have somewhat overshadowed it. Those films are coming out sooner, and so it hasn’t made sense for Marvel this movie quite yet. That is, until now. Marvel has now released the first official trailer for Ant-Man and the Wasp.

I have been excited for this movie, but this trailer took my anticipation to a new level. It looks like it is going in a very different direction than the first one, with a much more action-driven style. And I think it will be for the better. Ant-Man can come across as being a ridiculous character, and the first movie couldn’t take itself too seriously so that the audience could get on board. But now that the masses have accepted Ant-Man, we can get a little more serious with the character and, from the looks of this trailer, that seems to be the direction they’re going in. The action choreography looks phenomenal. From the car chase stunts to the use of slow motion, the movie seems to have a very distinct style that we haven’t really seen from the Marvel Cinematic Universe before. The trailer also heightens Evangeline Lily’s expanded role, and we get to see her in action as the Wasp. I think she’s going to be just what this movie needs. We also get brief glimpses of Michael Douglas and Laurence Fishburne, and of a mysterious masked figure who not only do I think is the villain, but I also believe to be Walton Goggins. I have been reading some complaints online about the music choice, but I personally found it to only enhance the trailer. Overall, I was very impressed by this trailer, and my excitement for Ant-Man and the Wasp has shot up significantly. 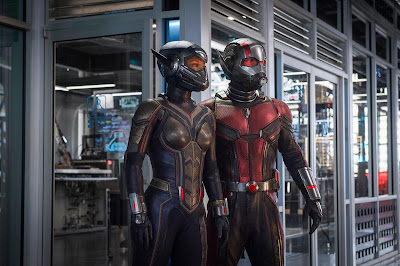 What do you think? Did you like the first trailer for Ant-Man and the Wasp? Are you looking forward to seeing the film? Leave your thoughts in the comments section below.