It is an understatement to say Dwayne Johnson is a busy man. Last year, he put out The Fate of the Furious, Baywatch, and Jumanji: Welcome to the Jungle, the latter of which I found to be the best. Looking ahead to this year, Johnson has two major action films hitting theaters: Rampage and Skyscraper. The former has already had a trailer, and is based upon the popular video game. You can watch the trailer for that film here. But we've heard virtually nothing about Skyscraper yet. I guess that makes sense; market one Dwayne Johnson movie at a time. But Skyscraper does hit theaters this summer which, believe it or not, is not too far off. We learned that the trailer would drop during the Super Bowl, which is usually a hot spot for movie marketing. However, only a TV spot was released (see it here), which served to hype up the later reveal of the full trailer on The Tonight Show Starring Jimmy Fallon. So now, we have our first trailer for Skyscraper.

I would say I liked the spot more, just because it was my first exposure to the film. But I do like this trailer a lot. It takes itself far more seriously than I was expecting it to, and I think that could end up being a great decision. Not every action movie these days has to be an action comedy. They don't all have to be filled to the brim with jokes. I'm sure Skyscraper will have a few one-liners like any good action movie, but it seems as if this movie is actually focusing more on developing the plot and fleshing out Dwayne Johnson's character. If that is the case, and they craft an intense action thriller that gives us a real story and compelling characters, then that could be what sets this movie apart from other action films that come out this year. Like I mentioned with the spot, I really like that Johnson is missing a leg. It gives the character a weakness, one that he has to overcome in order to save his family. It helps check him, and it keeps him from being a superhero, as Johnson can sometimes come across in his other films. But here, it seems like Johnson will play a vulnerable man who will have to deal with a lot more than just terrorists in order to rescue his family. Now, all of that is based on the assumption that this isn't just some dumb, ridiculous action movie, and it could very well be that. So I'm anxious to see what this film ends up turning out to be. 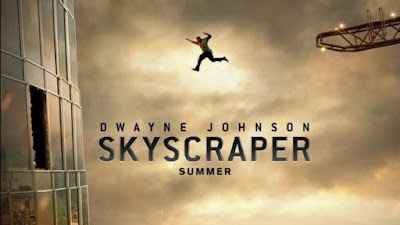 What do you think? Did you like the first trailer for Skyscraper? Are you planning on seeing the film? Leave your thoughts in the comments section below.