First Trailer for Fantastic Beasts: The Crimes of Grindelwald

While I've never been a huge fan of the Harry Potter franchise, I actually did quite enjoy 2016's Fantastic Beasts and Where to Find Them. I thought it was a fun adventure film, and I found myself really immersed in the world. All the creature designs were really well done, and while it isn't a movie I would watch again and again, I enjoyed myself watching it in the theater. But even with that sentiment towards the original, I haven't really had any interest in the sequel, Fantastic Beasts: The Crimes of Grindelwald. It seems like the story is deviating from the creatures, which is what I liked most about the original, and is focusing more on setting up Harry Potter. I didn't find Johnny Depp's character to be an intriguing villain in the first one, so it is kind of off-putting to see that he is the central focus of this movie. They've brought on Jude Law to play a younger Dumbledore, which could go either way. It could come across as a desperate attempt to milk the success of the Harry Potter franchise, or Law could portray a really charming, new side to this character. So, overall, I haven't been that interested in this movie. However, we now have our first trailer for Fantastic Beasts: The Crimes of Grindelwald, which opens in theaters on November 16th.

This was a fine trailer. It certainly wasn't bad, but it didn't do anything to make me actually interested in seeing this film. But then again, I didn't find the marketing for the first Fantastic Beasts to be all that great either, so I shouldn't really hold it against The Crimes of Grindelwald. This trailer reaffirmed what I already believed about this movie: it is straying away from the beasts and focusing more on the mythology. That makes sense for the sustainability of the franchise, which director David Yates has already said he wants to do five installments in. But the franchise-building was the part of the first one that I liked the least, and what I'm least interested in seeing with the sequel. We do get a few glimpses of some of the new creatures, which I do hope play a big role in the movie. They should be the central focus of these films, as this franchise is called Fantastic Beasts, not Harry Potter. In the end, I found this to be a merely adequate trailer. For big Harry Potter fans, I'm sure this trailer will hit them the right way. But for me, it doesn't really get me that excited for this film. I'll probably still go and see it, but I hope the beasts remain the focus of the movie, instead of it just trying to set up Harry Potter and dishing out fan service for two hours. 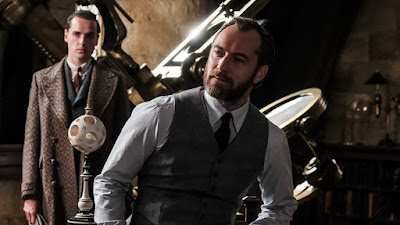 What do you think? Did you like the first trailer for Fantastic Beasts: The Crimes of Grindelwald? Are you planning on seeing the film? Leave your thoughts in the comments section below.