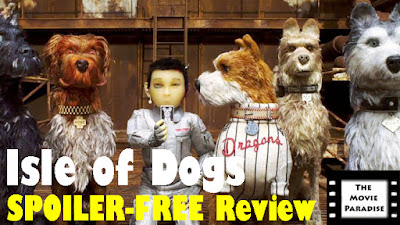 To be completely honest with you, I hadn't seen any Wes Anderson movies leading up to Isle of Dogs. So, in preparation, I watched The Grand Budapest Hotel and Fantastic Mr. Fox in order to get acclimated with his style. And I'm glad I did, because it certainly helped me appreciate Isle of Dogs more. The film looks at a futuristic Japan where, after a dog virus breaks out, Mayor Kobayashi (Kunichi Nomura) signs a law forcing infected dogs to be sent to a distant island to fend for themselves. There, we follow a pack of dogs led by Chief (Bryan Cranston) as they try to help a young boy named Atari (Koyu Rankin), who crash lands on the island, find his pet dog. Seeing Fantastic Mr. Fox beforehand (literally the night before) definitely helped, as it prepared me for Anderson's stop motion animation style. And I actually found myself liking Isle of Dogs even more so than Fantastic Mr. Fox. As a dog person, I really bought into the story and related to the characters. But it goes beyond that, as it is a very human story for a movie with dogs as the main characters. The narrative is a strong and powerful analogy for oppressed people and refugees, told with breathtakingly beautiful animation. Isle of Dogs is ultimately a creative and fun movie, while also touching at the same time. 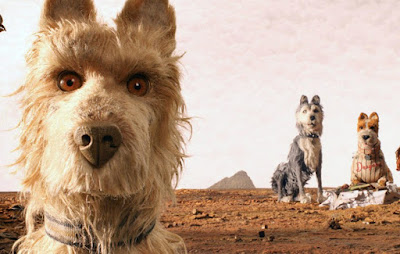 All of the dogs in the film have strong characterizations. The movie's lead, Chief, is a stray who has a hard time assimilating into a pack because he has only ever been on his own. The evolving relationship he has not just with the other dogs but also with Atari gives a lot of depth to his character, and makes him a lead in which you can rally behind. While the other dogs are not as central as Chief is, they also have strong characterizations that help them stand out. This is brought to life by wonderful talents such as Edward Norton, Jeff Goldblum, Bob Balaban, and Bill Murray. The dynamics of the pack are fun and entertaining, and supply a lot of the film's comedy. Isle of Dogs does not have as much comedy as say Fantastic Mr. Fox, but what comedy it does have really works well. I never felt as if they were trying too hard, or that the comedy was falling flat. And I think the sheer entertainment value of having all of these personalities collide on screen is what keeps Isle of Dogs going. I also relate to the movie because I'm a dog person. I don't think it's impossible to like the movie if you're not a dog person, but I do think being a dog person helps. As a dog person, you fundamentally understand the bond between dogs and humans, and that bond is a key emotional thread that carries on throughout the film. 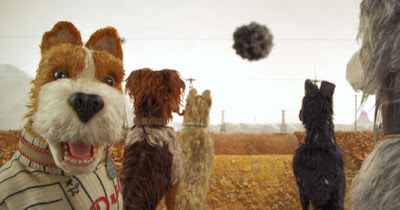 One could make the case that the movie is rather silly. You have talking dogs fighting a cat-loving mayor armed with robot canines, all while a rebellion forms to fight for dog rights. And when you look at it that bluntly, it is rather silly. However, the reason why it ultimately works is because it is a metaphor for oppressed social minorities. That's not to say that the film is calling these oppressed social minorities dogs, but rather Anderson is playing on this understanding we have about the personal connection dogs and humans share, and using that for his metaphor. In this sense, Isle of Dogs has a rather Holocaust-esque quality to it: members of society are being forcibly removed and being isolated by a hate-mongering elected official. Due to this, lines in the film such as, "Whatever happened to man's best friend?" become all the more impactful because of what they mean for how we treat other human beings. The sheer creativity on Anderson's part in crafting this metaphor makes me appreciate the film all the more. This additional layer of depth to the movie elevates Isle of Dogs from being a silly stop motion animation to being an intricate and effective social commentary, and that's the biggest thing I took away from this film. 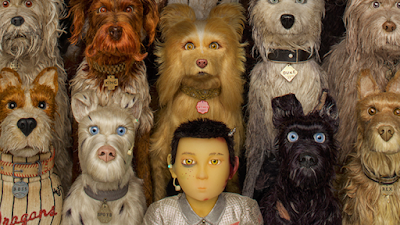 Overall, Isle of Dogs is a fun and creative film on Wes Anderson's part. It taps into this emotional connection people have with dogs, and uses it to sell the narrative's metaphor. The stop motion animation work is beautiful, and it tops what Anderson accomplishes with Fantastic Mr. Fox. The interplay and the back-and-forth between all the characters is the most entertaining part of the movie, and it's the fantastic actors voicing the roles that helps pull that off. The characterizations of all the dogs are incredibly distinct, allowing for them to individually stand out. But what elevates the film is its metaphor for oppressed social minorities. What Anderson does-- using pet dogs to convey the plight of the oppressed and the refugee-- is ingenious, and I applaud Anderson for pulling it off. In the end, Isle of Dogs works as being both entertainment and social commentary. Anderson accomplishes a great deal through the style of animation in which he decides to tell his story, and it enhances the film. Out of the limited Wes Anderson movies I have seen, Isle of Dogs is right now my favorite of his filmography. I look forward to exploring his movies further. If you are a fan of Wes Anderson, Isle of Dogs is one to see. Even if you haven't seen many (or any) of his films, like I hadn't, Isle of Dogs is still certainly worth checking out. 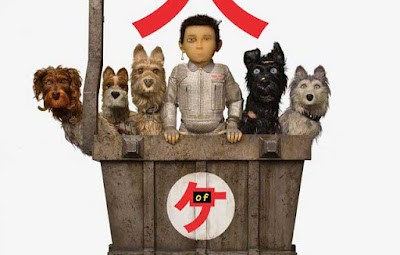 What do you think? Have you seen Isle of Dogs? If not, are you planning on seeing it? Leave your (spoiler-free) thoughts in the comments section below.