As much of a Star Wars fan as I am, I have not been that excited for Solo: A Star Wars Story. I wasn't interested in the idea of Disney doing a Han Solo origin film to begin with, and the whole director upheaval with Phil Lord and Chris Miller certainly didn't help ease my worries. Yes, Ron Howard is a great director, but I haven't been entirely sure that he would be able to salvage everything. At this point, I'm don't know if Solo will be a success for Disney. It seems like the whole production has been a mess, and the budget has gone through the roof. So a lot of importance was put on the first trailer in order to convince people that Solo will be worth their time, and I thought they blew it. The trailer wasn't awful or anything, but I found it to be subpar. And considering the fact that they needed to absolutely wow people in order to sell Solo, I thought it failed in that sense. But I've been waiting for a new trailer to hopefully get me excited for this movie. I don't think it's a foregone conclusion that it will suck. I think it has the potential to be awesome! But the marketing certainly hasn't done it any favors. And now we have the second trailer for Solo: A Star Wars Story, which opens in theaters on May 25.

This is the best piece of marketing they've put out for the movie, but it still isn't great. This is a good trailer. It gives us a sense of the story, it introduces us to the characters, and it gives us a look at the scope of the action. But this didn't knock my socks off, make me fall out of my chair, and scream, "Holy shit! Why did I ever doubt this movie?! This is going to be fucking incredible!!" It's the best trailer they've released thus far, but it's only a good trailer. I'm still not sold on Alden Ehrenreich as Han Solo. He's a great actor, but he's never felt like Han Solo to me in these trailers. He just comes across as a guy reading lines Han would say. When we're actually watching the movie, it could be completely different. These snippets of him from the trailers may not do him justice, and I fully recognize that. But all I have to go by right now are the trailers, and they have not sold me on Ehrenreich as the lead. Even if the movie is a complete bag of shit, at least Donald Glover will be phenomenal as Lando Calrissian. He looks absolutely perfect for this role, and I think he's going to steal the show. At this point, I'm going to just see the movie and judge it for what it is. I don't have the highest of hopes, but I really want Solo: A Star Wars Story to surprise me. I hope it's awesome! I just don't think it will be. But we don't have too much longer until we find out. 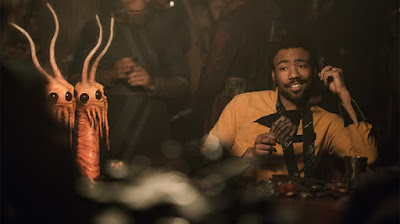 What do you think? Did you like the second trailer for Solo: A Star Wars Story? Are you planning on seeing the film? Leave your thoughts in the comments section below.