Venom has been a roller coaster of expectations for me. When Sony first announced they were doing a Venom movie, I wasn't that interested. However, then they brought on a stellar cast including Tom Hardy, Michelle Williams, Riz Ahmed, Woody Harrelson, and Jenny Slate. With that, my anticipation for Venom began to grow rapidly. It ended up becoming my fourth most anticipated movie of 2018, and I was expecting that the film would ultimately take everyone by surprise and be fantastic. But then the first trailer dropped, and I hated it. The entire trailer was building up to Venom, and there wasn't any Venom in it! I don't know how a Venom trailer without any Venom got past Sony and was put online, but that's what happened. After that trailer, my faith in the movie was majorly shaken. It's to the point where I think whether or not Venom will be any good is a coin toss. I've been looking forward to seeing a new trailer. Hopefully, Sony can get me back on board, and all they have to do is show Venom. Do give us a compelling story in the trailer, but show us Venom-- and what he looks like-- and you will immediately have my attention. And Sony did just that at CinemaCon this year by releasing the latest trailer for Venom, which opens in theaters on October 5.

I am not completely back on board, but I'm thinking of Venom in a more positive light now. First and foremost, Venom looks awesome. It's a great design, and the clip they use of him at the end of the trailer was the perfect way to introduce him to us. I wish it was in the last trailer instead, but oh well. Having Venom and getting our first look at him is definitely a win. As for the rest of the trailer, I liked it but didn't love it. Tom Hardy looks great in the role, and I'm sure he will shine on screen. Even if Venom turns out to be a bag of shit, Tom Hardy will make it bearable to watch. The story of Hardy transforming into Venom is pretty obvious and paint-by-the-numbers. It's exactly what I was expecting it to be. Now, maybe the beats are ordinary but the actual events are refreshing, which is what I hope the case is. It's hard to tell what the case is from this trailer, though. I'm not a fan of the voice that talks to Eddie. It sounds kind of cheesy, and I could see it going south fast in the film. Then again, director Ruben Fleischer could make it work and be effective, so it's all about how they use it. My biggest fear with Venom is that the whole movie will be building up to only ten or so minutes of actual, fully-formed Venom at the end of the film. And none of the trailers have alleviated this fear. I could see the layout of this trailer being the layout of the actual movie: Eddie has moments of using some of the symbiote throughout the whole movie, but doesn't fully become Venom until the very end. I really hope that isn't the case. I really hope we get Venom by the second act, and he's in a good amount of his own movie. But I wouldn't put it past Sony to only tease Venom for the entirety of the film. We'll have to wait and see what ends up happening. 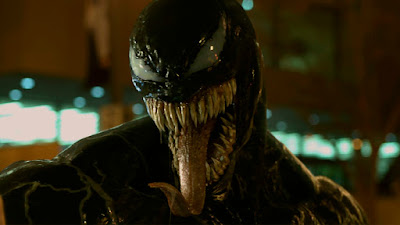 What do you think? Did you like the second trailer for Venom? Are you planning on seeing the film? Leave your thoughts in the comments section below.