Spike Lee's new film BlacKkKlansman is a movie that I have been looking forward to ever since I first heard it announced. Produced by Get Out's Jordan Peele, the film follows a black cop (John David Washington) who uses a white surrogate (Adam Driver) to help him infiltrate the Klu Klux Klan. It's based on a true story, and it sounds absolutely fascinating. And the pairing of Jordan Peele with Spike Lee makes for a dream team. They have both proven themselves to be able to tell compelling and unique stories about race, and I think a story like this really plays to their strengths. I have had incredibly high hopes for this movie since the beginning. Though, I'm not crazy about the title. I preferred it back when it was just "Black Klansman". Putting "KKK" into the title just looks stupid, and I wish they hadn't done that. But it's just the title, and it doesn't mean anything for the actual movie. I have been really looking forward to seeing a trailer for this film in order to finally get a sense of what it will be like. And now we have our first trailer for BlacKkKlansman, which opens in theaters on August 10.

I really liked this trailer a lot. It immediately establishes the atmosphere and the tone of the film right off the bat. It is certainly a drama, but it is leaving itself room to have fun and be lighthearted, and I think that is incredibly important. Nazism and the Klan are hot-button topics right now, and is the center of a lot of tragedy and pain in our current political climate. You need to be able to have fun with this, or else it runs the risk of alienating people. And that's why Spike Lee is such a perfect fit for this project. He can handle the gravity of the situation while also interjecting some fun into it. And traversing drama and comedy in regards to a racially driven story is what Jordan Peele just did with Get Out, so they really are the dream team when it comes to making BlacKkKlansman. I also love all the production and costume design. They are going all-in on making this feel like the 70's, and it really helps with crafting the film's atmosphere. Overall, I cannot wait for this movie. They have an excellent team behind the camera. They have incredible talent in front of it. The premise sounds intriguing. The trailer promises a fun, compelling film that targets racism in a very direct way. With all of that combined, I can't wait to see this movie. 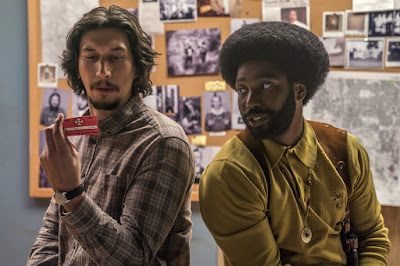 What do you think? Did you like the first trailer for BlacKkKlansman? Are you planning on seeing the film? Leave your thoughts in the comments section below.