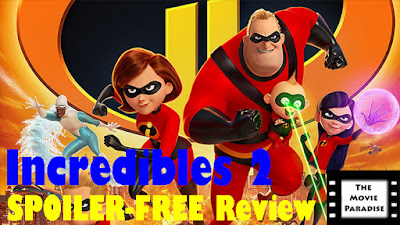 The original Incredibles movie is an all-time classic. It came out in an era when we weren't overly inundated with comic book and superhero movies and, in that sense, it was rather unique. For a kids movie, it was rather adult. It dealt with very mature themes and complex issues, and I think it's that level of sophistication that made The Incredibles what it was. Of course, that's what you get with writer/director Brad Bird. With both The Incredibles and The Iron Giant, Bird makes animated movies that are accessible to kids, but not made exclusively for kids. Bird has really shown that you can make films that kids can watch and enjoy, but they are multilayered and complex with compelling characters and mature themes that will go right over kids' heads. But while The Incredibles was a giant smash success, it has taken fourteen years for a sequel to come out. Why? Bird has said that he didn't want to rush right into a sequel; he only wanted to make another movie if he thought it could rival the original, and that's a sentiment I wish more filmmakers had. Instead of doing another one for the sake of doing another, do it only if you're passionate about it... even if it takes fourteen years. Well, we now have Incredibles 2 and is it as good as the first one? I don't think so. Incredibles 2 is entertaining and funny, but it's missing the emotional hook and the narrative maturity the first film has in spades. 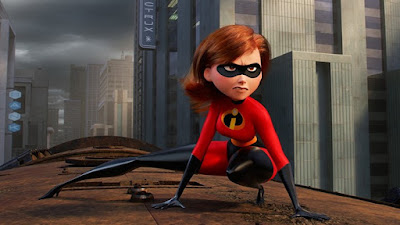 If I harp on the negatives, don't interpret it as me not liking the movie. I like it a lot, but I think there's more to talk about with its weaknesses than its strengths. The animation quality is breathtaking. While great for 2004, the animation in The Incredibles doesn't exactly hold up. Maybe in fourteen years we'll be saying that Incredibles 2 doesn't hold up either, but for today's standards it looks fantastic. The action sequences are all well choreographed, which is strange to say for an animated movie, but it's true. They feel visceral and real, and it feels like big, bombastic, superhero action. That somewhat ties into a negative I have about the film, but I'll get to that later. Brad Bird gives his animated movies a cinematic feel. From the cinematography to the lighting to Michael Giacchino's beautiful score, the effort put into film's technical aspects feel up to par with live action movies. That is the sign of a great director. It doesn't matter if they are directing a live action film or an animated movie, they approach them both in the same way and treat them with the same amount of respect. It also feels nice to be reunited with these characters. We went through so much with them in the first movie, and seeing them again in Incredibles 2 feels like getting back together with old friends. The story Brad Bird tells with the sequel is really interesting. In an attempt to legalize supers, Elastigirl (Holly Hunter) wears a camera while going about her missions to show the world the good superheroes can do. It has a tinge of social relevance, and I think it was a great direction to take the sequel in. 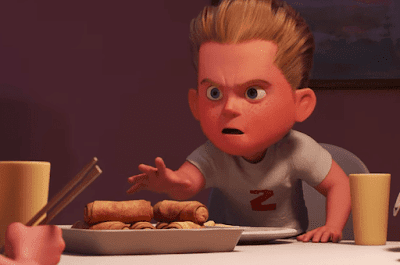 My biggest problem with Incredibles 2 is that it doesn't feel unique. The original was unique in its complexity. The characters struggled with deep, philosophical, moral dilemmas. The villain was a representation of Bob Parr's (Craig T. Nelson) shortcomings. There was a sophistication to it. Incredibles 2 doesn't have that. There are moments where the characters struggle, but it's not nearly of the same level of depth as the first film. Incredibles 2 feels more like a Saturday morning cartoon, with big action sequences and lots of laughs. While it's all very entertaining, it doesn't stand out. It's a surface level movie, and while I was definitely entertained and amused sitting in the theater, I didn't walk away thinking about anything. It didn't stick with me in the same way the first one did. Incredibles 2 became simply one of the many comic book movies that come out every year, instead of standing on its own as something truly special and unique. There are great parts to this movie. I love everything with Bob trying to take care of the kids. I really like the Bob Odenkirk character. But it all feels kind of shallow compared to how sophisticated of a film the first one is. The best way to say it is that Incredibles 2 never took itself to the next level; it just stayed as one-note movie. It was a fun experience, and I enjoyed myself watching this movie. But it's not going to grip a generation like the first film did. It's not something that people will leave the theater thinking about. It's kind of a fluffy film. Now, I wasn't expecting Citizen Kane, but when you wait fourteen years for a sequel and you know the reason we haven't gotten a sequel is because the director didn't want to make another one unless he thought it could be as good as the first one, you want something a little more rich than what Incredibles 2 delivers on. 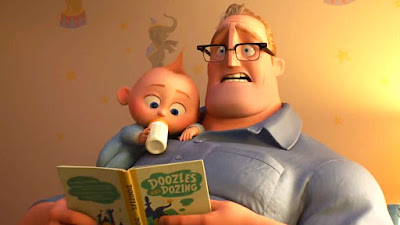 Overall, Incredibles 2 is fun and entertaining. It has a lot of good laughs, and it's a nice movie to take your family too. It doesn't push many boundaries, it's not overly complex, and it's pretty accessible to kids. But I can't help but yearn for the complexity and sophistication of the original film. Incredibles 2 is a fun superhero movie, but when a new tent pole superhero movie comes out every couple months, Incredibles 2 doesn't really stand out from the crowd. The animation quality is beautiful. The technical aspects are of a live action movie's standards. The story is really interesting, and all the parts with Bob Parr trying to take care of the kids is really good. But it feels like something is missing from the sequel: an extra level of depth. Something to make it feel like an Incredibles movie and not just another big comic book movie. Don't get me wrong: I love comic book movies. But The Incredibles was always its own thing, and Incredibles 2 just doesn't have that same uniqueness or special quality. In the end, Incredibles 2 is a good movie and is really fun. It's definitely worth checking out. However, if you're looking for the same kind of complexity the first film has, you're not going to find it. Incredibles 2 is more cookie cutter than its predecessor, which is somewhat disappointing after a fourteen year long wait. But there is definitely fun to be had with Incredibles 2, and for that it's worth checking out! 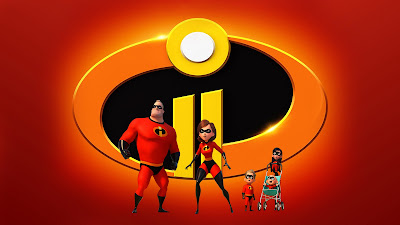 What do you think? Have you seen Incredibles 2? If not, are you planning on seeing it? Leave your (spoiler-free) thoughts in the comments section below.