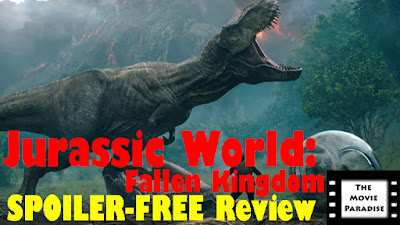 Life, uh, finds a way... for the fifth time. Jurassic World: Fallen Kingdom is the fifth installment in the Jurassic franchise, and I know many people see the continuation of this series as unnecessary. I liked Jurassic World more than most. I thought the realization of what a real life Jurassic World would look like was just incredible. I found Chris Pratt to be an excellent lead, and I thought it was a fun adventure. It doesn't touch the original Jurassic Park, but I really liked it for what it was. So I've been really interested in Jurassic World: Fallen Kingdom. This one is directed by J.A. Bayona, who I thought did a fantastic job with 2016's A Monster Calls. He proved himself to be an incredibly imaginative director, and I've been fascinated to see what he would bring to Fallen Kingdom. However, the trailers for this film have not really impressed me. Of course, the trailers for Jurassic World didn't really do it for me either, and I ended up really liking that one. So, trailers aside, I've been looking forward to Jurassic World: Fallen Kingdom, and I wasn't disappointed. I'm surprised by how much I actually like this one. It's an intense adrenaline rush and, while it doesn't come close to Jurassic Park, it cements what this franchise is now. Some may hate it, some may love it, but for me personally, I really like the direction these films are going in. 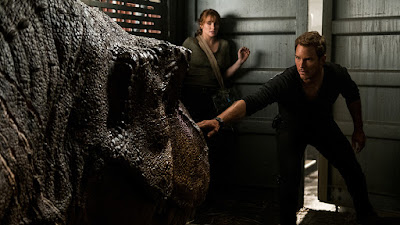 From the opening scene, the tone of the film is established. One of my critiques of Jurassic World is that it never really showcased the terror of the situation. It had the action and adventure aspect of Jurassic Park, but the horror was missing. Jurassic Park balanced those two elements seamlessly. With Fallen Kingdom, Bayona really capitalizes on the horror. Back is the blend of adventure and terror and, while it's not done as well as with the original movie, it is satisfying to watch. In Fallen Kingdom, Isla Nebular is rigged to blow, and the world struggles with whether to let the dinosaurs die, or to relocate them in order to save them. Do dinosaurs have the same rights as other living species of animals? That is the question at the heart of this film, and I think it's a great direction to take the movie. Even in its fifth installment, these movies still have pressing philosophical quandaries at their centers, and it only enhances the blockbuster fun. Jeff Goldblum returns as Ian Malcolm to definitively say that the dinosaurs should be left to die, as it is nature's way of re-correcting our mistake. But Claire (Bryce Dallas Howard) and Owen (Pratt) don't agree with this philosophy, and try to save the dinosaurs. However, it ultimately goes wrong when a greedy corporate stooge gets involved. I'm happy that this one didn't take place in a park again. At this point, they've exhausted that idea, and glad to see the story progress beyond it. And I think Fallen Kingdom is a better film for it. 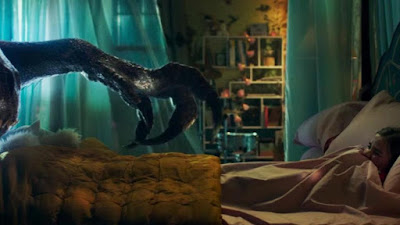 Fallen Kingdom's biggest problem isn't even the movie's fault: all of the main story beats were shown in the trailers. Narratively, there aren't many surprises because the trailer spoon-fed us the entire story. I still greatly enjoyed myself watching this film, but I couldn't help but be annoyed that I constantly knew where it was heading at all times. Again, I can't really blame the movie for this. This is solely the fault of the marketing team. Pretty much every single line Jeff Goldblum has in the movie is in the trailers. Even some of the final shots of the film are in the marketing, and they're giving away a great deal! It always frustrates me when this happens, because it takes something away from the movie theater experience. That is my single biggest issue with Fallen Kingdom, though there are little annoyances along the way. I really did not like Justice Smith's character. I have to wonder how anyone thought having his character in the movie was a good idea. It's borderline excruciating. Now, it didn't ruin the movie for me or anything like that, but it just makes me wonder why? There is also a revelation with a certain character near the end of the film which makes sense within the context of this world, but feels unnecessarily thrown into the movie. Fallen Kingdom sets itself up for a third film, which we know will be coming in 2021 with Jurassic World helmer Colin Trevorrow returning to direct. The set up seems like the next natural stage of this trilogy's story, but the way it happens in Fallen Kingdom is puzzling. It just doesn't seem logical that it would happen in the way that it did. 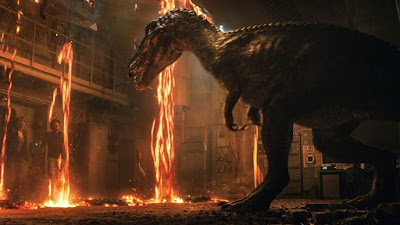 Overall, Jurassic World: Fallen Kingdom is action-packed, intense, and a lot of fun. I was on the edge of my seat for a lot of this movie, and I really enjoyed myself. J.A. Bayona brings back the terror that was missing from Jurassic World, and he nails it. There are so many great shots and moments in this film, and it's incredibly well directed. I'm surprised by how good the cinematography is in this movie. Bayona really knows how to use the camera to capitalize on the horror, and it makes for some really effective moments. I like the moral dilemma at the heart of this film, and it helps keep the franchise feeling fresh five movies in. My biggest problem is that most of the story beats were shown in the trailers, which takes away the element of surprise. I knew exactly where the movie was going because of the trailers, and it really frustrates me. There are also some little issues here and there that bothered me, such as Justice Smith's character and a few decisions characters make over the course of the film. But Jurassic World: Fallen Kingdom is ultimately a really fun movie, and it's one I think a lot of people will like. If you liked Jurassic World, you will probably like Fallen Kingdom. But if you didn't like Jurassic World, and you don't like the direction the franchise is going in, then Fallen Kingdom most likely isn't for you. 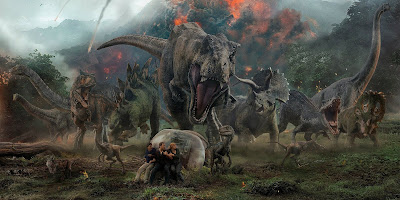 What do you think? Have you seen Jurassic World: Fallen Kingdom? If not, are you planning on seeing it? Leave your (spoiler-free) thoughts in the comments section below.