Ever since we saw the twist ending of Split, revealing it to actually be part of the world M. Night Shyamalan previously created with Unbreakable, we have all been patiently waiting for Glass. The third film would connect the two previous movies, with Bruce Willis, Samuel L. Jackson, James McAvoy, and Anya Taylor-Joy all returning. This is a movie that I have been dying to see. Split was the first Shyamalan film that I've liked pretty much since Unbreakable, and his twist ending was genius. It only worked because of how good of a standalone story Split is, and revealing it to be tied into Unbreakable is like the cherry on top; it makes it even more rich. But with Glass, Shyamalan has a lot on his shoulders. He is tying in two of his most popular movies together, and a lot rides on this. I wasn't a particularity big fan of The Visit, but that was the first movie Shyamalan did that everyone didn't hate. And then he had massive success with Split. So Glass is the third film of the new chapter in his career and, if he can knock it out of the park, then I think M. Night Shyamalan is officially back in business. And now we have our first trailer for Glass, which debuted at this year's San Diego Comic Con. The movie opens in theaters on January 18.

This trailer mainly builds the atmosphere. It puts all of the pieces in place so that we can see where it's all heading. What's great is that I don't feel like I know the whole story. I know elements, but I don't know the actual plot of the film, and that's refreshing to see with a movie trailer. Bruce Willis, Samuel L. Jackson, and James McAvoy all look excellent. It looks like Willis actually gives a shit about this movie, which would be a nice change of pace for him. I hope, under Shyamalan's direction, that we will finally get a great performance out of Willis again, as it has been awhile. McAvoy looks like he never stopped filming Split. He's right back where he was two years ago, and he is going to crush it once again. And it is so great to see Jackson back as Mr. Glass. His performance in Unbreakable is incredible, and I'm excited to see him return to the character. Obviously, with the film being titled Glass, a large portion of it is going to revolve around him, and I think that makes for a really interesting narrative. I just hope it sticks to its roots and it doesn't try to cash in on the superhero craze. My one fear is that Shyamalan is trying to get into the superhero game with this movie and is making his Avengers, which is not what Glass should be. The trailer looks like it's staying consistent with the tone of the first two films, but it doesn't completely alleviate my fears. Overall, I really like this first trailer for Glass, and I can't wait to see the movie. 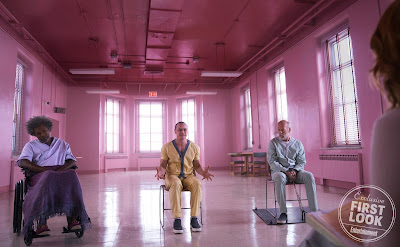 What do you think? Did you like the first trailer for Glass? Are you planning on seeing the film? Leave your thoughts in the comments section below.