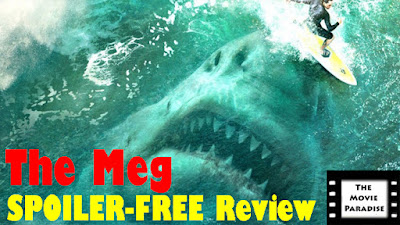 Ever since Jaws came out in 1975, the movie-going audience has had a fascination with sharks. Every time a shark movie comes out, it seems like people flock to go see it. I don't know if people are collectively hoping each film will be as good as Jaws, or if people are just drawn to sharks, but there seems to be worldwide anticipation every time a new shark movie is coming out. Nowadays, there are really only two kinds of shark movies that are made. You have the serious thrillers like The Shallows, and then you have the absurdly ridiculous ones such as the Sharknado films. And when the trailers for The Meg came out, a lot of people thought it would be almost in the vein of a Sharknado movie. I personally thought it looked more like it was going to be just plain dumb instead of being dumb fun, but I know a lot of anticipation surrounded this film. So I went and saw it, and I didn't like it but I also didn't hate it. The problem with The Meg is that it doesn't know which of these two types of shark movies it wants to be. Sometimes it wants to just be big zany fun, and then sometimes it tries to be uber serious with narrative building and character development. The Meg has a real identity crisis, and it would have been for the better if it had just picked one and stuck with it. 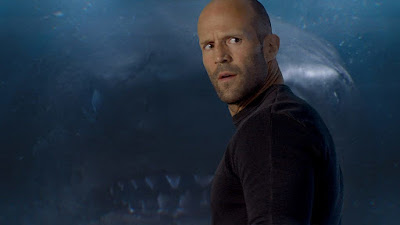 When it comes to big stupid shark movies, what are you looking for? You want to just have fun. You aren't really looking for fleshed out characters. You aren't looking for a strong and compelling narrative. All you want is for a big shark to eat a bunch of people, and you just want to have fun. With The Meg, there is fun to be had. Whenever the characters are in the water fending off the shark, the film builds a decent amount of tension. These are the parts of the movie where I was actually getting into it and starting to have fun. And if The Meg had simply forgotten all the other baggage and just focused on these parts--which is what people came to the movie to see--then it would have been a fantastic movie theater experience. But The Meg finds it necessary to try to develop its one-note characters. "Develop" is a strong word, because character development doesn't come just from two characters having a conversation, which is all that happens in this film. Characters talk to each other, and we're supposed to then suddenly care about them because they can speak words. We're not rooting for you! We're rooting for the big ass shark to eat you! The Meg is about 30% shark, 70% boring characters having boring conversations. Look, you have to give them credit for at least trying to build their characters and their story, but it's wasted on a movie like this. The Meg doesn't need to have any of that. If they had just embraced the ridiculousness and had given us just stupid shark fun, then people would have gone nuts for this movie. It doesn't need to be serious or grounded and, while I can appreciate the effort, it is utterly wasted on a movie like The Meg and it only takes time away from what people really came out to the movie theater to see. 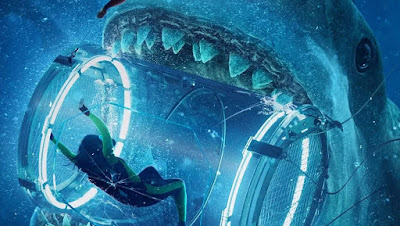 While I've been bagging on this movie thus far, it does certain things better than I thought it would. Usually a lot of the characters in movies like this are absolutely unbearable to watch on screen, and that's not the case here. The characters are certainly boring, but they're not really annoying. From the trailers, I thought Rainn Wilson was going to be the excruciating comic relief who you just want to smack across the face, but he isn't that. I didn't really find him that funny, but I actually didn't mind him. A lot of the side characters who had the potential to be absolutely horrendous are pretty tolerable. That doesn't change the fact that their dialogue is utterly horrendous, but no one annoys me like I thought they would. It's weird to think that the big praise for a movie is that it isn't as bad as it could have been, but for something like The Meg, that is high praise. So, overall, the movie doesn't take the step to becoming something that is hard to watch, like 47 Meters Down. Rather, it's just filled with unnecessary, boring character and narrative building, and it never really embraces what it is people wanted it to be. The Meg does have points where it is fun, especially starting around the third act, but it's diluted by all of these other scenes that try to do serious character development. It has a sort of identity crisis, and it doesn't know whether to be The Shallows or Sharknado, and it loses a lot of people as it switches back and forth between the two. If you thought The Meg was going to be the next super fun shark movie, I think you're going to be disappointed. But there is fun to be had with some of its sequences; it just makes you wish the entire film had embraced what these few scenes give you. 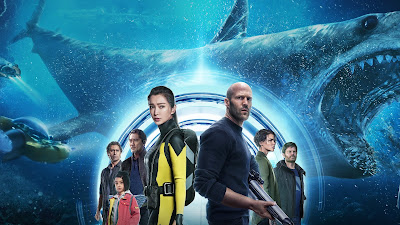 What do you think? Have you seen The Meg? If not, are you planning on seeing it? Leave your (spoiler-free) thoughts in the comments section below.