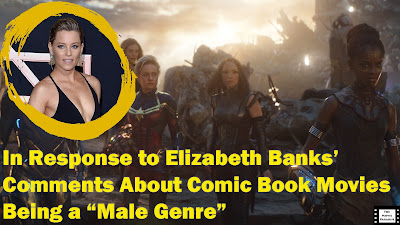 In the last nineteen years, comic book movies have slowly but surely come into their own as the dominant movie genre in Hollywood today. Looking at the comic book movies of the early 2000s (X-Men, Spider-Man, Catwoman to name a few), a distinct evolution is apparent when compared to the comic book movies of today (Captain Marvel, Avengers: Endgame, Joker). These nineteen years have shown us that comic book movies can balance the grand action spectacle with deep character development and compelling narratives; that comic book movies can have emotional maturity; that comic book movies can transcend the confines of their genre that many film critics, film fans, and filmmakers initially pigeonholed it into. Not only have the quality of movies grown, but so have the films' box office appeal. From modest beginnings of a $296 million worldwide debut for 2000's X-Men, we have now seen comic book movies lead the charge in box office records. This year's Avengers: Endgame surpassed Avatar as the highest grossing movie of all time with a mind-boggling $2.79 billion. Captain Marvel joined the billion dollar club ($1.12), as did Spider-Man: Far From Home ($1.13) and (surprisingly) Joker ($1.01). The point being that comic book movies have had a long period of growth and evolution where their structural DNA as a genre has developed and their box office appeal have shot through the roof. It is a genre that is in a constant state of redefinition, and defining it entirely as one thing is shortsighted, as even if it is true it would quickly be made antiquated. 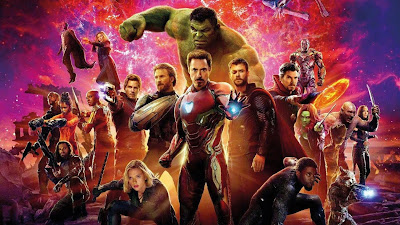 Martin Scorsese recently fell into this trap, summing comic book movies in their entirety as "theme park rides" and refrained from calling them "cinema". While not entirely wrong in his sentiments, the basic concept of defining an entire genre made by a diverse group of studios and filmmakers--based upon a diverse amount of subject matter--speaks to a basic lack of understanding about the genre. While one certainly does not have to like comic book movies, anyone who has seen comic book movies would have to admit the differences between James Gunn's wacky space fantasy/comedy Guardians of the Galaxy and Christopher Nolan's gritty real-world The Dark Knight Trilogy. Todd Phillips' nihilistic social commentary Joker bares no resemblance to Patty Jenkins' World War I adventure piece Wonder Woman, despite both being produced by the same studio and being based upon (relatively) the same DC comic books. While almost all of them deal with similar concepts of ultra-heroism and the fantastical, these movies are just as different as any other two movies in any other genre. Lethal Weapon and Beverly Hills Cop as police movies probably share more in common with each other than The Amazing Spider-Man 2 and Man of Steel do, though they both have practically nothing in common with Zodiac. Genres are labels we attach to films that operate within a certain wheelhouse, though that wheelhouse is not the entirety of what that movie can be. In short, movies of any genre are different, and classifying every movie that belongs to a certain genre as one thing is ultimately ignorant.

I covered very little of Scorsese's comments on the genre because much of it related to his own personal opinion. Individuals are allowed to have their own opinions, and an opinion isn't overly newsworthy. I only really objected to his comments when he began to categorize comic book movies as "invaders" and insinuated they should not be shown in theaters. But in the case of this past weekend's new release Charlie's Angels writer/director Elizabeth Banks, her comments about the comic book movie genre transcended just being a personal opinion to being a point I think is worth discussing. In an interview with the Herald Sun before the release of Charlie's Angels in theaters (that is important to note, as many people are under the false impression that these comments were made in direct response to Charlie's Angels poor reception and abysmal box office debut), Banks expressed the following sentiment: 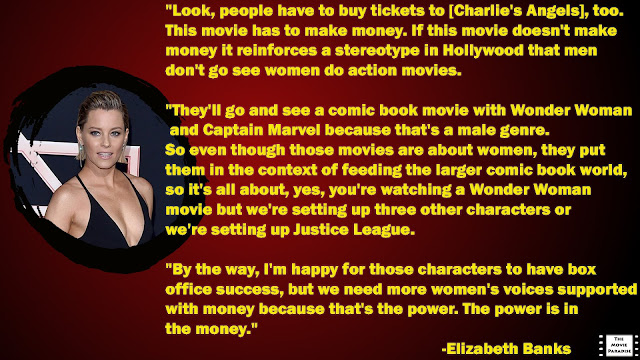 Comic book movies have struggled with inclusivity since the very beginning. Most comic book movies, for a very long time, were about white straight men made by white straight men. This is not the way any genre of film should operate, and it is a stain on the legacy of comic book movies. However, we are now in a new era of comic book movie filmmaking. A greater diversity in storytellers and the subjects of stories are being introduced. Black Panther debuted to great success, becoming the first comic book movie to secure a Best Picture nomination at the Academy Awards and went on the make $1.3 billion at the worldwide box office. Wonder Woman was one of the few DCEU movies to have good critical reception and had very respectable box office numbers. The aforementioned Captain Marvel joined the billion dollar club earlier this year. And there are only more on the way. Marvel has Black Widow and The Eternals coming out next year, both led by women (Scarlett Johansson and Angelina Jolie respectively). The following year is Shang-Chi and the Legend of the Ten Rings, as well as Thor: Love and Thunder which will have more LGBTQ+ representation. On Disney+ shows such as Wandavision, She-Hulk, and Ms. Marvel will also help expand the diversity in Marvel's characters. DC has Birds of Prey coming out next year, as well as Wonder Woman 1984. The recently announced Black Adam will have a person of color in Dwayne Johnson in the starring role. There are no excuses for the lack of inclusiveness in the previous decades, but things are definitely changing for the better now. 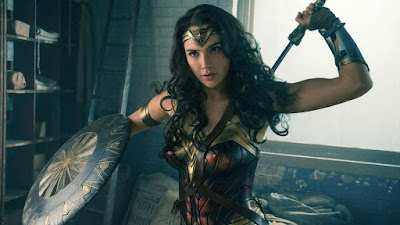 For Elizabeth Banks to try to classify comic book movies as a "male genre" is simply incorrect. And to the outside observer, I can see how this conclusion can be drawn. It is without any doubt true that they have starred men made by men for a very long time. However, things are certainly changing now in regards to on-screen representation. But the biggest oversight with this classification is the millions and millions of non-male comic book fans out there. Comic books and comic book movies have had a perception of being just for boys, but that perception is far from the truth. There are millions of fans of Captain America and Spider-Man and Batman who are not men, just as I, a man, am a fan of Wonder Woman and Captain Marvel. The genders of the characters do not restrict the genders of the fans. It may have had that unfair perception decades ago, but I think in the last nineteen years with the boom of comic book movies we have seen that that categorization is incorrect. The on-screen depictions are now finally catching up with the diversity of the people who watch them. Is Elizabeth Banks wrong in saying that comic book movies have been dominated by men? Not at all. Is she wrong in saying that action movies (in the larger genre sense, not just comic book movies) starring men have succeeded more than action movies led by women? Not at all. But these things are now changing for the better, and when someone makes an all-encompassing classification about the entirety of the genre, it negates those changes. Calling Hollywood out on its shit is vital, but saying comic book movies are a "male genre" and insinuating Wonder Woman and Captain Marvel don't count is a disservice to the non-male filmmakers leading the charge on this and is a disservice to the millions and millions of fans of these movies and this genre that are also not men. 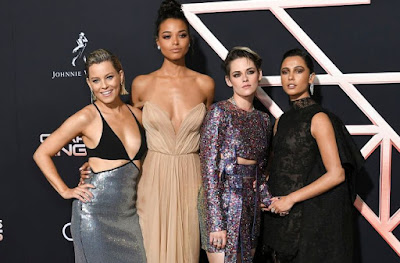 **And I'll add a quick footnote here. These sorts of topics can very easily devolve to misogynistic hate speech by internet trolls who hide behind a keyboard. Any comment or discussion that isn't a productive debate about the substance of the comments will be deleted. That sort of thing has no place here**
-------------
Written by: Nathanael Molnár
Follow us on social media: @movieparadise99
You can subscribe to us on YouTube: https://www.youtube.com/channel/UCeWJBTxo8N7ok_kNAApNixg?view_as=subscriber
Tune in every Saturday 1pm EST for The Movie Paradise Show, LIVE on YouTube!