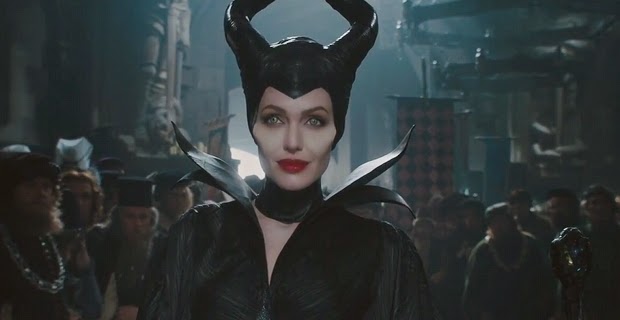 Maleficent (starring Angelina Jolie) is a "different" take on the story of Sleeping Beauty (and I'll explain later why I put different in quotations). Focusing on the fairy Maleficent who befriends a boy named Stefan (Sharlto Copley) who soon becomes the king of the realm. In order to become king, he strips Maleficent of her wings. Seeking vengance, she casts a spell on Stefan's first born, Aurora (Elle Fanning) that on the day of her sixteenth birthday she will prick her finger on a spinning wheel and "fall into a sleep like death" only to be awaken by true love's kiss.

This movie promised a different take on the story, but the only difference is that after Maleficent casts the spell, she watches Aurora grow up and regrets it and attempts to cancel the curse. The other people I saw this movie with though it was "clever" and "an interesting take" but I didn't like it nearly as much as they did. Angelina Jolie does a good job as the central character though not as good as people have been saying. I did not care for how it was written. It was a bit too "cutesy" for me with the creatures and the fairies and magic. Even though I did not like Snow White and the Hunstman overall, I did appreciate how it was darker and tried to leave out a lot of the cute creatures and pixie fairies and all that. For me, that's the major part where Maleficent went wrong, as well as suffering from a weak script that made Aurora a whiny little girl, the king a complete jackass and in my personal opinion, Maleficent, though being the main star, was underused. For the middle of the story she was simply a stalker who just stood and watched the story from the distance.

This movie promised to be a different take on the Sleeping Beauty story with a strong performance by Jolie. In my opinion, it delievered neither. There were some cool parts that made it not a complete failure but for the most part it was disappointing and underwhelming. If you want to take young children to see a movie, this is a good movie for that. But for adults or teenagers or even older little kids, I don't recommend it.