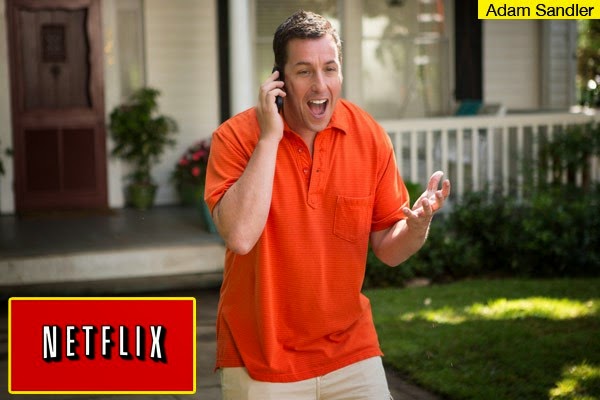 Adam Sandler has recently become some-what of a joke in the film industry today. From Jack and Jill to his latest "effort" Blended, he has put out some of the laziest pieces of crap in movie history not made by M. Night Shyamalan. But there's hope. I recently saw his 2007 film Reign Over Me, which is a drama and Sandler gives what I believe was an Oscar-worthy performance. I think if he does more dramas instead of comedies, he could make a comeback with his career.

Now, Sandler has made a deal with Netflix to release his next 4 films exclusively on the site. In the statement, Sandler said

"When these fine people came to me with an offer to make four movies for them, I immediately said yes for one reason and one reason only. Netflix rhymes with Wet Chicks. Let the streaming begin!!"

Perhaps Sandler will release some of his comedies to Netflix where whoever is interested can watch and save his dramas for theatrical release, or maybe he's just getting into business with a profitable company. We'll have to wait and see.

What do you think? Do you like Adam Sandler? What could this Netflix deal mean for his movies? Leave your thoughts in the comments section below.
adam sandler blended jack and jill m. night shyamalan nate netflix reign over me