So yesterday it came out that this Avengers: Age of Ultron trailer was going to premiere on TV during Agents of S.H.E.I.L.D. I wrote a whole article about it, sh*ting on the terrible show for most of it. I left for a bit and when I came back to post the article, it was somehow deleted. Depressed, I went online and saw that the trailer was posted which leads me to this article: the trailer for Avengers: Age of Ultron has been released!

After it was leaked online a week before it was meant to be released, Marvel put out the HD version officially online, tweeting "Dammit, Hydra" (Captain America: The Winter Soldier reference). You can see the trailer above. 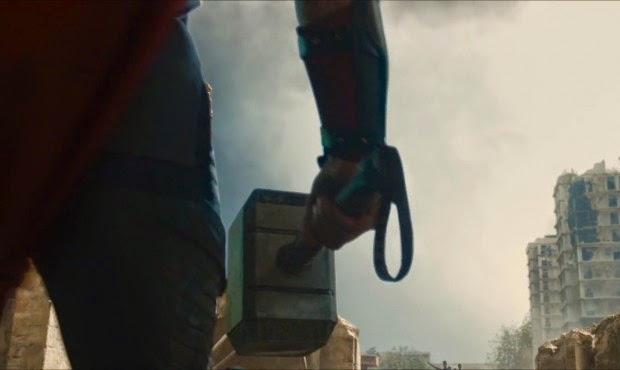 The trailer is very ominous and somewhat creepy. That's mostly thanks to the song used which is a huge contrast to the Nine Inch Nails song used in the trailer for the first movie. I am a big fan of The Blacklist so when I heard the Ultron narration (voiced and mo-caped by James Spader) all I could hear was Spader's character on the show.

The trailer is very similar to the reported one at San Diego Comic Con with some minor structural differences. We get to see the many different looks and versions of Ultron as he upgrades throughout the movie. We see Iron Man in his Hulkbuster armor fighting the Hulk.

We got to see Quicksilver and Scarlet Witch in action who are played by Aaron Taylor-Johnson and Elizabeth Olsen.

We also got to see our first look at Andy Serkis, who was brought on as a motion capture consultant but revealed that he has a role in the film. Many people are thinking he could be Ulysses Klaw, a major villain for the Black Panther- and we do know Black Panther's homeland, Wakanda, IS in fact making an appearance.

This is a very good first trailer and I am excited to see more.

Written by: Nate
Email us your movie questions at: themovieparadise999@gmail.com
Like us on Facebook and follow us on Twitter @movieparadise99
avengers age of ultron marvel marvel cinematic univers nate superhero the avengers trailer ultron