Top 5 Favorite Moments From: The Matrix

This is the second installment of this new series where I basically take a movie and pick my personal five favorite scenes from that movie. Then, you can go into the comments and say why you either agree or disagree with me. The movie I am doing is (I know I've said this before, but) my favorite movie: The Matrix. Warning- there are spoilers! 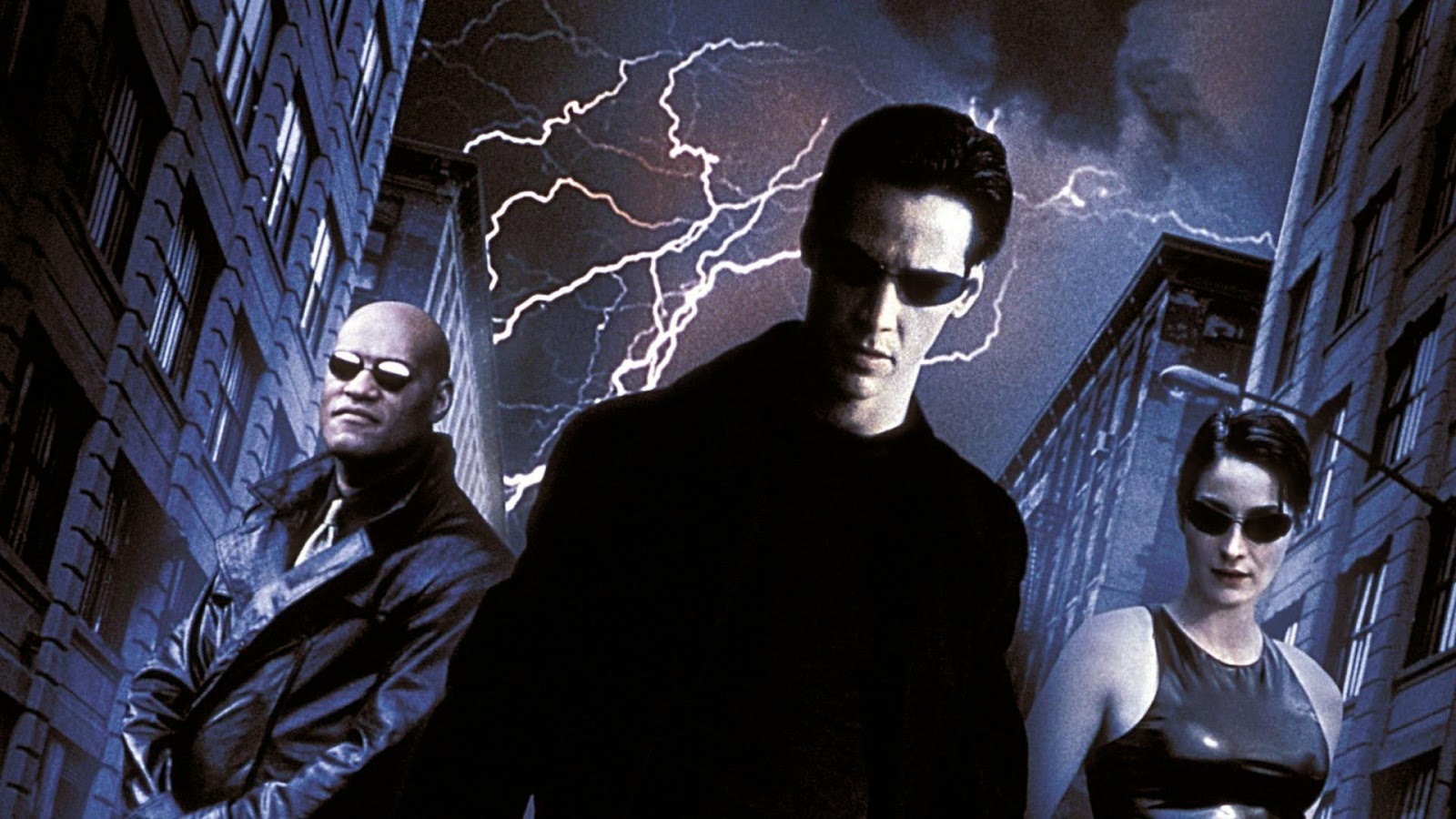 After Neo (Keanu Reeves) has been brought into the real world, he is given training, where he learns pretty much every way possible to be a badass. After all his training, Morpheus (Laurence Fishburne) challenges him to a fight in the Construct, a program similar to the Matrix. Here, Neo and Morpheus go all out in a fight. What could have just been a plain and simple fight was turned into something truly special, mainly because of the excellent direction from The Wachowski Brothers (now Siblings, but since they are credited for this movie as brothers, I will refer to them for this as such). First off, they didn't want stunt doubles doing these fights-- they wanted the actual actors to learn how to fight. If you want the behind the scenes, you get to see Reeves and Fishburne rehearsing the scene, looking like professional kung-fu fighters. And you can tell watching the scene that it is really the actors in the scene because the camera doesn't cut every three seconds. There are long continuous takes that could have only been achieved by lots of practice and skill. 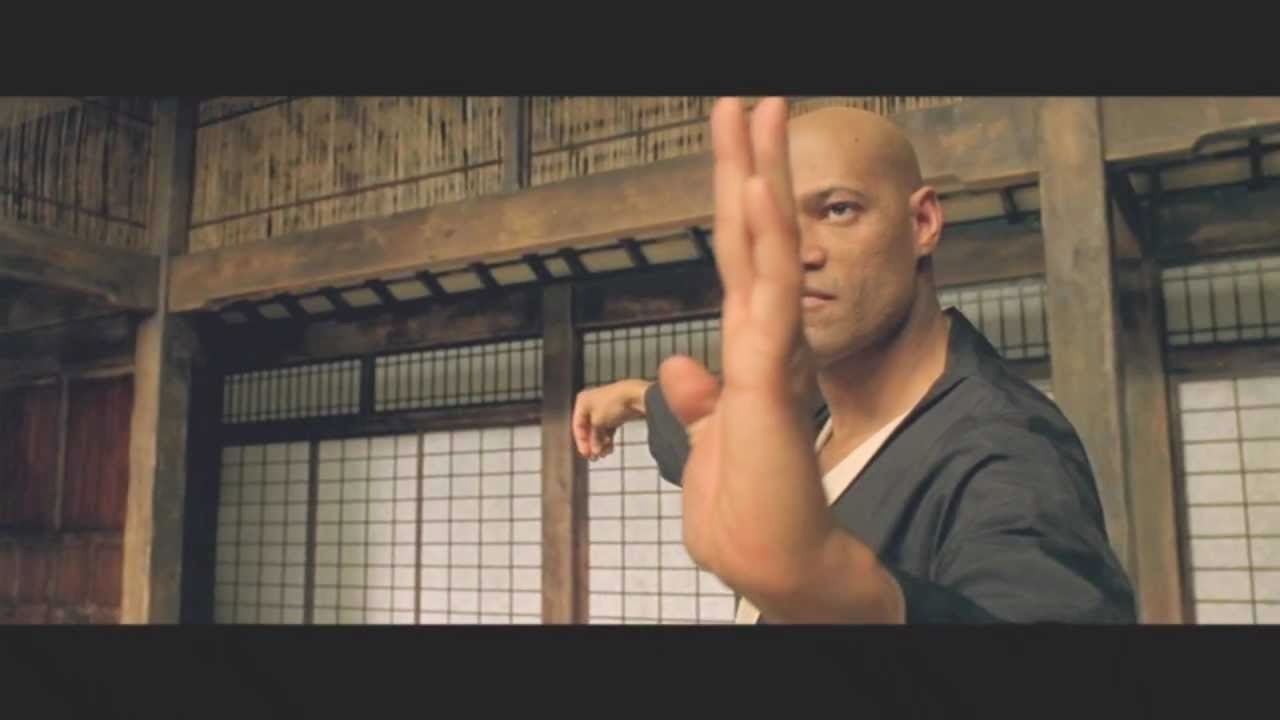 While this isn't the best action scene of the movie, it is one of the most organic, and I'll explain what I mean by that. In a lot of movies, the action feels somewhat out of place. The main reason for this is the editing. Shaky cam is integrated into the film as well as rapid cutting, which can easily take you out of an action scene. What this fight, and really the entire movie, does so perfectly is it does the complete opposite. By having these really awesome fights with long, continuous takes and a still camera, the action feels a lot more natural. 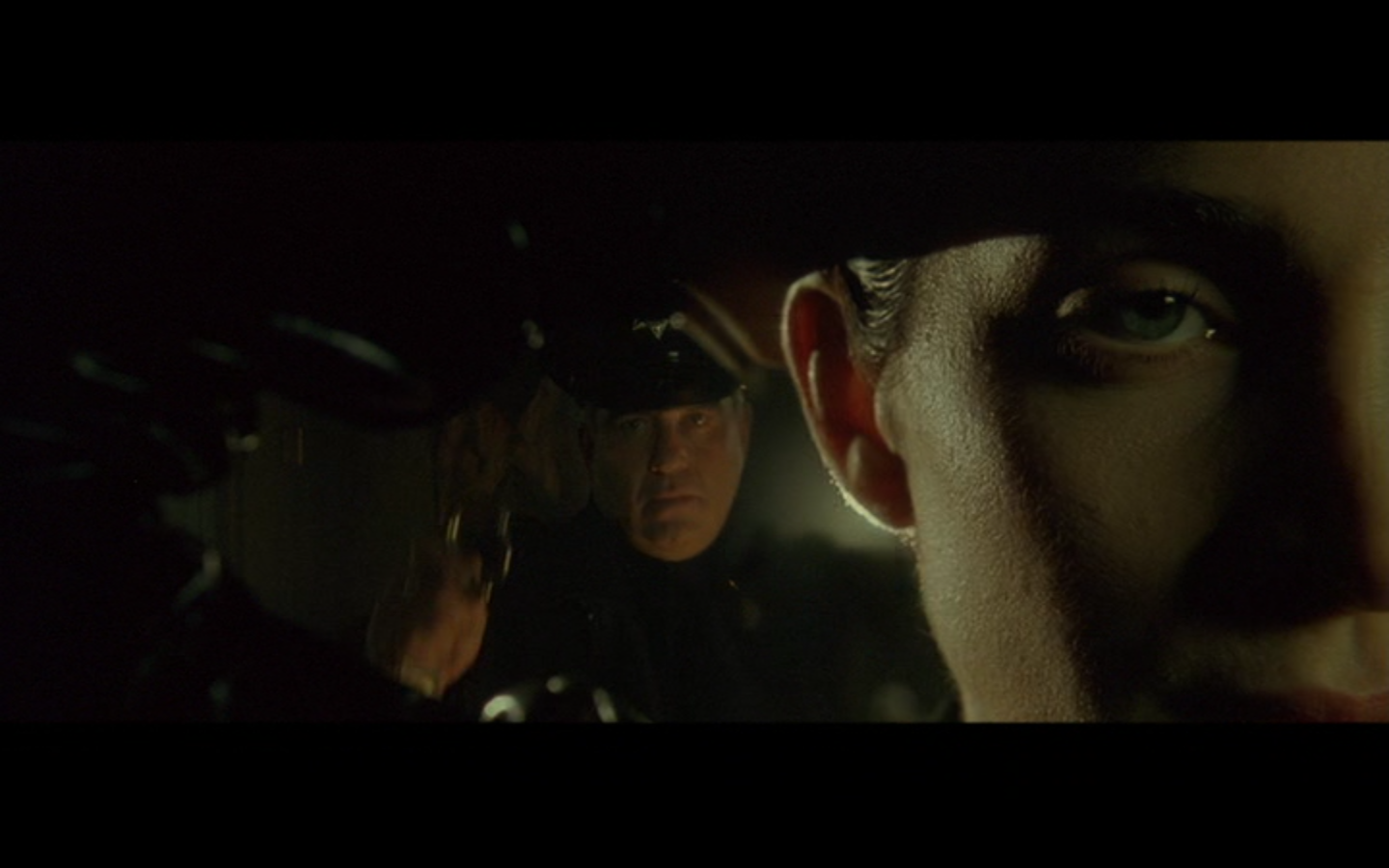 This movie has probably one of the best openings I have ever seen. Trinity (Carrie-Ann Moss) is trapped in a building by some cops, who are ready to take her in when she fights them off. She goes into bullet time (which I'll go into more detail on later), runs on walls and is completely badass. Then the Agents show up and chase her over roof tops. The cops watch, exclaiming "That's impossible", which is exactly what the audience is thinking as all of this plays out. I love it when a movie has references early on to something that is explained later on, which makes the second viewing and subsequent views even better.

This opening scene really dives into the movie headfirst, giving us a glimpse at all these little elements that will come into play later, such as the Agents, the telephone booth, defying gravity and all these other things. Sometimes it can feel like a movie is going out of its way to reference things that will later be explained, but The Matrix plays through this scene so perfectly that it doesn't feel out of place in that sense. You could watch it on its own and believe it was from halfway through the second act of the film.

This five second scene (watch it here) is probably one of the most famous parts of the movie. An Agent has a gun aimed at Neo and opens fire. Neo dodges the bullets in this slow-motion panoramic shot. I already loved this scene but loved it even more after learning about how it was made (watch it here). This scene holds up on its own as being something that was copied over and over again after The Matrix came out. I have yet to see anyone dodge bullets with as much style as Neo.

I'm going to cheat a little bit, but not really. For this scene, I am counting all the way from the famous lobby shoot out to the Agent Smith's monologue to Morpheus to the actual rescuing of Morpheus to the helicopter crash. It is cheating a little bit but in a way it is all one scene. Just a very long scene. Let's start with the government lobby shootout.

With Morpheus captured by the Agents, Neo and Trinity prepare to rescue him. But first, they have to get through an army of soldiers. This scene has become one of my favorite action scenes of all time. I covered this before but to reiterate: most action movie use shaky cam and rapid cutting to make their scenes but this entire shootout is in slow motion. There are long continuous takes. With pulsing rock music in the background, Neo and Trinity tear through the soldiers in the most badass way possible. It's hard to describe how awesome it is. You just have to see it. Through this article, to quote Morpheus, I can only show you the door. You're the one who has to walk through it. 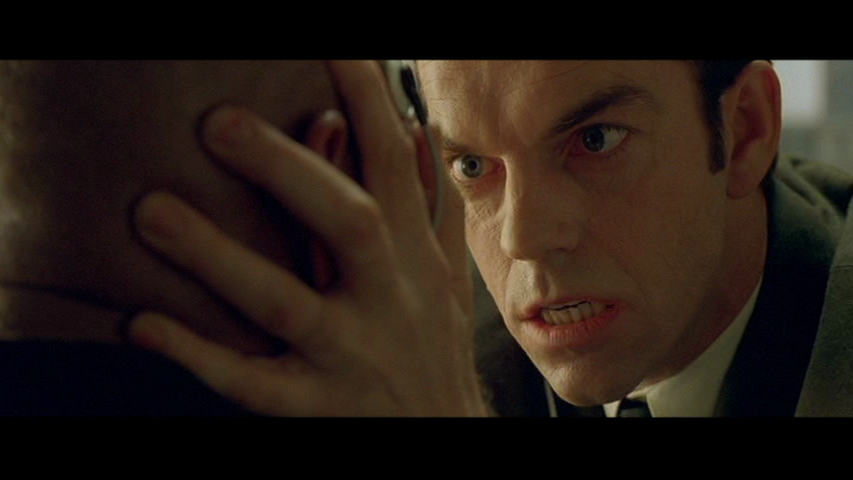 While trying to break Morpheus down to get access cods to Zion, Agent Smith (Hugo Weaving) asks the other Agents to leave the room for a moment. He then sits and proceeds to explain to Morpheus that humans are a disease and how we are similar to a virus. He also talks about how he is sick of being in the Matrix and wants to be free. The monologue is perfectly written and performed with at first a restrained and subtle anger which then turns into such a dark and powerful performance that you become legitimately scared of Agent Smith and what he is capable of. 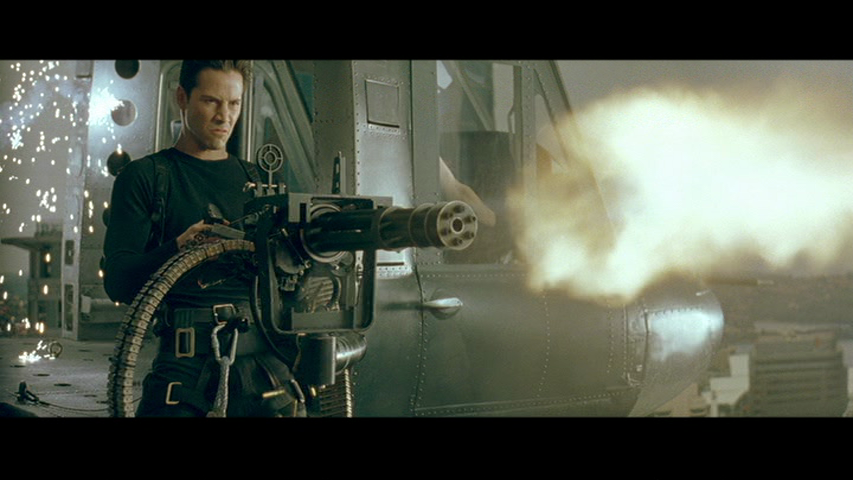 To break Morpheus free, Neo and Trinity fly up to the level in the building in a helicopter with a giant turret gun and demolish the room, seemingly defeating the Agents. They then rescue Morpheus from the room. Not only is this scene just awesome but there are a lot of cool shots, such as the shells falling from the helicopter to the slowed down analysis of the scene where the camera shows, in a frozen frame, an Agent firing a gun and Morpheus getting shot in the leg. That shot's kind of hard to describe; you'll just have to see it yourself. The helicopter then crashes into the side of a building. We see the glass ripple like a pebble in a pond before shattering and exploding. It's probably the best way ever to destroy a helicopter. I know it's cheating a bit to have all this be one scene, but in the context of the movie, it kind of is.

Before getting to number one, I'd like to name some honorable mentions: Red vs. Blue: Morpheus and Neo sit opposite in a chair as Morpheus gives Neo a choice between taking the red pill or taking the blue pill. There is no spoon: A child explains to Neo that "Don't try to bend the spoon. Instead realize the truth. There is no spoon. Then you'll realize that it is really yourself that bends". The Fields: Neo wakes up and sees the endless fields of human beings been harvested into living batteries for the machines. In the Matrix: A panoramic shot of the people hooked up to the Matrix and circling around a telephone, finally revealing them to be standing on the other side of the phone. It's a cool shot in the film and my description probably didn't do it justice. Wake Up: The final shot of the movie where Wake Up by Rage Against the Machine plays as Neo steps out of a phone booth. The shot is a perfect way to end the film.

After rescuing Morpheus and the movie is seemingly over, Agent Smith comes after Neo. He can easily run away from Smith but Neo stands his ground and is ready to fight, despite the fact that no person who has ever fought an Agent has won. This is my favorite scene from the movie because the fighting is incredible. They use a shot of bullet time in the scene which looks great. Then it leads into an awesome and brutal fight scene in the subway. The choreography is fantastic for this scene and again they use long takes, so you can clearly see it's the actors doing the scene not a stunt double. 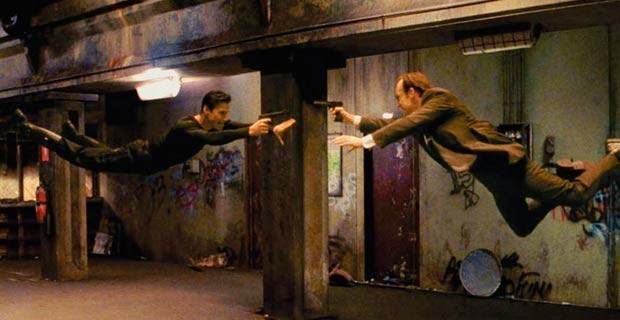 Neo then seemingly defeats Agent Smith when he is hit by a train, however Agent Smith comes back and then Neo decides to run. In this scene where Neo runs all over the city as the Agents chase him, shaky cam is used but it's effective. It's not used to cover up stunt doubles or bad fighting, it's used to add to the tension in the scene. It ends with Agent Smith shooting Neo point blank in the chest several times, only to have Neo rise up, proving he is the one.

Those were my five favorite moments from The Matrix. Before I end this, I just wanted to touch on a few reasons why this is my favorite movie of all time. This movie defied the average action movie. It didn't use shaky cam or rapid cuts as I said before. The actors trained for several months in order to do the stunts themselves. But the big thing that made this so great for me was the story. Action movies are notorious for having weak stories in favor of good action and they can only pull it off if the action is good enough that the weak story can be over looked. But this movie is different. The action became a byproduct of the story. The narrative and the development of Neo's character came first and the awesome action scenes were used to enhance the story. There were also a lot of metaphors and philosophical themes but they're done in a way where they are an extra bonus if you understand it. The genius way about how this film was made is that if you want just a cool action movie, it can serve that purpose but if you understand the deeper meanings of the movie then the film becomes so much more than what it is on the surface. 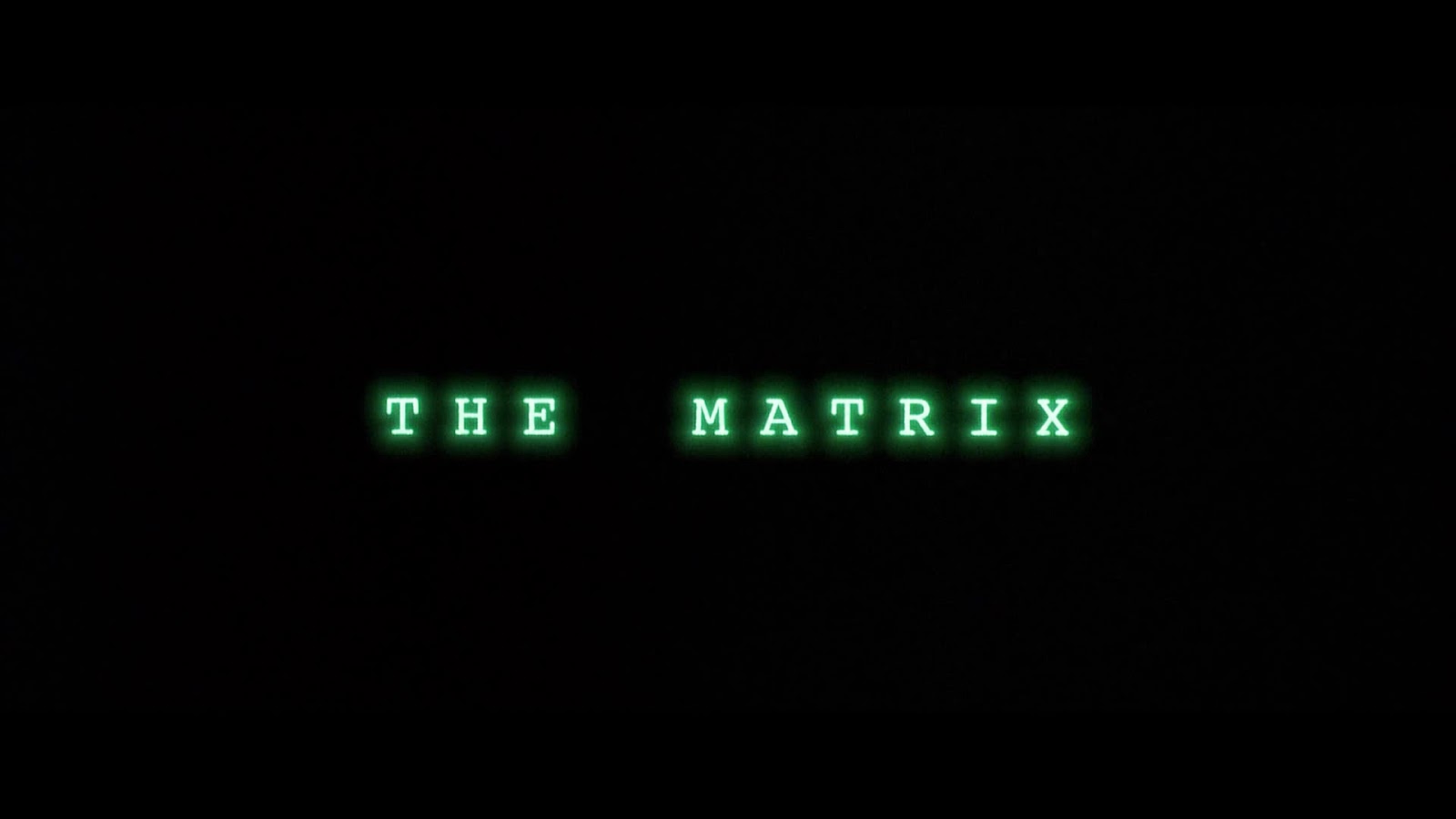 What do you think? How would you rank your favorite moments from The Matrix? Did I miss any? Leave your thoughts in the comments section below.