Let me first say that I am not really big into children's movies with fairies and magic and wonder and all of that. I'm not. I didn't do an article for the Cinderella trailer because, honestly, I hated it. I did not like Maleficent (read our review here, and it wasn't a good one). That's just not the type of movie I'm into. The only reason I had any kind of interest in this movie was because of Hugh Jackman, whom I think is a terrific actor. So I started this trailer, expecting it to be all about courage and finding yourself and all this magic and crap. But this looks very, very different.

The trailer caught my attention with a very dark beginning. Now, while the rest of the trailer eased up a bit on that darkness, it wasn't as cutesy as I was afraid it was going to be. I was also afraid that Jackman was going to overact as Blackbeard, he looks fantastic. He looks sinister, evil, maniacal but by the end of the trailer, we sense there is something else to his character we will just have to wait and see. The kid playing Peter Pan didn't annoy me like I thought he was going to, but he has a whole movie to do that, so we'll have to wait and see about that. The visuals looked amazing and they made some serious changes to the mythology, which I thought were very interesting and good choices. I did not like the song that played throughout the trailer, however, and I felt it didn't really fit the tone of the trailer. Introducing the Hook character as a friend of Peter Pan's, while clichéd, didn't really bother me. It could turn out to be a very interesting story line. However, the joke in the middle of the trailer about the princess was out of place and wasn't really funny at all. 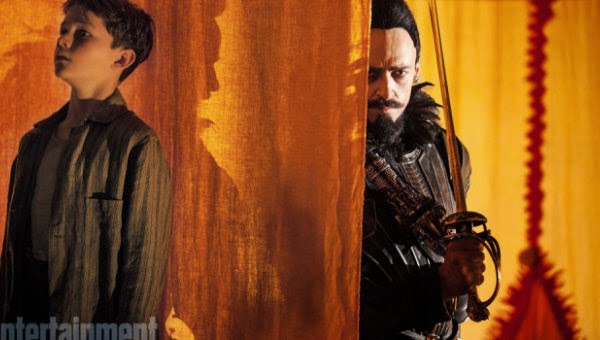 Was it a fantastic trailer? No, but it did make me more interested in the film. I think, if nothing else, Jackman will give a brilliant performance, but I think the movie has a lot of potential to be much more than just that. We'll have to see how other trailers play out.

What do you think? Did you like the trailer? Are you looking forward to Pan? Leave your thoughts in the comments section below.