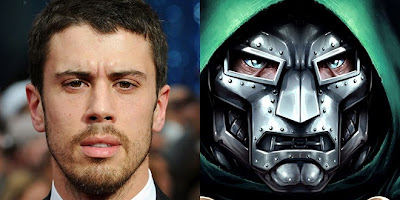 A little while ago we got some set pics released of the movie's villain, Doctor Doom (read out article about it here) and now we have some information about the changes made to the character. Toby Kebbell, who will play Doom, said this:

“He’s Victor Domashev, not Victor von Doom in our story. And I’m sure I’ll be sent to jail for telling you that. The Doom in ours—I’m a programmer. Very anti-social programmer. And on blogging sites I’m ‘Doom.’ “

I can already hear the sweaty nerds raging about this on online chat boards. Is it a departure? Yes, but all comic book movies make departures. Granted, it is a big departure but who cares about the backstory... what matters is will Doom be awesome when he puts on the armor and fights the Fantastic Four. That's all that really matters and if they accomplish that aspect, I could care less that he was a blogger and computer geek before he became Doom.

What do you think? Do you like the changes made to Doctor Doom? Do you hate them? Are you looking forward to this rebooted Fantastic Four movie? Leave your thoughts in the comments section below.