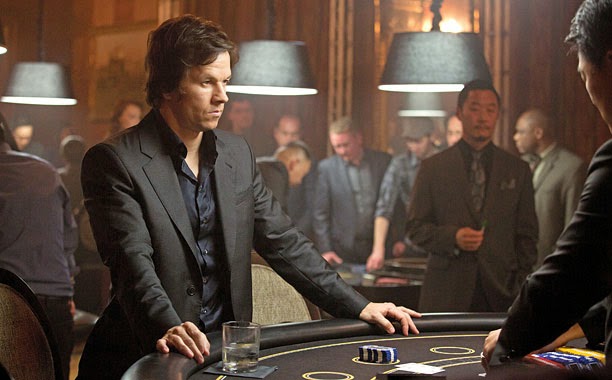 The Gambler is not really a movie I would have normally seen. The premise didn't sound very interesting, the trailers didn't look that good and the reviews coming out were bad. But, my friend wanted to go see it so I decided I would to. One last review to finish off 2014, right? I have found that when you go into a movie with low expectations, it usually surpasses those expectations. And that's exactly what The Gambler did.

The movie focuses on Mark Wahlberg's character named Jim Bennett, who grew up in a wealthy family and has always seen privilege. On the outside, he seems like he must have a pretty good life. By day he's an English professor who seems like he's a pretty cool teacher. But at night, he goes to the casinos and plays Blackjack. However, Bennett is in deep debt with some really powerful people and the basic plot of the movie is Bennett trying to pay back those people and struggling with his gambling addiction.

Wahlberg was good in this movie. Was he fantastic? No, but he was able to carry the movie just fine. I never really bought him as a college English professor, mainly because of how they had set up the character. But for the other parts of the movie he played this asshole of a character who was very unlikable. For me personally, his unlikability (yes, I just made up that word) made me root for more, which is kind of hard to rationalize. Something this movie did really well was it showed the power of addiction without hitting you over the head with it. It was subtle in how it showed Bennett's addiction to gambling and it never once felt as if the movie was preaching an anti-gambling message.

The supporting cast was good as well. Michael Kenneth Williams plays a mobster named Neville Baraka, whom Bennett owes money to and I think he was the best character in the film. He was fun and funny at times but when he needed to, he turned into this dark, cruel person, reminding why he was so feared. For most of the movie, he sits in the background, seeing how his decision to lend Bennett money in the very beginning of the film will play out. Then by the middle he begins to become more involved. I thought Williams played him really well and was my favorite performance in the movie.

Brie Larson did a good job as one of Bennett's students who becomes his lover, but I felt they didn't give her enough to do in the movie. She was set up to be an integral role in Bennett's character arc but then she disappeared halfway through the movie. I felt she could have been utilized better. And while her character wasn't on screen very long, Jessica Lange did a really good job as Bennett's mother. She played her character very well so that you understood the relationship between her and her son without anything really being said about it.

John Goodman was in this movie for very briefly, but he was really good. His character, Frank, is another mobster whom Bennett has to go to to get the money to pay off the other people he owes. He was the comedic relief in this movie and did a really good job with it, especially his whole monologue about "F*ck you", which you'll get when you see the movie. But, my one complaint about Goodman is that he was shirtless one too many times in the film. It seems to me that most people didn't like this movie because they were comparing to the original from the 1970s. I never saw the original, which is probably why I like it a lot more than other people do. I didn't think it was a brilliant movie, but it was entertaining and the gambling scenes were done really well. However, for a movie called "The Gambler", there weren't a lot of gambling scenes in it. I think there was only like three. Overall, The Gambler is entertaining with a good performance from Mark Wahlberg, but stronger ones from the supporting cast. It rarely drags and at times can be really funny. It also shows you a very subtle study of the effects of an addiction and how it can consume and ultimately ruin your life. 7.6/10.

What do you think? Did you see The Gambler? Did you like it? Leave your review in the comments section below.