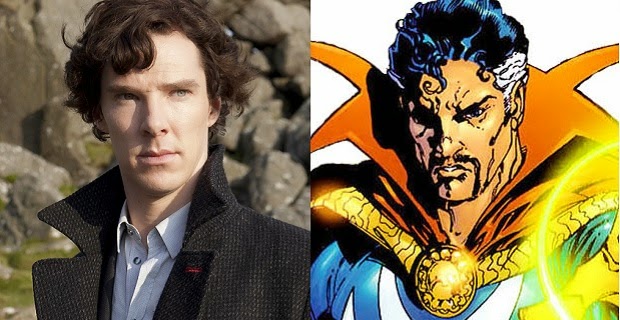 One of the biggest speculations in recent memory was who would play the lead in Marvel's upcoming Doctor Strange. For months we all speculated who it could be- is it Tom Hardy? Is it Joaquin Phoenix? Then, in early December, we got our answer. Long rumored (and my personal choice) Benedict Cumberbatch would be playing the Sorcerer Supreme (read that article here). Since the fire surrounding the property has died off a bit, we have heard relatively little about not just the film but from Cumberbatch about the casting. Well now, Cumberbatch has spoken out. In a recent interview with The Wall Street Journal, Cumberbatch was asked whether accepting the role would be a "risk" for his career. To that, he responded:

“I don’t think it’s a risk because of Marvel. Marvel is a stable of bringing out ordinary comic characters and turning them into screen-like gods. It’s very different, it’s an Astral Plane. There’s a huge new element to this Marvel universe that’s going to be employed in building this story and this character. But you know, I’m really excited about it, about working with Scott [Derrickson] whose imagination is endless, and all the boys and girls at Marvel who know what they’re doing. I’ve got a few things to get under my belt first. I’ve got to do that little stage production of “Hamlet” in the summer and the Christmas special of “Sherlock,” which we start shooting in about three days’ time – Whoops! Yeah, that’s there.”

Overall, Cumberbatch's comments are very interesting. It wasn't too long ago that no "serious" actor would consider doing a comic book movie, but now, even Al Pacino is wanting to be in one (read that article here). So it's very true what he's saying: it's no longer a risk to be in a comic book movie (unless you're George Clooney), because they're so loved and so meticulously crafted. It's also always great to hear an actor being genuinely excited to work on a project so beloved as this.

What do you think? Do you like Benedict Cumberbatch's comments? Are you excited for Doctor Strange? Leave your thoughts in the comments section below.