The 72nd Annual Golden Globes- Wrap Up and Reaction 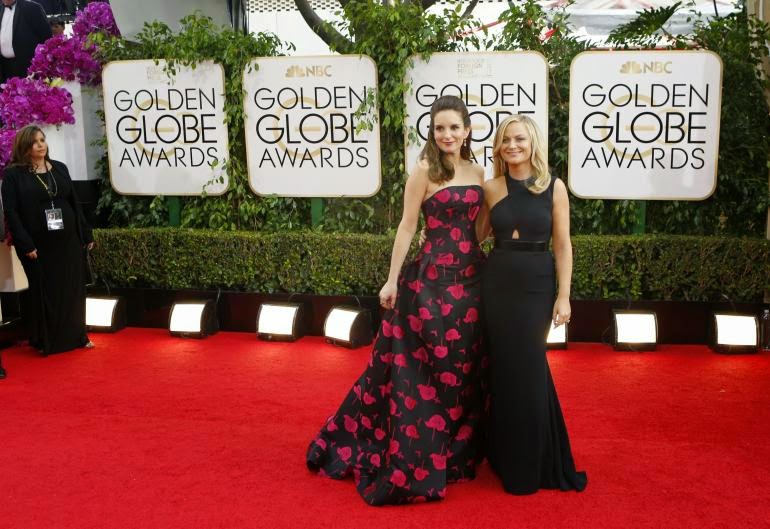 On Sunday Night, the 72nd annual Golden Globes aired on television. Run by the Hollywood Foreign Press, the Globes celebrated the year of 2014 in film. The show was hosted by three-time Globes hosts Tina Fey and Amy Poehler, who made it clear that this would be their last time hosting the show. In this article, we'll talk about the show, the jokes, who won, who didn't win, what worked and what didn't. So, let's get started.

Amy Poehler and Tina Fey are two of the funniest women working in the business today. The past three years they have added so much to the Golden Globes and have found the perfect amount of roasting without being offensive. However, I think this year's opening monologue was their weakest yet. There were some really funny moments, but some of the jokes fell flat and some didn't really get me the right way. It felt like they were off their game. It's unfortunate that they were disappointing, but it's even worse that it's their last time hosting. But despite it not meeting expectations, they did have some good moments, so here's some of my favorite jokes of theirs from the show:

-When playing a game of "Who would you rather (have sex with)" between Boyhood director Richard Linklater and Birdman director Alejandro González Iñárritu, Poehler picked "Iñárritu, two hours straight, no stopping" while Fey picked "Linklater, five minutes, once a year.

-When talking about Into the Woods, the movie was explained as "Cinderella runs from her prince, Rapunzel is thrown from a tower for her prince and Sleeping Beauty thought she was just getting coffee with Bill Cosby".
-When talking about Reese Witherspoon in Wild. "She did all her own walking. Amazing, so brave. And Andy Serkis was great as her backpack."

-When talking about George Clooney's new wife "She's a human rights lawyer who worked on the Enron case, an advisor to Kofi Annan on Syria and was appointed to a three-person commission investigating rules-of-war violations in the Gaza Strip. So tonight, her husband is getting a life-time achievement award.

-When talking about The Theory of Everything "It combines the two things audiences loves- a crippling nerve disease and super complicated math".

-When talking about Big Eyes "I think we have one of the Big Eyes painting here today!" Cuts to Emma Stone.

The night had some really good presenters and some who had us just waiting for the show to move on. So here are some of the show's highlights. 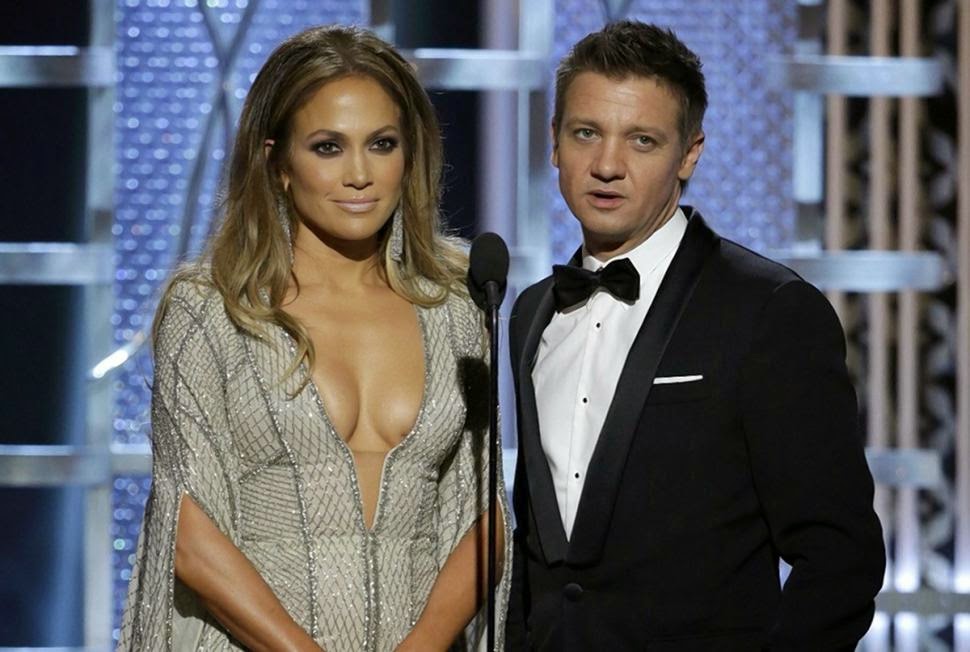 Probably one of the funniest ones was when Jennifer Lopez and Jeremy Renner were presenting. They were getting ready to announce a winner and Renner just said what everyone was already thinking. Renner is trying to open the envelope but can't get it open. Lopez says "Let me open it. I have the nails." Renner replies "Yeah and you've got the globes too!" I burst out laughing. The room got dead silent and then the show tried to move along. It was hilarious and probably one of the most memorable parts of the night. 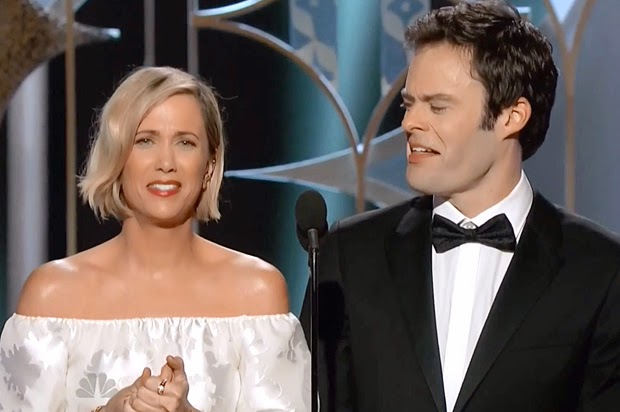 There were also some mediocre presenters. I was really looking forward to Kristen Wiig and Bill Hader's presentation, but I didn't really find their bit that funny. I also didn't care for Ricky Gervais's first presentation. Unfortunately this year, there were more bland presenters than entertaining.

So here are all the winners for the movie portion of the Golden Globes Award Show:

Best Lead Actor in a Drama- Eddie Redmayne, The Theory of Everything

Best Animated Film- How to Train Your Dragon 2

Best Original Score- Jóhann Jóhannsson, The Theory of Everything 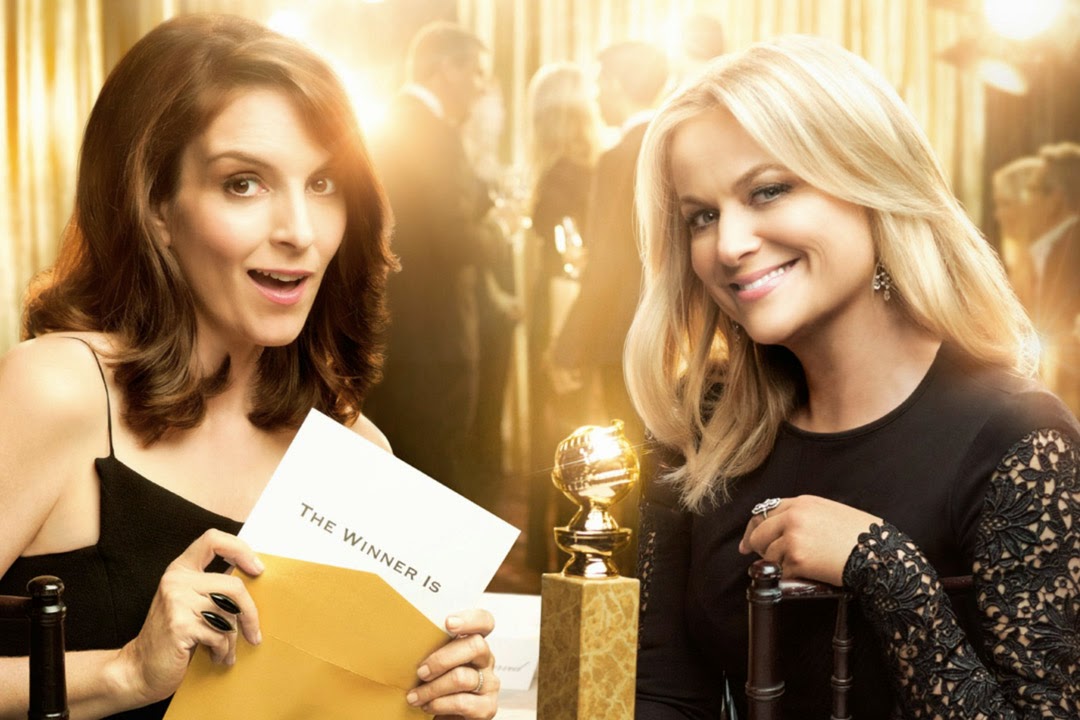 The one thing that really stood out to me was that The Grand Budapest Hotel won over Birdman. I think Birdman has a legitimate shot at winning Best Picture for the Academy Awards, over Budapest, so it shocked me that Budapest won the Globe.

Overall I thought the show itself was mediocre, but I don't disagree with the winners of the awards. What do you think? Did you watch the Golden Globes? Did you like Tina Fey and Amy Poehler? Who should host next year? Do you agree with the winners? Do you disagree? Leave your thoughts in the comments section below.