Kristen Stewart Wants to be in the Marvel Cinematic Universe?? 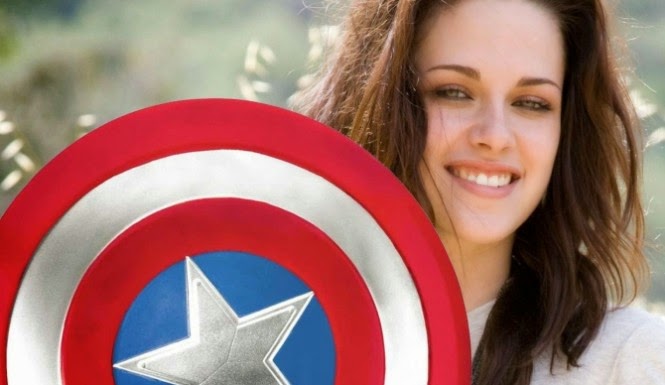 The success of Marvel Studios has brought about a lot of interest. Last year's Captain America: The Winter Soldier saw the inclusion of acclaimed actor Robert Redford as well as Judi Dench in Guardians of the Galaxy. Comic book movies are becoming desirable films for reputable actors. It wasn't too long ago that Al Pacino confirmed that he had met with Marvel to discuss the possibility of being in a film (read that article here). All sorts of actors have expressed interest in being in a Marvel film. And now we can add another actor to that list. Kristen Stewart.

In a recent interview, Stewart said how she is interested in joining the Marvel Cinematic Universe, saying:

“I love watching those movies. I would love to show people that I can do more than just be ‘Kristen Stewart’ in a different movie, in a different circumstance.”


“I’m sure I could get on board with Captain America, you know what I mean?… It would just have to be the right thing.”

Look, I don't like Stewart as an actress. I don't think she's very good at acting. Every time I see her in a movie she's bad.  Is it possible that there could be a role she'd be good at? Yes, but I personally don't want her in there at all. I think this will show Marvel's true integrity. Stewart is a popular choice and they could get her for a role even though she isn't that good. Or they could get a fantastic actress who isn't as well known and will knock it out of the park. Marvel has been known for the latter, but if they get to Stewart to be, say Captain Marvel, I will lose some of the respect I have for them.

What do you think? Could you see Kisten Stewart in the Marvel Cinematic Universe? Who could she play? Leave your thoughts in the comments section below.