This May will see the release of arguably the biggest comic book film since it's predecessor's release in 2012, in Avengers: Age of Ultron. It reunites all the Marvel Cinematic Universe heroes in an epic battle against the titular villain, Ultron. I put this movie as my most anticipated film of this year (you can read that article here). And it's strange to think that the film is only a few short months away. So with that comes a heightened marketing plan. We've already gotten two trailers, plot details and a bunch of stills. Something we've lacked a lot of though is any real images of Paul Bettany as the android the Vision. And while I do think in the next month we'll have seen some sort of official image of the character, there are still some major question marks about his character. How much will he be involved? Who actually creates him? Is he a spawn of the JARVIS program? These are questions we may not know the answers to for a while, but something we did get to learn from Bettany is a bit about his experience with the film. 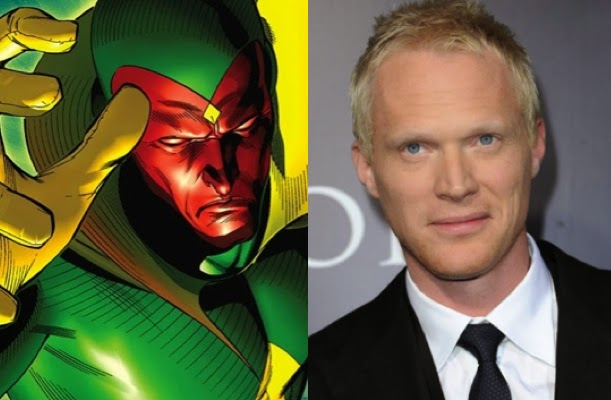 In a recent interview, Bettany talked about the size and scope of the film, saying:

"I’ve never been on a bigger set on my entire life than in The Avengers [Age of Ultron]. One [part] seemed to be the corner of a town, with helicopter cameras, and drone cameras flying about. I just haven’t seen anything that big, so it was like being a kid on a film set again."

“This is the biggest thing Marvel have ever done. It was enormous. I remember, we were at Comic-Con, and they showed a portion of the footage, and I was just gobsmacked. And I looked down the row and every one of the Avengers was the same. Including Samuel Jackson – and his whole modus operandi is ‘I’ve seen everything before, I’m the most chilled out, relaxed man and I’ve seen everything…’ and he was as knocked out as anyone. It’s huge.”

I have said this countless times, but I am so excited for this film. To me, The Avengers is the best Marvel film to date (with Guardians of the Galaxy at a close second) and I think this sequel has the potential to overtake it. To me, I care more about the story of a film rather than the size of it. However, Marvel has shown that they care equally about the story and the development of their characters as well as making an entertaining experience for the audience. So the prospect of this movie having such high stakes and being so epic is exciting to me. I thought The Avengers was a very big movie. For God's sake, a goddamn alien invasion attacked New York! How much bigger can you go? I'm very excited to see where this goes. What's also interesting is that this film is Marvel's biggest budgeted film to date, with over $250 million dollars. Just from the trailers we can tell that this film is going to be big. They traveled to many different places around the world to film, and with Ultron having an entire army of drones for the Avengers to fight... this is going to be one hell of a movie. And it's always cool to hear about an actor's thoughts on seeing a finished copy. When you're acting, you have a green screen behind you and you're holding a plastic shield. But when you see the finished film, you're Captain America fighting off an alien invasion. The actors are just one piece of a very complex machine. So it's cool to hear that an actor is so blown away by the end result.

What do you think? Do you like Paul Bettany's comments? Are you looking forward to Avengers: Age of Ultron? Leave your thoughts in the comments section below.