Top 5 Favorite Moments From: Rise of the Planet of the Apes

This is the third installment of this new series where I basically take a movie and pick my personal five favorite scenes from that movie. Then, you can go into the comments and say why you either agree or disagree with me. The movie I am doing is Rise of the Planet of the Apes. Warning- there are spoilers!

Rise of the Planet of the Apes 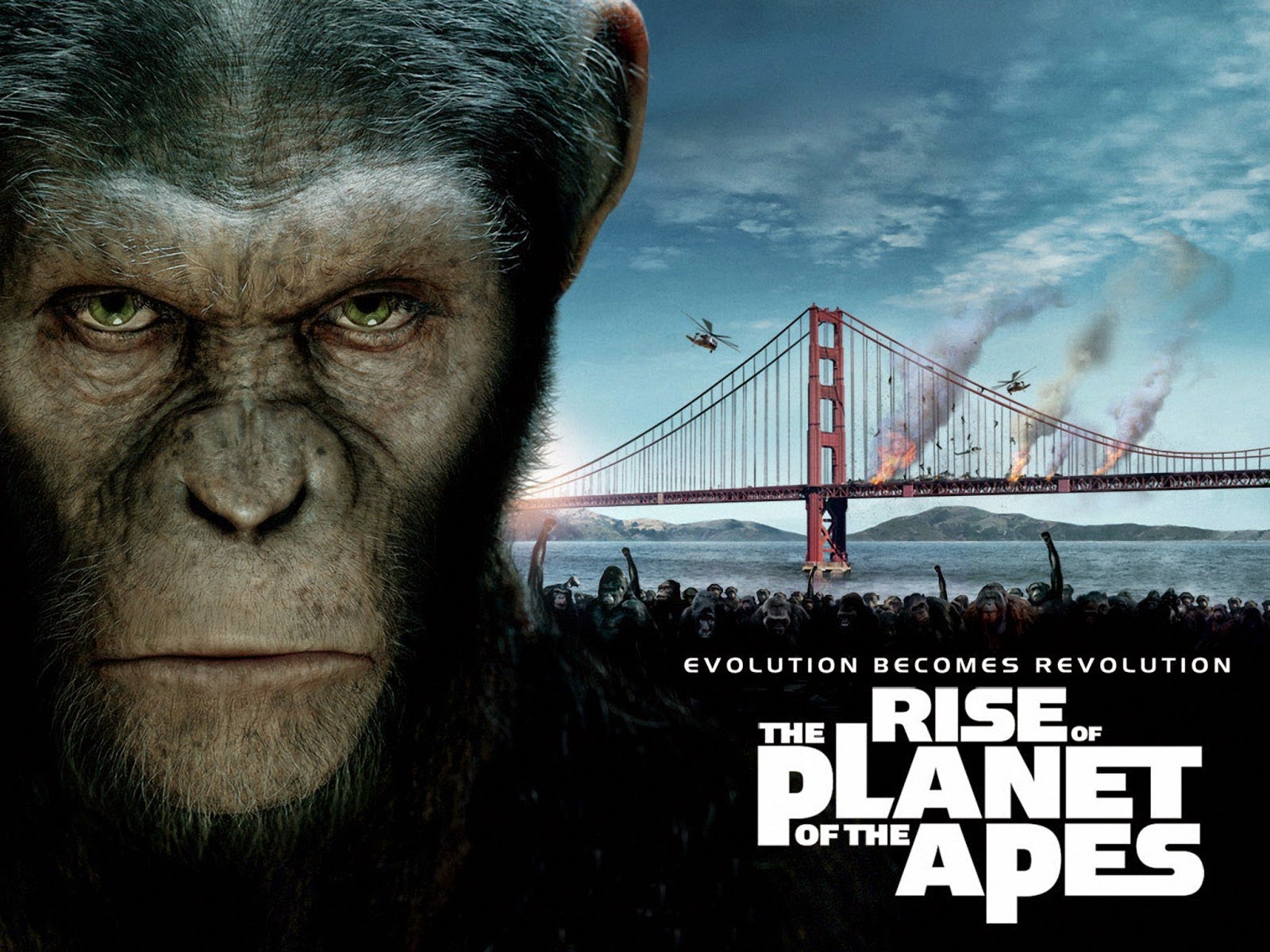 #5 Andy Serkis has a knack for biting off fingers

Will Rodman (James Franco) has administered his drug to his father, Charles (John Lithgow) and has cured his Alzheimer's disease, but only for a short time. It's returning. In one of the first looks at its return, Charles gets into a car that he thinks is his, but is actually his neighbor's. He tries to leave the house but smashes up the car. The neighbor comes out and starts yelling at Charles, pointing his finger at him. Caesar (Andy Serkis) watches from his room, getting riled up. He comes to Charles' rescue, severely beating the neighbor and biting off the finger (a nod to Serkis' performance as Gollum in The Lord of the Rings, I'm sure).

What was so great about this scene was that it was our first look at how powerful Caesar can be. In previous scenes, he's been child-like and innocent, but here, he shows that he can fearsome. And good leader needs to be able to turn that one like flipping a switch. But after the event, Caesar's eyes becomes wide and he is suddenly scared of what he just did. This was so brilliant in that it didn't just make Caesar fierce, but it showed that he can become outraged and unpredictable, but that savagery isn't who he really is. He just lost control. So he starts almost crying on Charles' shoulder as a crowd surrounds, his eyes pretty much saying "What have I done?" 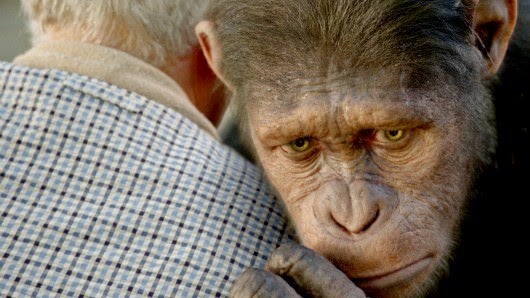 The exact reason why this scene was so powerful was because of Serkis' performance. In a scene that could have easily been one dimensional, he made it three dimensional. He didn't just have the ape attack someone, He had an ape lose control of his anger and then regret what he did. He added so much depth to the scene that made it so brilliant. 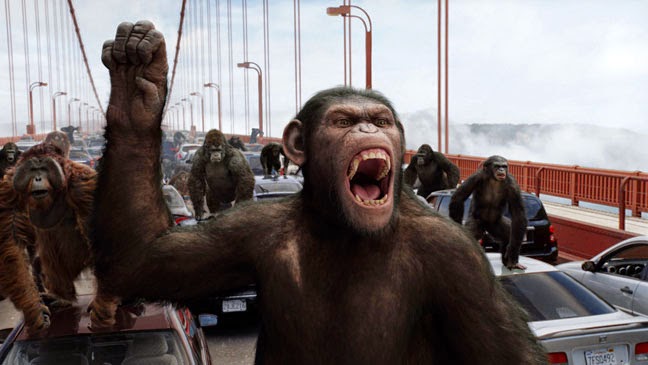 Caesar has infected the other apes with the drug and now they are all intelligent. They break out of the sanctuary and wreck havoc on the city of San Francisco. The apes start overtaking the city, smashing through buildings, climbing up walls, breaking other apes out of the zoo. The police try to fight them but can't. The apes then make it to the Golden Gate Bridge, where an awesome fight between the apes and the police break out. The apes outsmart the humans and overtake them on their way to the Muir Woods.

Everything in this scene works. The whole movie has been building up to the apes rising up against the humans, and we finally see it. The destruction is directed perfectly and cinematically it looks beautiful. The music enhances the scene with this feeling of revolution, which is what this scene is supposed to be about. The fight on the Golden Gate Bridge is even better, as it incorporates a lot of horror elements as opposed to straight up action. It uses suspense by having the scene covered in fog, so it's difficult to who is where, and it works really well.

The part when the apes flipped the bus over and used it as a shield from the bullets was so well done as well. This entire scene was perfectly coordinated and choreographed to make this seemingly haphazard plan of Caesar's come together in the end. It's just a perfect pay-off to what the movie was building up to his whole time.

After Caesar is first put into the sanctuary and is locked up in his cage, he takes a piece of chalk and draws the star symbol from his room as he cries. I couldn't find a picture of that scene but I did find a picture of the symbol from his window. The scene almost brought me to tears when I watched it (I never cry during movies). It is just such a powerful and emotionally charged moment in the film that I think is the saddest part of this very sad movie. It is how I would imagine a child going off to college and on his first day missing home. But then he becomes acclimated to the sanctuary and even though he is abused, he doesn't miss home nearly as much. I honestly believe Andy Serkis should have received an Oscar nomination for his performance in this movie, and the biggest reason why I think that is this scene. When Will is leaving Caesar at the sanctuary and he has to say goodbye, Serkis gives an unbelievable performance. There's Caesar sudden realization that he is being left there and he changes his emotions so fast. He starts out being a little bit sad, then angry, then screaming sad/angry. He starts breathing heavily, banging his fist on the glass and screaming out. It's absolutely incredible, and Serkis made this goodbye scene so beautiful and saddening. It's devastating and Serkis makes you feel that.

Before I get to my number one, I'll list off some honorable mentions. Ape Gone Wild: As Will is talking to the board members to get funding for his project, his show-ape goes wild to protect her secret child. She runs all over the building, destroying things and causing chaos. Ultimately, it ends with Will's project being terminated. Caesar Growing Montage: There's a montage of Caesar growing up, becoming stronger and more intelligent as Will narrates by explaining how the drug has caused his intelligence to expand exponentially. The scene is well edited as well as directed, and gives us a good look at Caesar's childhood. Caesar Is Home: At the very end of the film, Caesar is the king of the apes. Will asks Caesar to come back home. Caesar then whispers in Will's ear "Caesar is home". It shows that Caesar can actually speak sentences, and it finishes the movie powerfully. 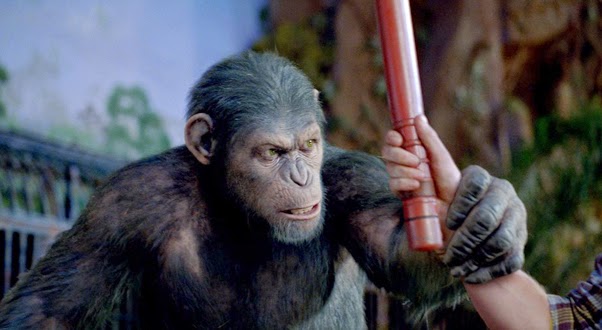 Caesar has broken out of his cage and is showing his dominance over the other apes. Dodge Landon (Tom Felton), who has been abusing Caesar for some time now, tries to shock Caesar and bring him back to his cage. Caesar catches Dodge's hand, to which Dodge says "Get your paws off me, you damn dirty ape", a throw back to the original movie of course. In one of the most intense and unexpected moments I've seen on screen, Caesar rises up and screams "NOO!!!" There is complete silence after. There are these different shots of both the humans and the apes in shock that Caesar can talk. Caesar then smacks Dodge and this heavy music starts playing. Caesar starts walking around, holding the taser up in the air, screaming "NO! NO!". He then breaks the apes loose and the revolution begins.

No one knew that Caesar was going to speak in this movie, so when it happened, I and a lot of other people jumped in my seat at the theater. The hair on my neck stood up and it still does every time I see this movie. The scene was shot and edited so perfectly that you can feel the tension in the scene rising up to that one moment. It is my favorite part of the movie and it still gives me chills each time I see it.

Those were my five favorite moments from Rise of the Planet of the Apes. What do you think? Do you agree with my list? Do you disagree? Leave your thoughts in the comments section below.