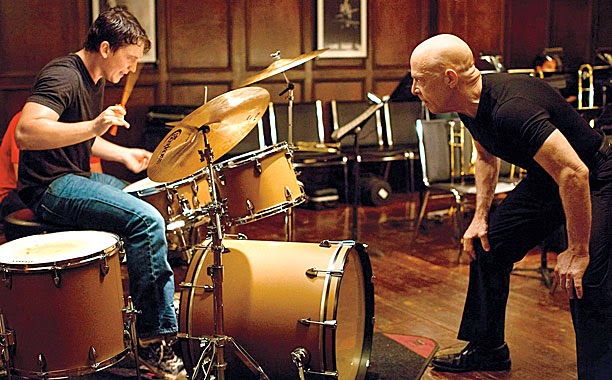 Hey, this is Rob from the Wrapping Up 2014 articles (read those here). Nate asked me to do a review for a film he hasn't gotten a chance to see. The movie is Whiplash and it stars Miles Teller and, who I think is the best supporting actor of the year, J.K. Simmons. It is also is directed by a young director in Damien Chazelle, who I think deserves a nomination for best director, but it's unlikely. However, credit is due for this man, as I thought he did a fantastic job with material that wasn't easy to direct. A quick synopsis for the movie is that it's about a boy named Andrew Newman (Teller) who is an up-incoming drummer at his college. While there, he is taken under the wing of jazz conductor Terrence Fletcher (Simmons). However, Fletcher proves to be a cancer to Andrew's self-esteem and leads him down a depressing path, but also teaches him about working hard and not limiting yourself.


Wow, what a movie! From beginning to end this movie had my full attention (which is hard to do) and with some time, it could get a mention in my favorite movies of all time. This movie delivers a strong narrative and a very impressive script. This movie, however, wouldn't be the same if it wasn't for the performances. Teller and Simmons especially are brilliant and their back and forth was riveting to watch. I'm looking forward to watching their careers from here on out.

Another thing about this movie is the drumming. Going in I didn't know that Miles Teller actually had to learn all these songs. It was pure brilliance and the ending will leave you speechless! My only flaw with the movie is that there's one story line that doesn't end the way I wanted it too, but it didn't take away from this amazing movie.

What do you think? Have you seen Whiplash? Did you like it? Leave your thoughts in the comments section below.