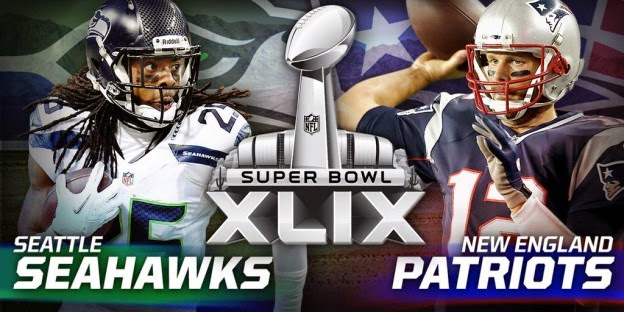 Last night was a big night for sports fans, as it was the Super Bowl between the New England Patriots and the Seattle Seahawks, and the Pats took the trophy home! (Hey, I'm from Boston, alright?) But this is a movie blog, and there actually is a connection here. The Super Bowl is infamous for airing small spots for movies for huge chunks of money. This year it was about $4 million dollars for a 30 second spot. So in this article, we're going to take some of the spots from last night and review them. Let's get started.

Anyone who has been reading my blog for a while now knows how excited I am for this film, and how much of a Marvel fan I am. However, I didn't really care for this spot. It showed us nothing new. It was all rehashed footage from previous trailers. They have thirty seconds and they could have shown some really cool new footage to get us even more excited for the film, but I feel like it was a wasted opportunity. Now, I know the audience they were appealing to hasn't necessarily seen the previous trailers before, but I mean, come on. It's thirty seconds. They could have added some new shots for fans who were looking forward to this trailer and had already seen the trailer. It added nothing new and while it may have served its purpose in some regards, for bigger fans, I think it was a missed opportunity.

I am really looking forward to this film. I think Chris Pratt is an awesome guy and I'm a fan of the franchise. I thought the first trailer they put out a few months ago was great so I'm interested in every bit of footage I get to see for this film. I loved this spot. It did what Avengers missed out on and it showed us some new footage. It had a lot of shots from the first trailer, yes, but it expanded on scenes shown and gave us some new ones. Not only was it engaging for people who hadn't even heard of this film before, but it was interesting for me, as it gave me something new for me to get excited about. I thought it was great.

I have been dying to see this movie for a while now. I really like Matthew Vaughn as a director, the cast is fantastic and everything I've seen for this movie has been superb. I liked this spot a lot. Now, some people may say "Well Nate, this spot didn't show any new footage and you were just criticizing Avengers for not showing new footage!" Point taken, but it's different in this case. Kingsman comes out this month, in February. It's already had a few trailers and plenty of spots. It doesn't really need to show more footage, nor do I feel a need to see any more. What was good about this trailer that it focused more on the positive buzz it was getting rather than just showing us the same cool shots we've been getting in the previous trailers. For a film that's going to open soon, this was a smart decision for a Super Bowl trailer.

While everyone has been singing praises about this movie's trailer, I personally did not care for it. That trailer put this film high on some people's most anticipated lists for this year; it didn't even crack the top 10 for me. However, this spot got me a little bit more interested in this film. Granted, I'm still not very interested, but it pushed it a little bit further. Unless they come out with another trailer that completely blows me away, I probably won't go see this movie. It just doesn't capture my interest.

I've been hesitant about this film. The trailer came out and I thought it lent itself to having a lot of potential, but an easy margin for error. So while the trailer didn't really blow me away, I'm still very much interested in the film. I'm a big fan of the first two Terminator films. I thought this spot was great. It did a lot of things right. It showed new footage, making it more interesting for me and I think it made the very smart decision of being Arnold-focused. For its audience, Arnold Schwarzenegger is a big selling point, and for a Super Bowl spot, emphasizing on him was a smart decision. This raises my enthusiasm for the movie. It just liked the feeling of the spot.

The trailer for this film came out a few days ago and I thought it was hilarious. So I was interested in seeing the Super Bowl spot for this. I thought it was great. I really liked that they specialized it for the Super Bowl by having Tom Brady in it, rather than just re-edit a bunch of footage from the trailer. It made it stand out and it fit for the type of film that it was. I thought this spot was very well done and really funny.

I haven't seen any of the previous Fast and Furious movies, but I am looking forward to this one. I really liked the trailer and I have been wanting to get into this franchise for a while now. I think this TV spot may be my favorite of them all. It had some really cool action sequences with a lot of stuff that was not in the trailer. That car crash through the buildings at the end was breathtaking and I thought it did exactly what a Super Bowl trailer should... it gave us a taste of the film with some fantastic looking action scenes that was aimed perfectly for the audience watching. I thought it was great!

What do you think? What was your favorite movie spot? Which are you most looking forward to? Leave your thoughts in the comments section below.