How many sh*tty Adam Sandler movies need to be turned out before studios finally learn to stay the hell away from him? Yes it's a bit harsh but it's true. There has only been like two or three films Sandler has been in that I have actually liked. I still think he deserved an Oscar nomination for his role in Reign Over Me, but other than that he has been putting out stinkbomb after stinkbomb. When I first heard the premise for Pixels, I was optimistic. It had an interesting concept and while I thought it could be good, a voice in the back of my head was telling me that this was going to be just another crap Sandler film. I thought it could be good with the talents of Peter Dinklage, Josh Gad and Kevin James, but we've seen Sandler work in groups before-- and that was called Grown Ups 2.

This is just not a good trailer. The only thing I found interesting was how big budget it seems. From what I've researched, the budget was around $110 million, which is a lot of money to be given to guy like Sandler who has yet to put out a good movie in a long time. Some of spectacle in the destruction of the cities looked interesting, but if I just wanted to see cities being destroyed, I would watch Transformers. The one-liners were bad, the jokes were off and every single attempt at humor was a miss. Maybe this is just a bad trailer but it did not work for me. 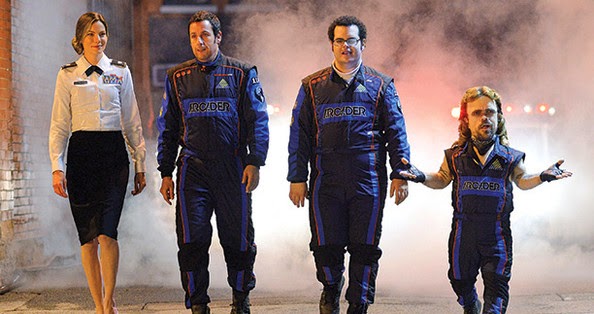 What do you think? Did you like the trailer? Are you looking forward to Pixels? Leave your thoughts in the comments section below.