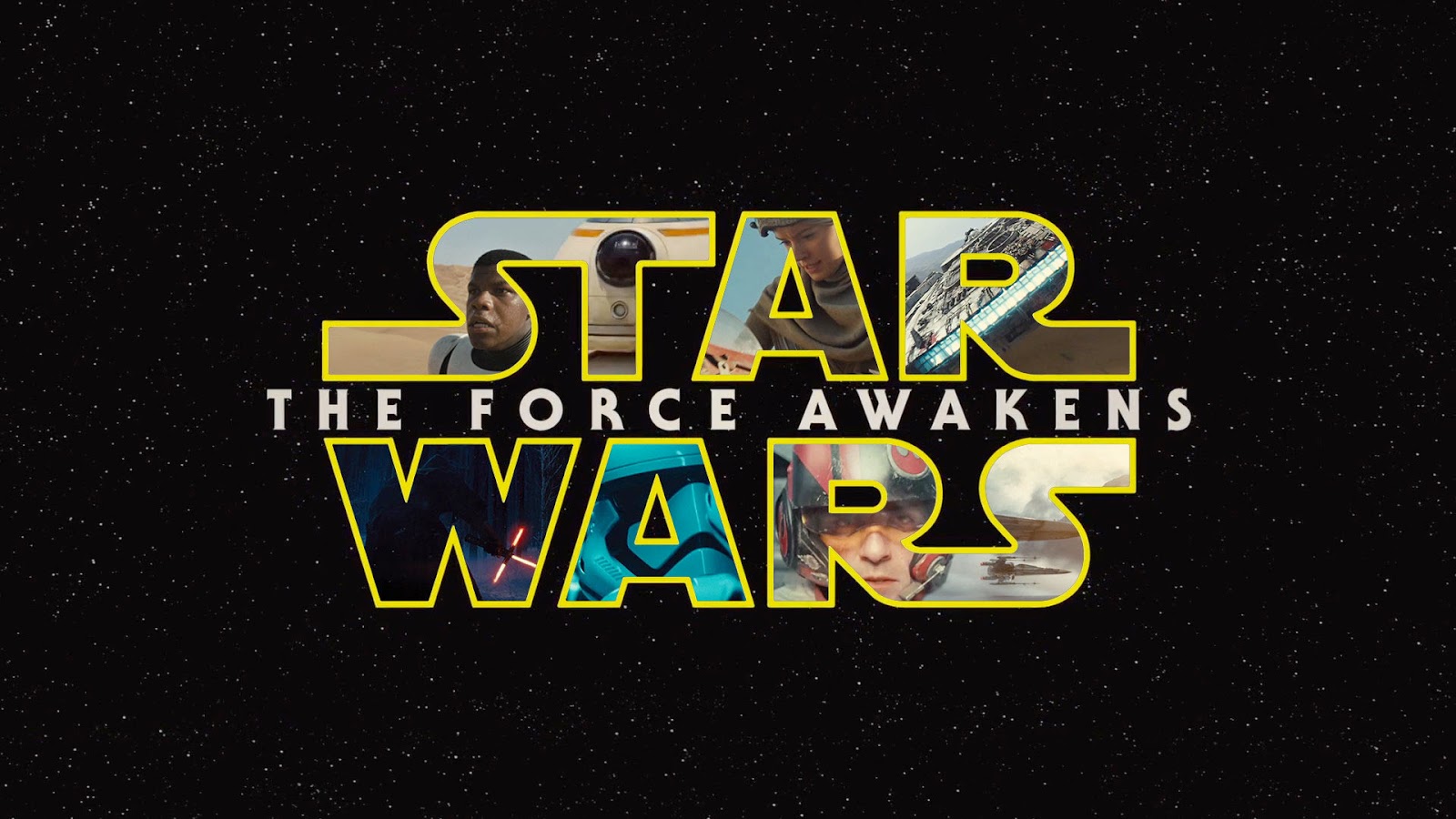 Yesterday saw the release of the second trailer for Star Wars Episode VII: The Force Awakens, which you can see here. I thought the trailer was fantastic; ten times better than the teaser we got back in December. However, it was hard to tell what exactly was going on. In this article, I will be breaking down the trailer shot-for-shot and analyzing it, predicting how each shot may fit into the film. So, let's get started. 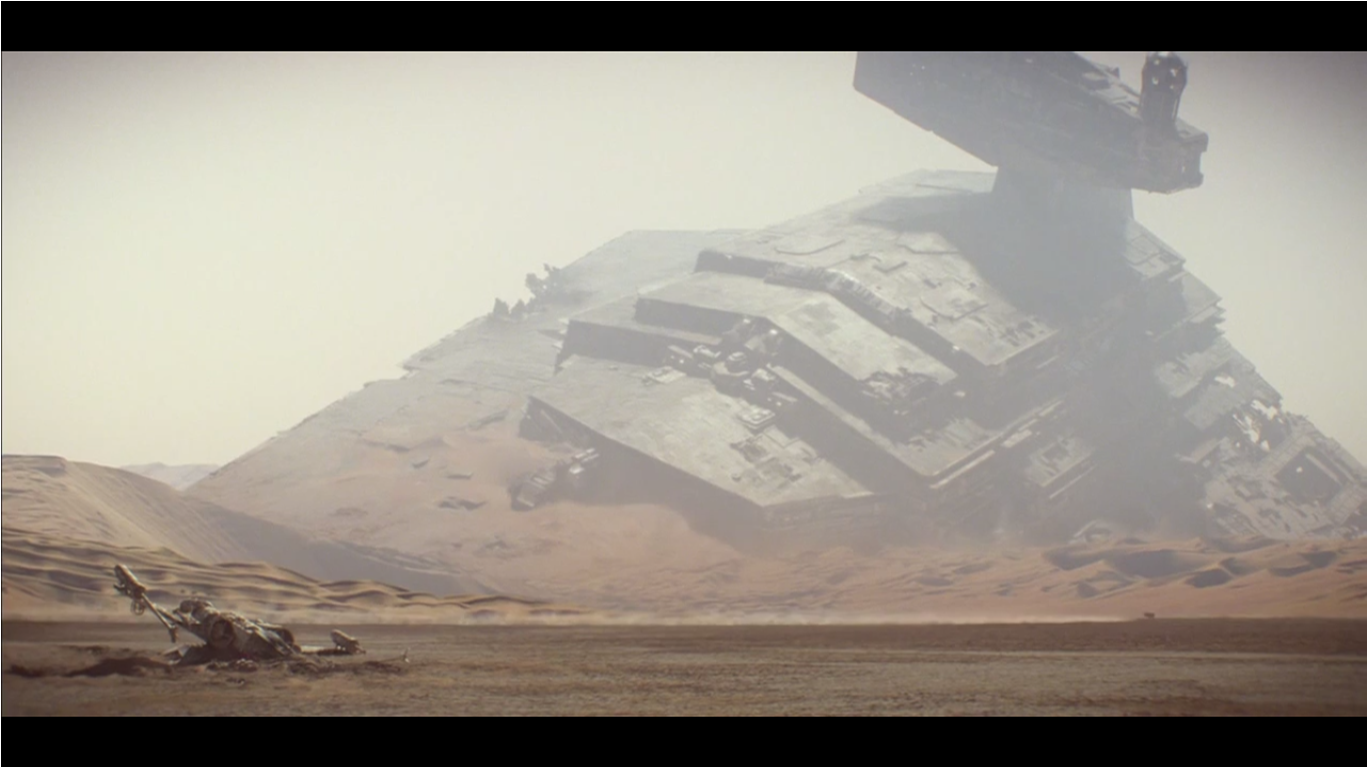 At Star Wars Celebration (where this trailer debuted), it was confirmed that the desert planet featured in both trailers is not Tatooine, but rather a new planet called Jakku. According to the filmmakers, this planet is graveyard for fallen ships, which we see an abundance of in this shot. 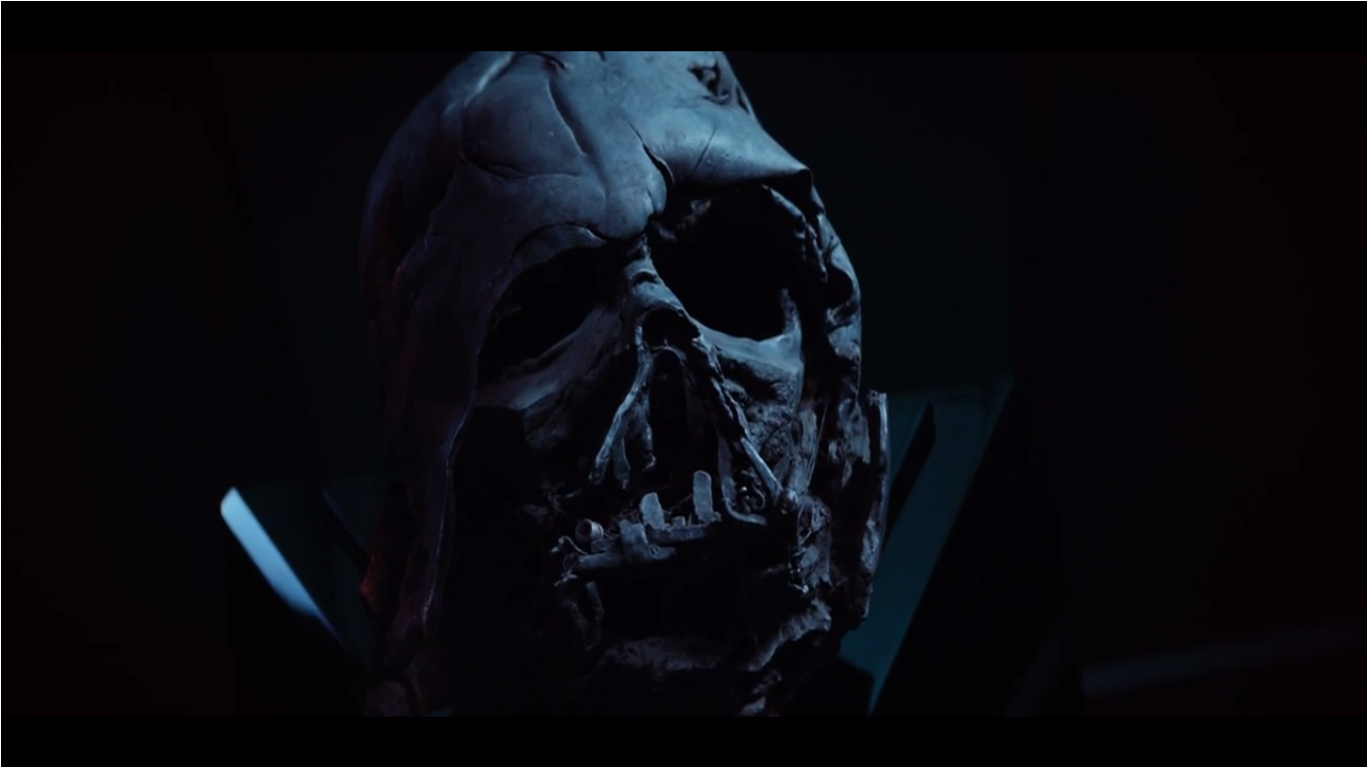 While this is an awesome shot, I wonder what significance it holds for the film, if any at all. Some have speculated that maybe Darth Vader is really alive, but I don't think that's true. We have bigger and newer things to attend to, and I think going back to Vader would be a mistake. I think this could simply be a trophy for someone, or just something shown for a split second in the movie. 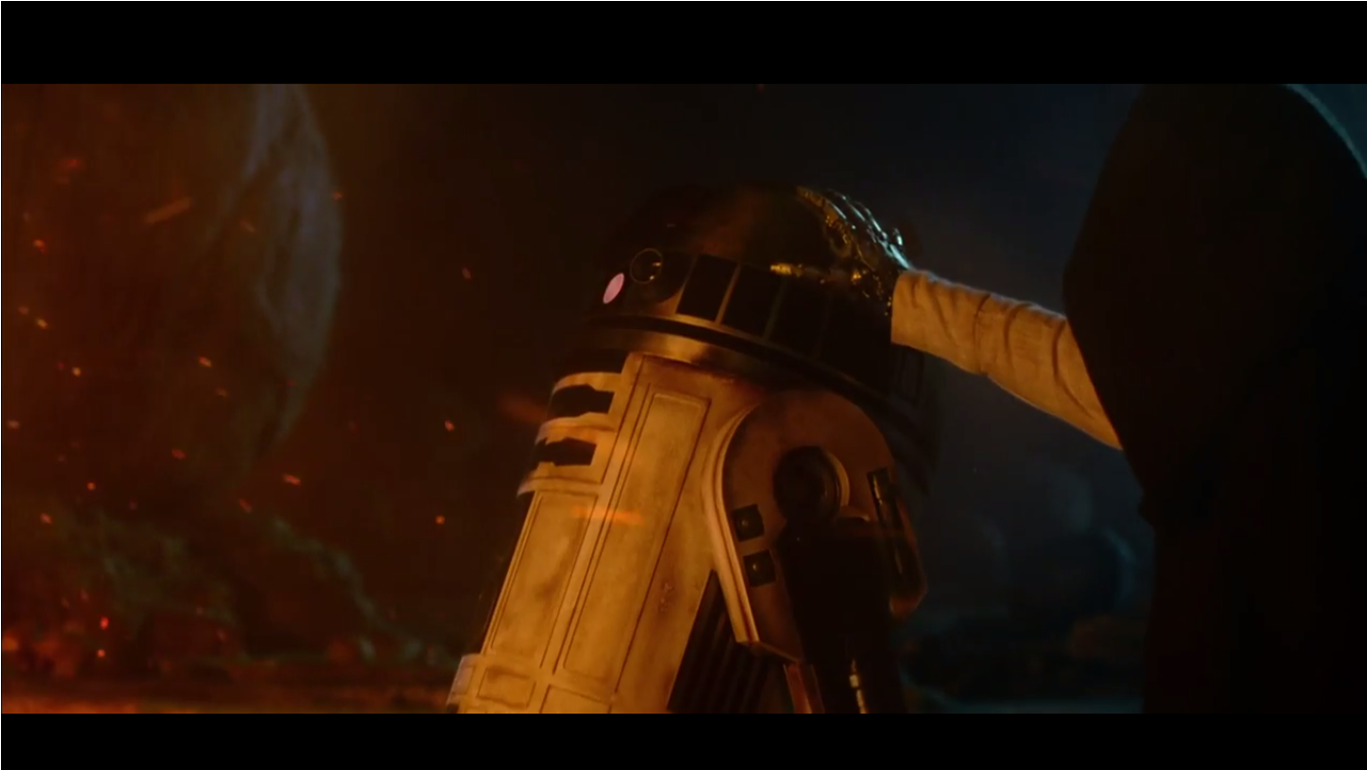 At this point in the narration, which was taken from Return of the Jedi, Luke speaks about himself. Based on that and the robotic hand, I think it's safe to say this is Mark Hamill's Luke Skywalker in the shot. I like the design of the updated hand. 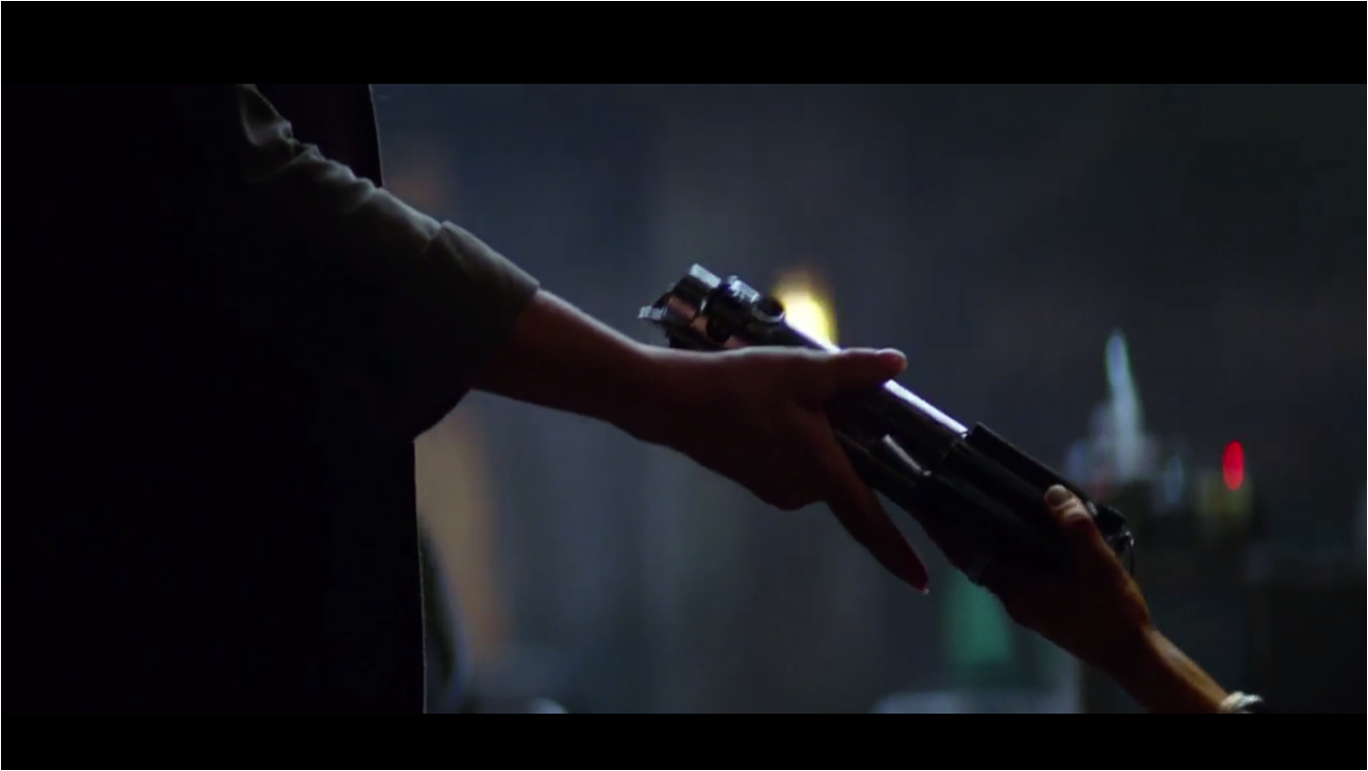 This looks like it could be one of Luke's children, but which actress is it? I think it could very well be Daisy Ridley, or maybe someone we don't know about yet. 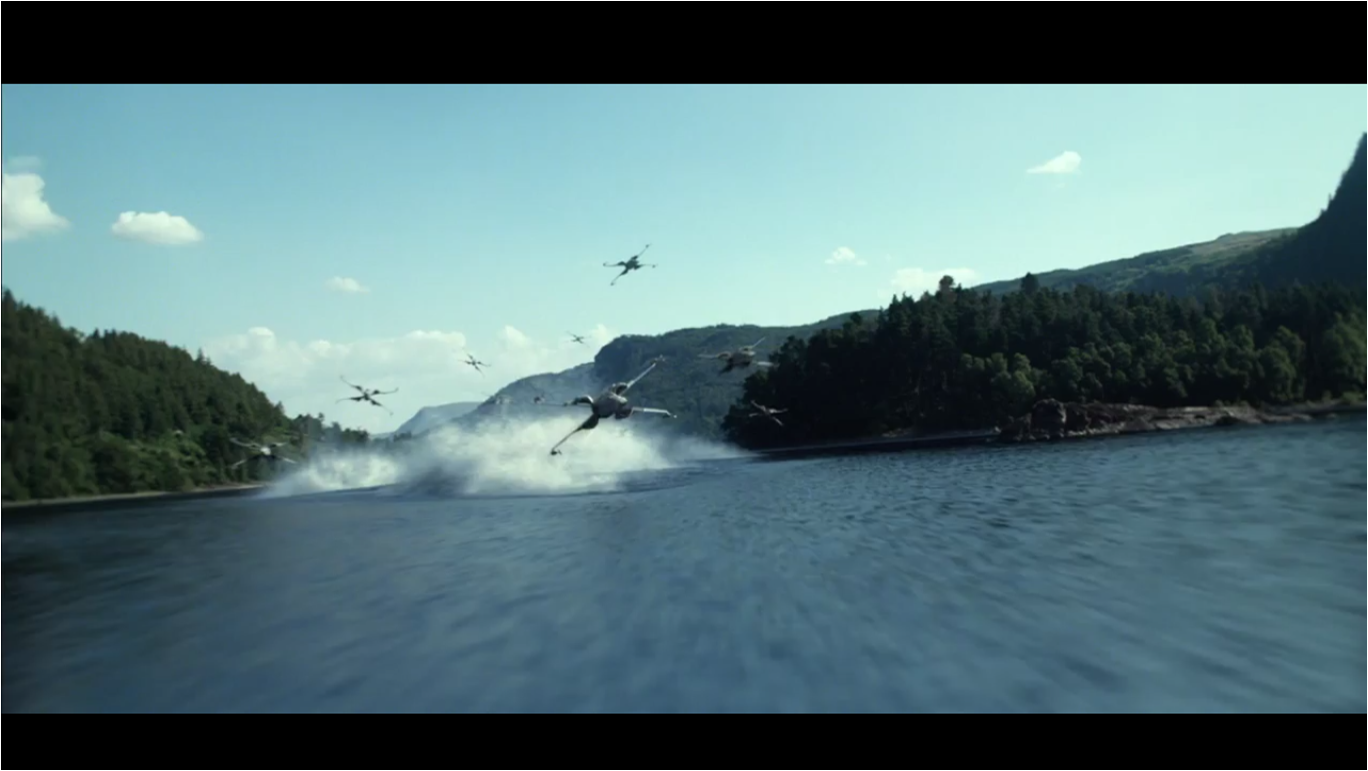 We saw this shot in the previous trailer, and I think it looks really good. 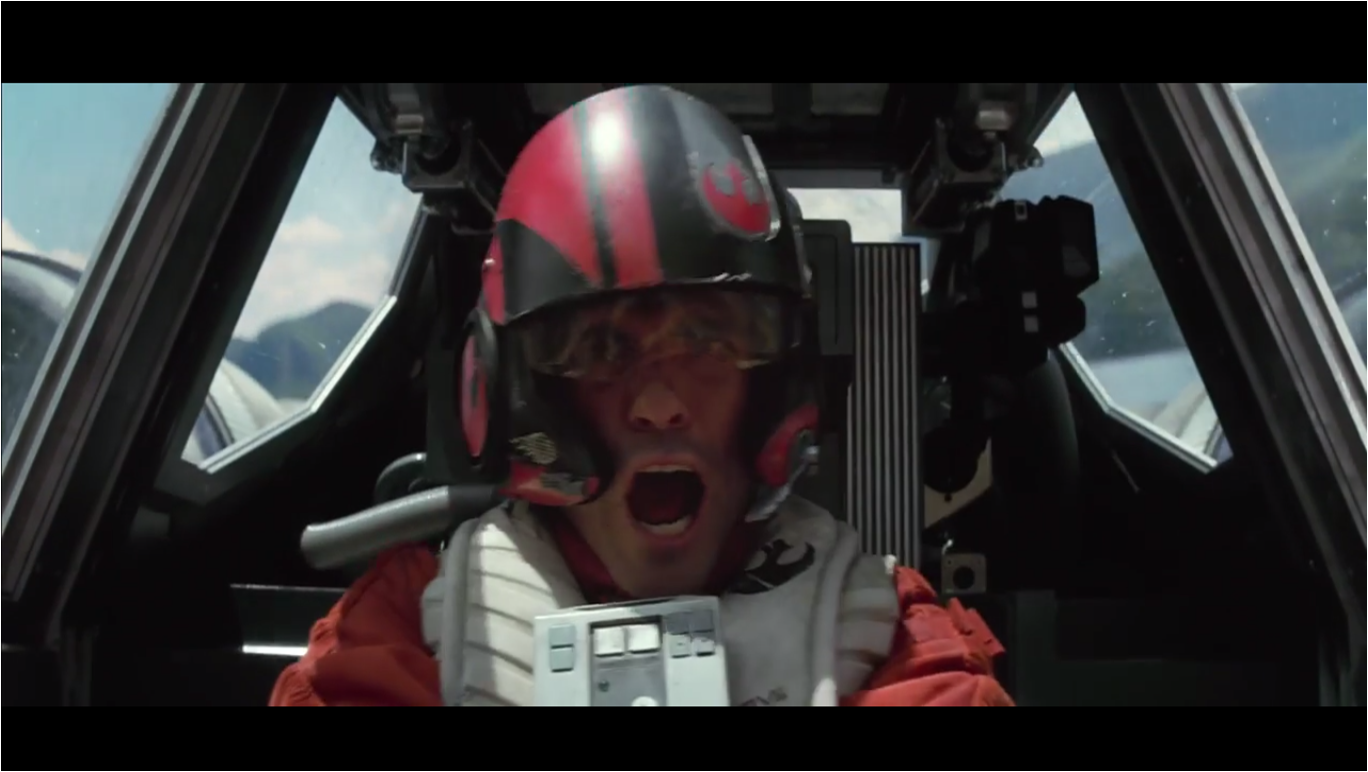 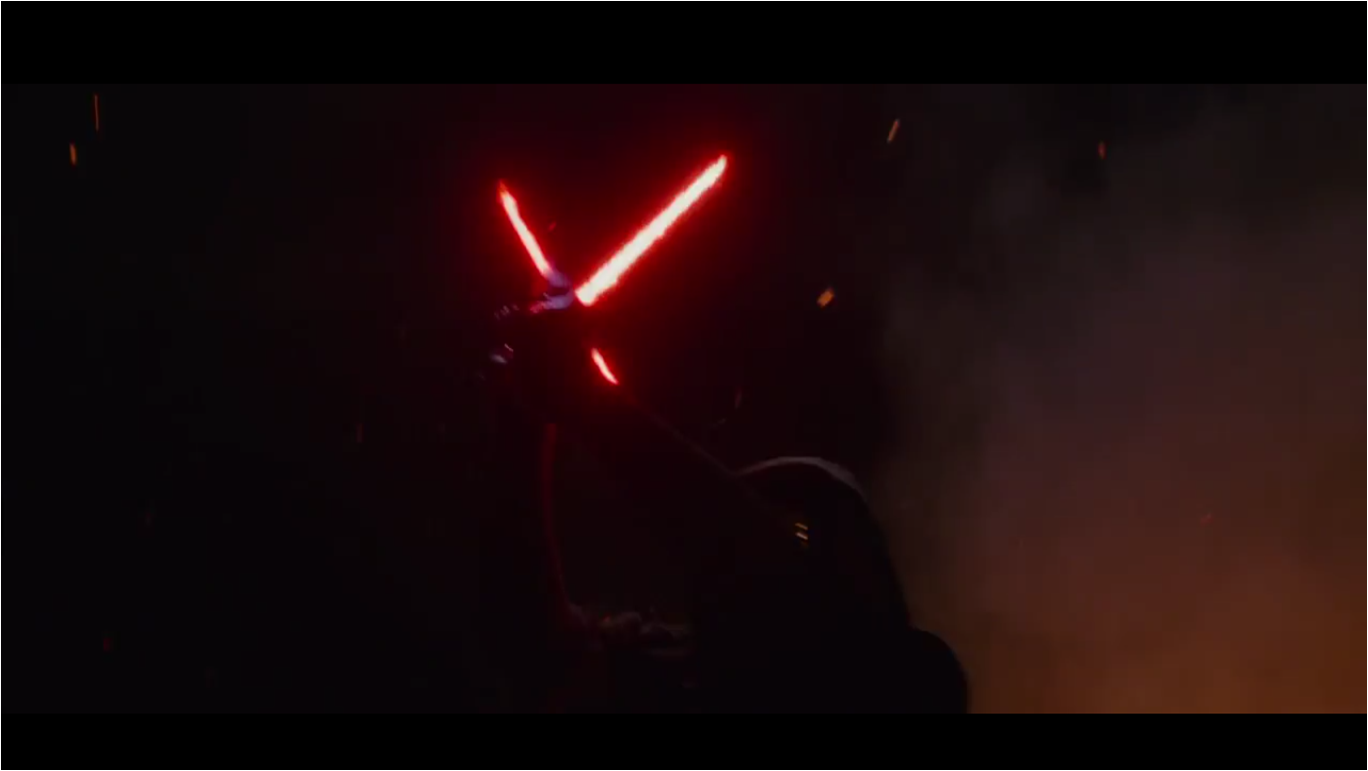 Here's another look at, presumably, the film's villain Kylo Ren. We still don't know who is playing him. A lot of people are saying it is Adam Driver, but I think there's a very good chance it could be Andy Serkis, based on the fact that he did such a menacing narration in the first trailer. 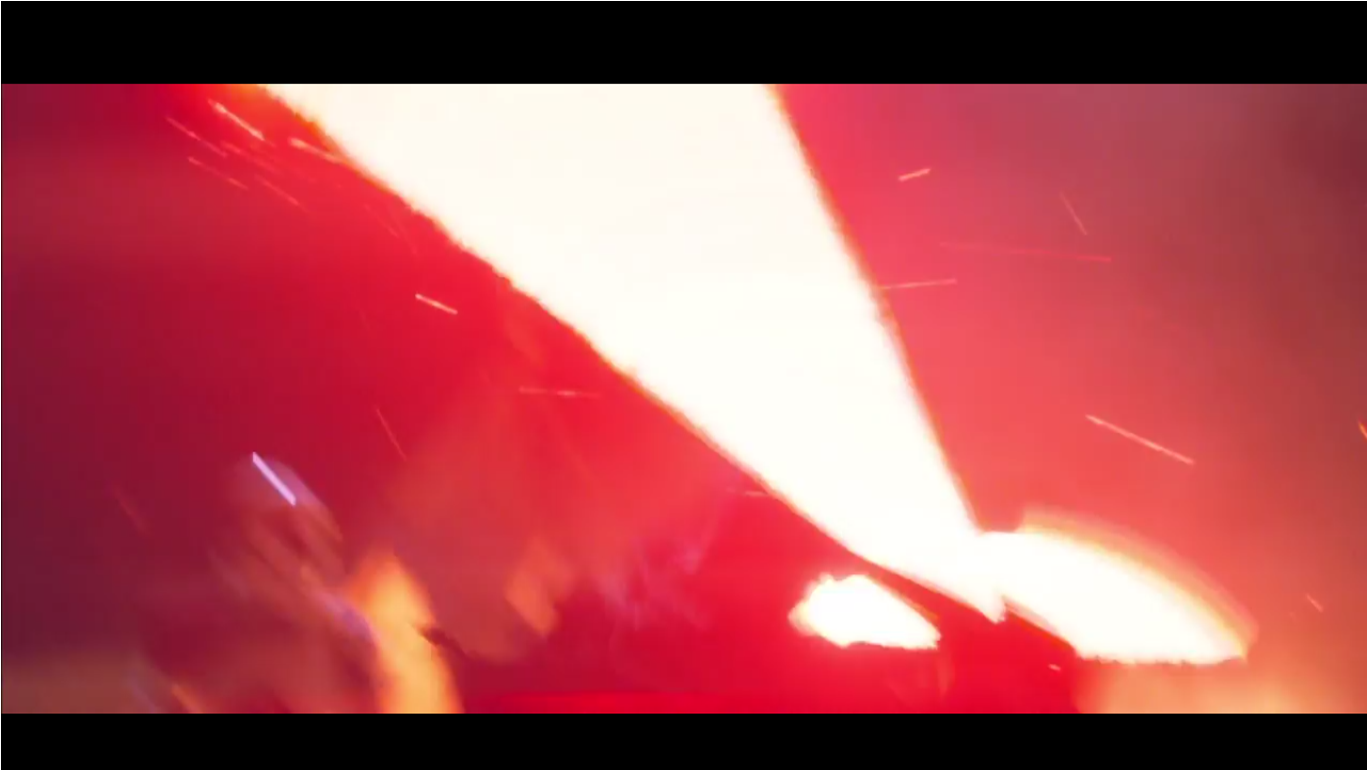 Damn, I would not want to be on the receiving end of this lightsaber attack. 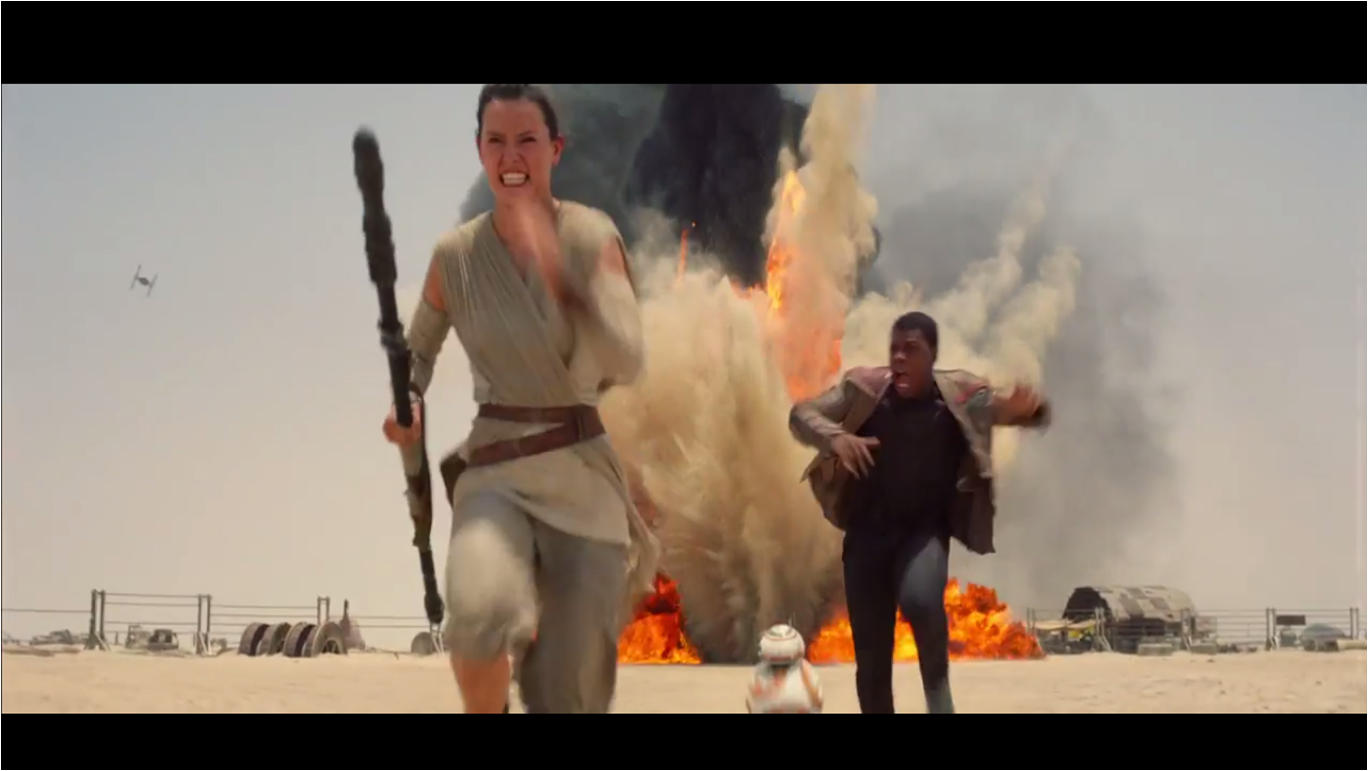 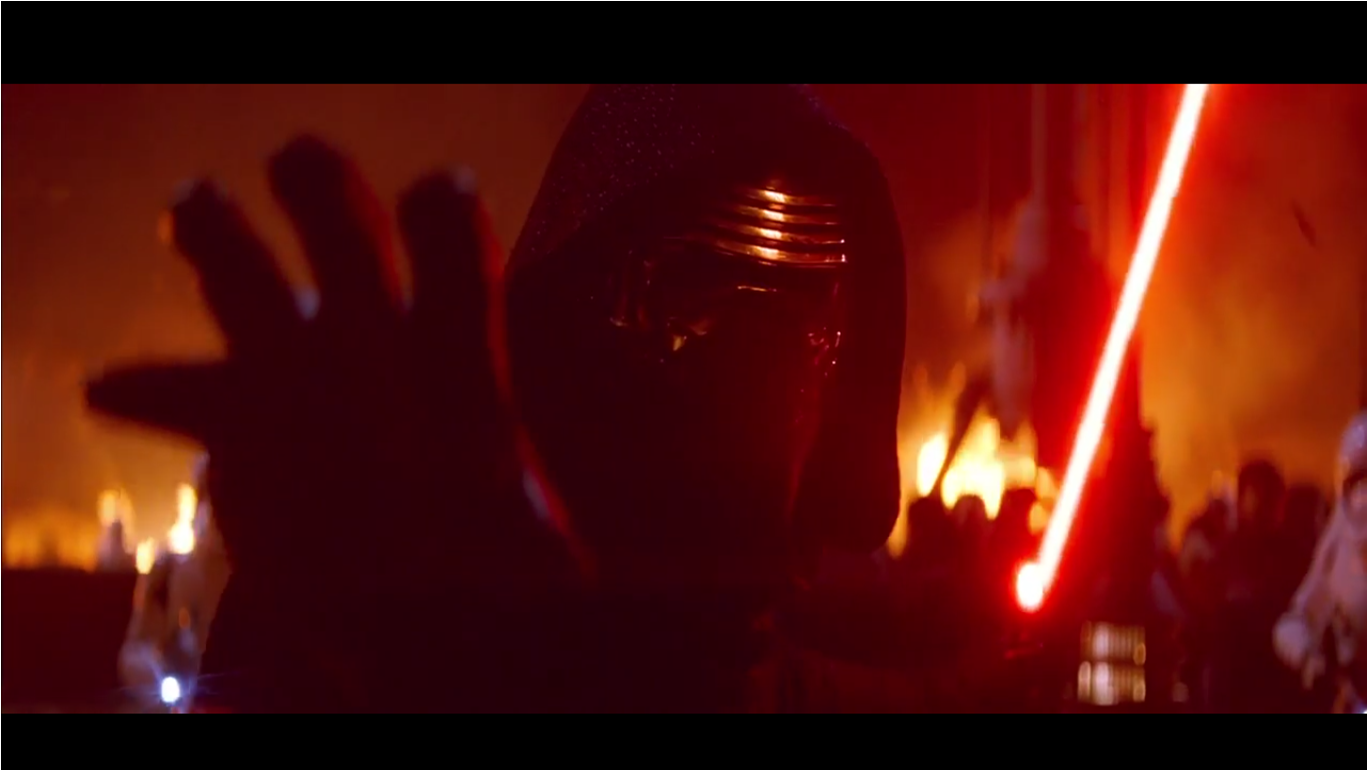 I love the design of Kylo Ren's mask. He looks really menacing. 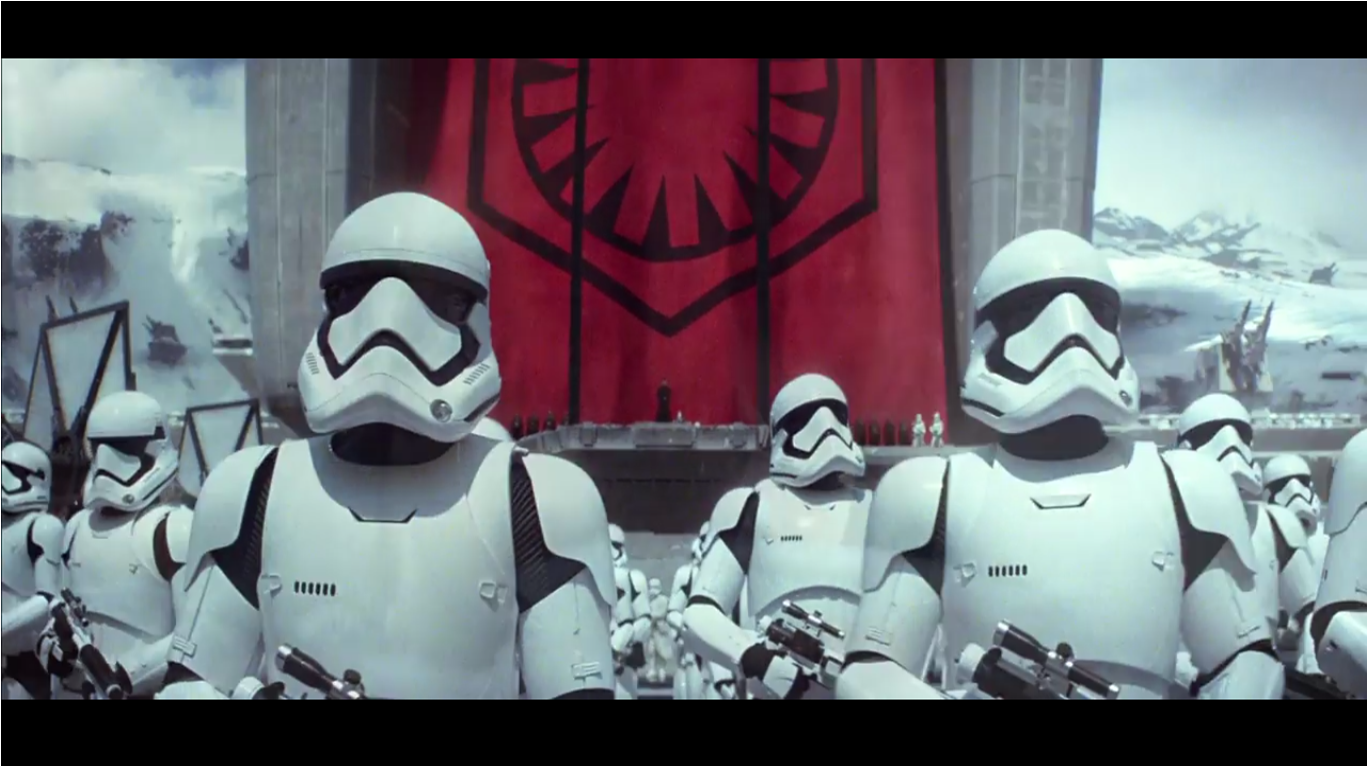 So these new Stormtroopers are under new command, as evident by the flag in the background. So is this a new Empire, or is there something else rising up to power. The black figure in the back could very well be Kylo Ren, or maybe someone else. Could there be multiple villains in this movie? 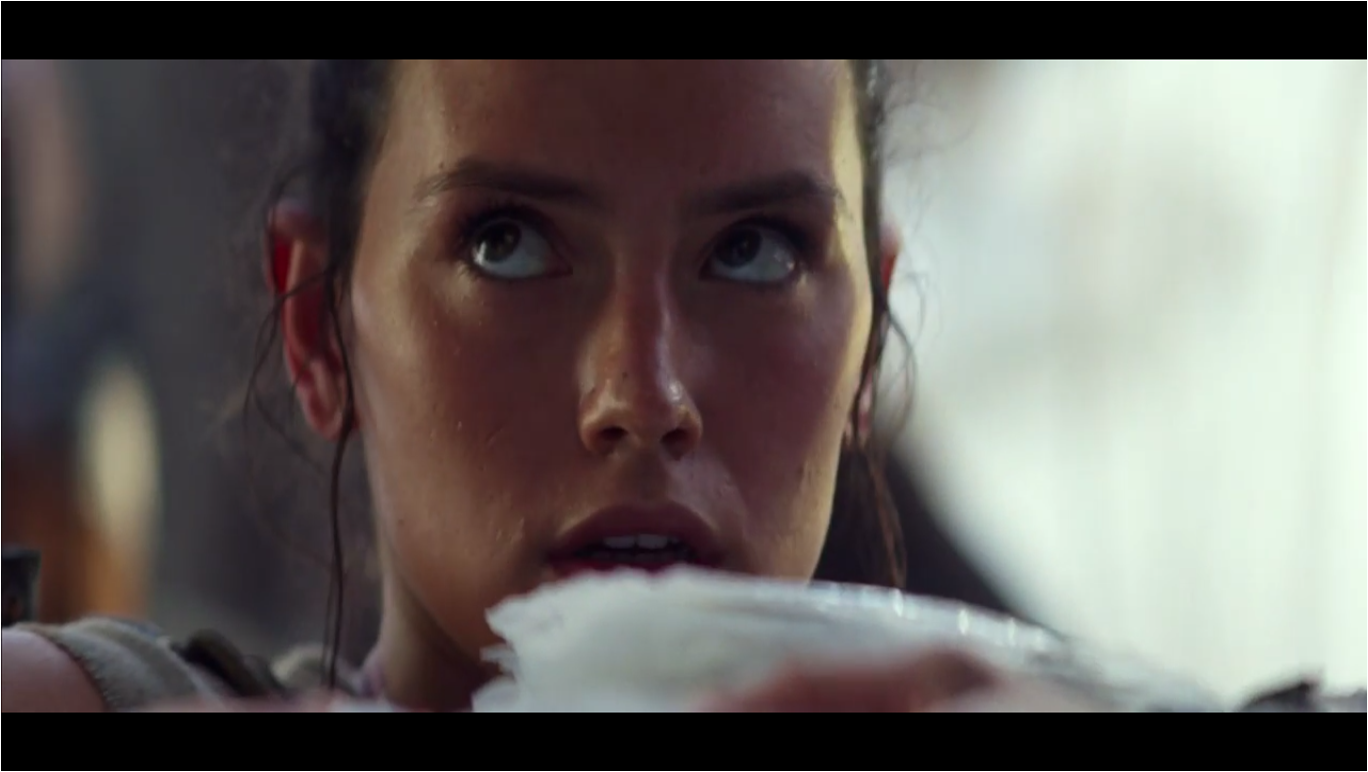 Another shot of Daisy Ridley. 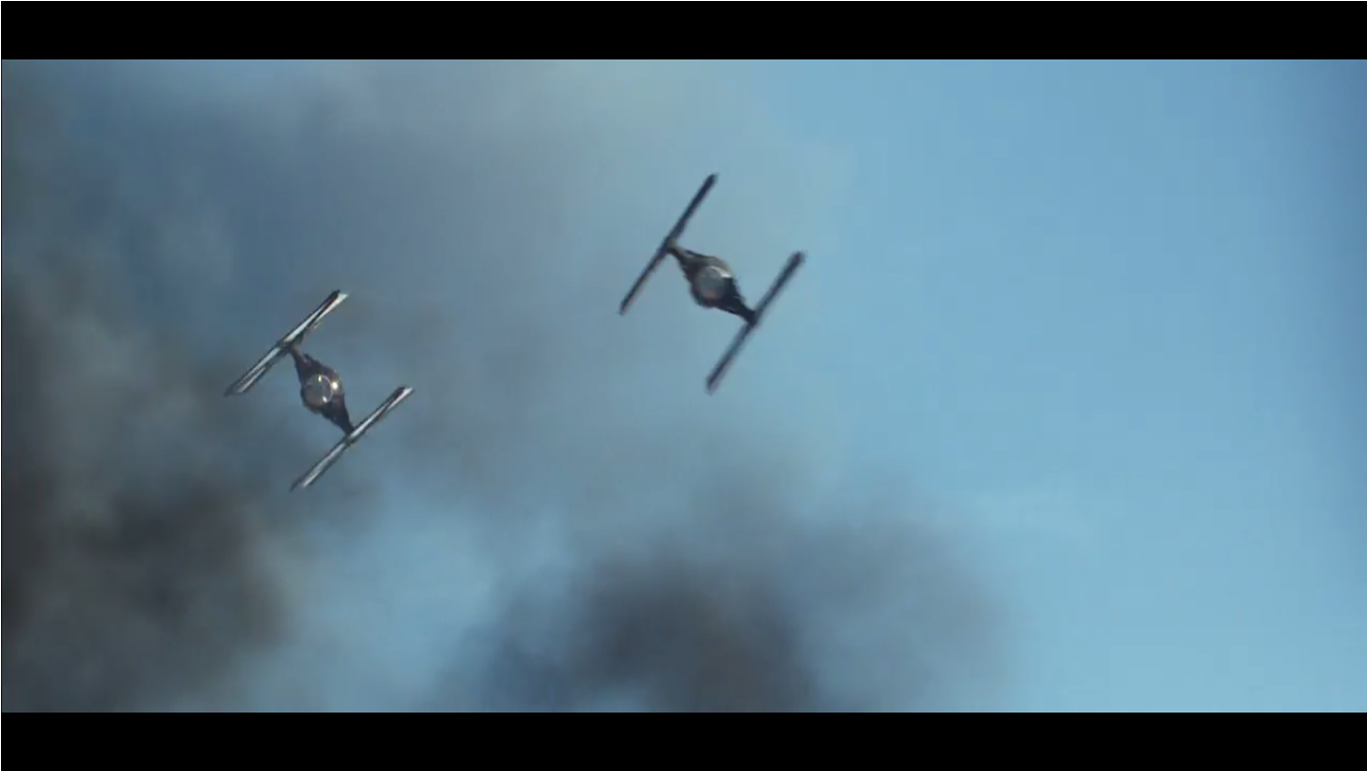 Something that really stood out to be about this trailer is how much is feels like Star Wars. It doesn't feel like some movie that is just under the brand name, but everything-- from the visuals to the music- feels like classic, traditional Star Wars. Like director J.J. Abrams took everything that made Star Wars, Star Wars and, at least put it into this trailer, if not the entire film. 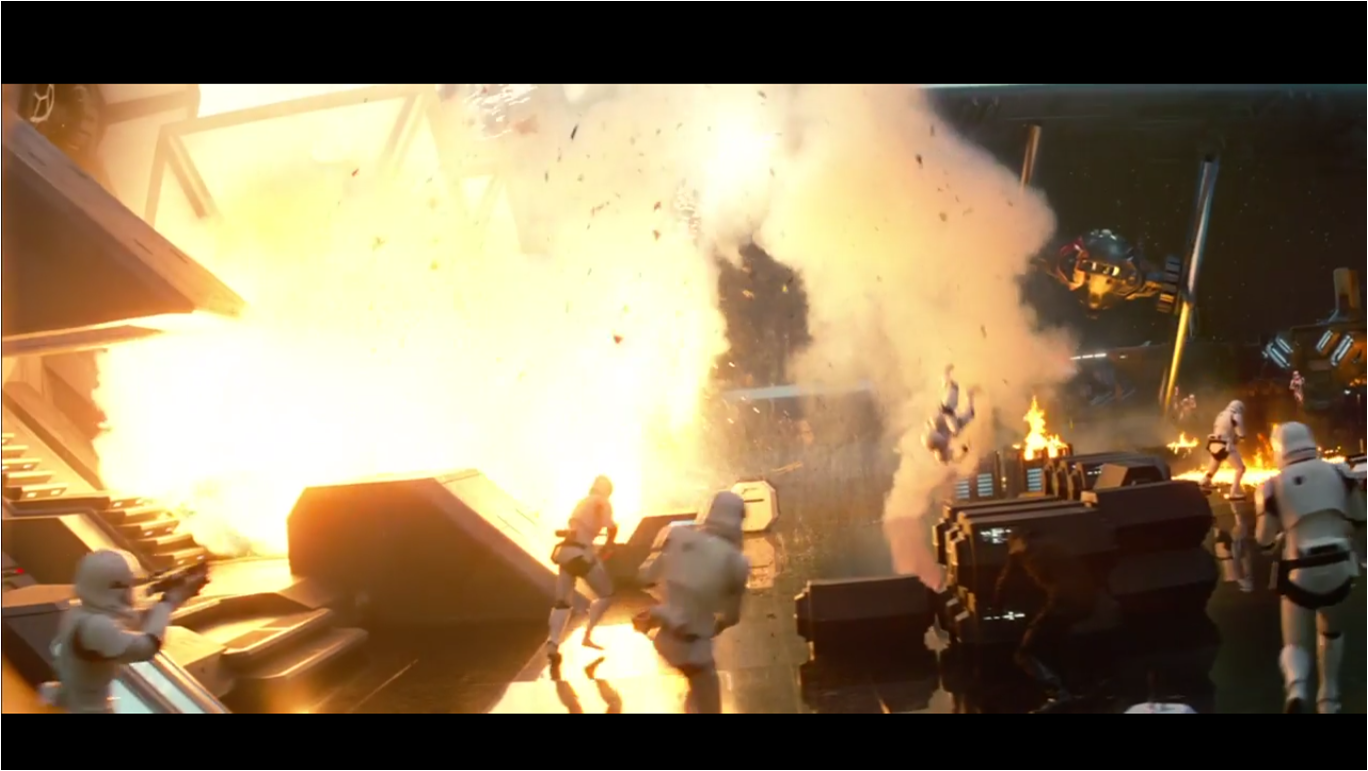 This looks like an awesome shot of a fight in a hanger bay. This was the first moment in the trailer that I really felt like this is a true Star Wars movie. It looks like a lot of practical effects as opposed to overblown CGI and the design of the hanger bay is very reminiscent of A New Hope.

Okay, why is John Boyega always out of breath every time we see him? 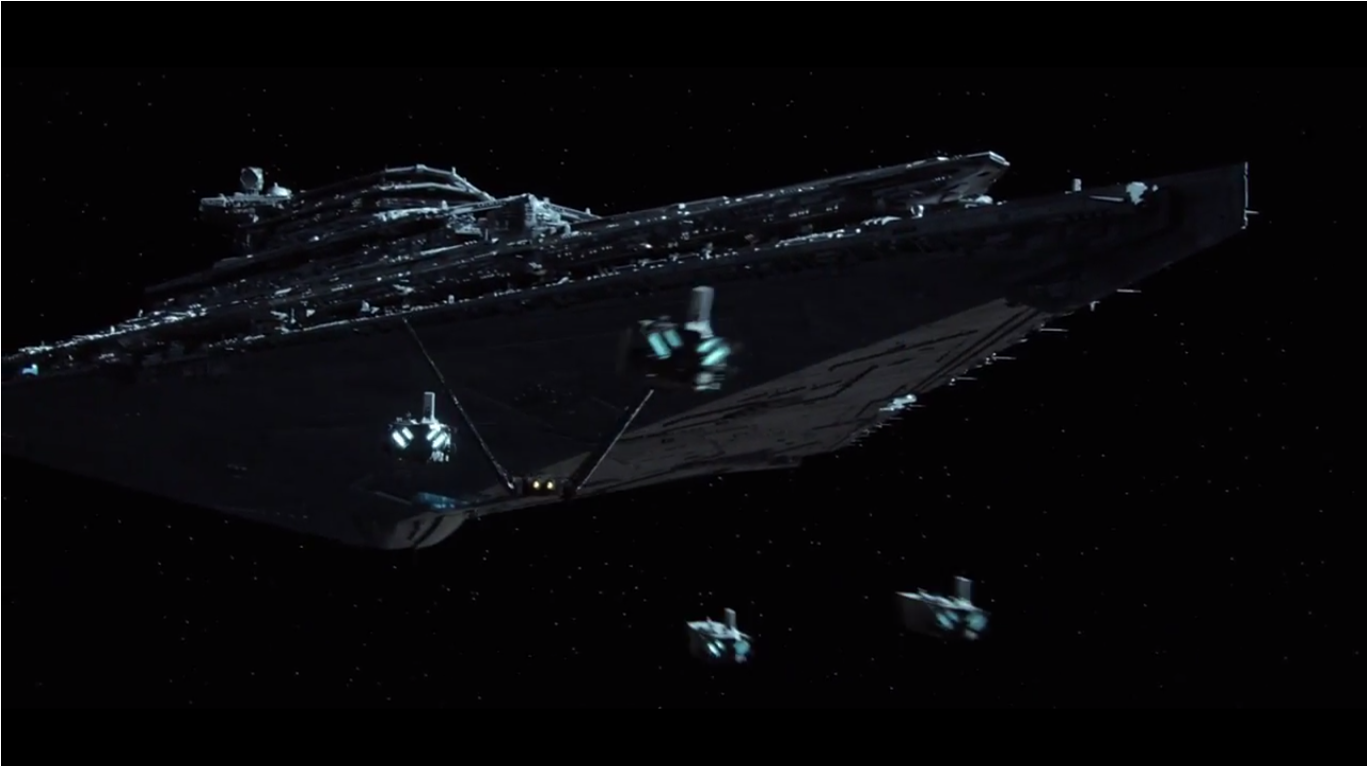 Here's another example of this looking like classic Star Wars, just updated. It feels like they went back to miniatures and a backdrop, but they made it look smoother. The design is impeccable. 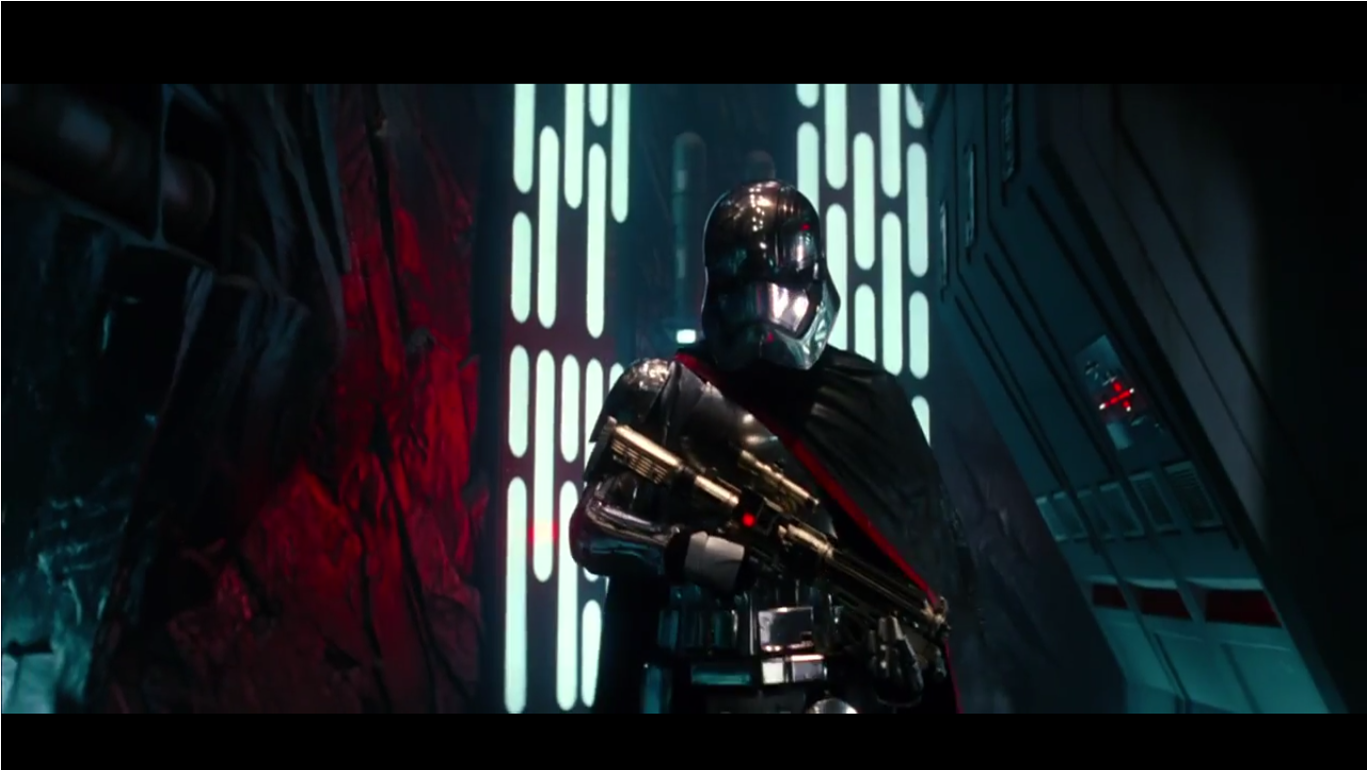 This type of trooper is apparently called a Chrometrooper, and I think he looks great. He's slick and deadly looking. As to what differentiates a Chrometrooper from a regular Stormtrooper, I'm not sure exactly. 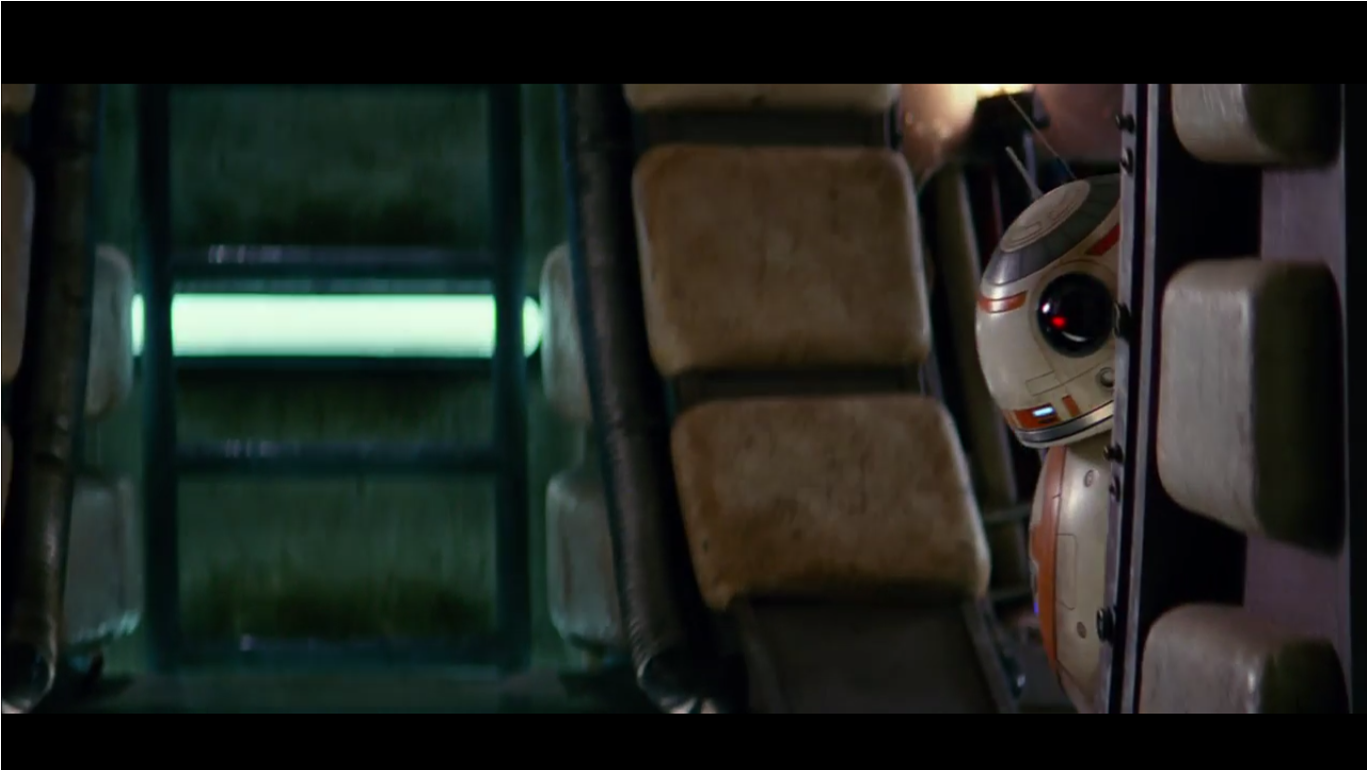 When I saw the first trailer, I wasn't a big fan of this droid, revealed to be called BB-8. However, once they revealed it to be all practical and not CGI, I came to terms with it more. The reason I didn't like it wasn't because I thought it was CGI, I just didn't like it. I guess I just thought the design and look was impractical. But when I learned it was made practically and could functionally operate, I liked it more. 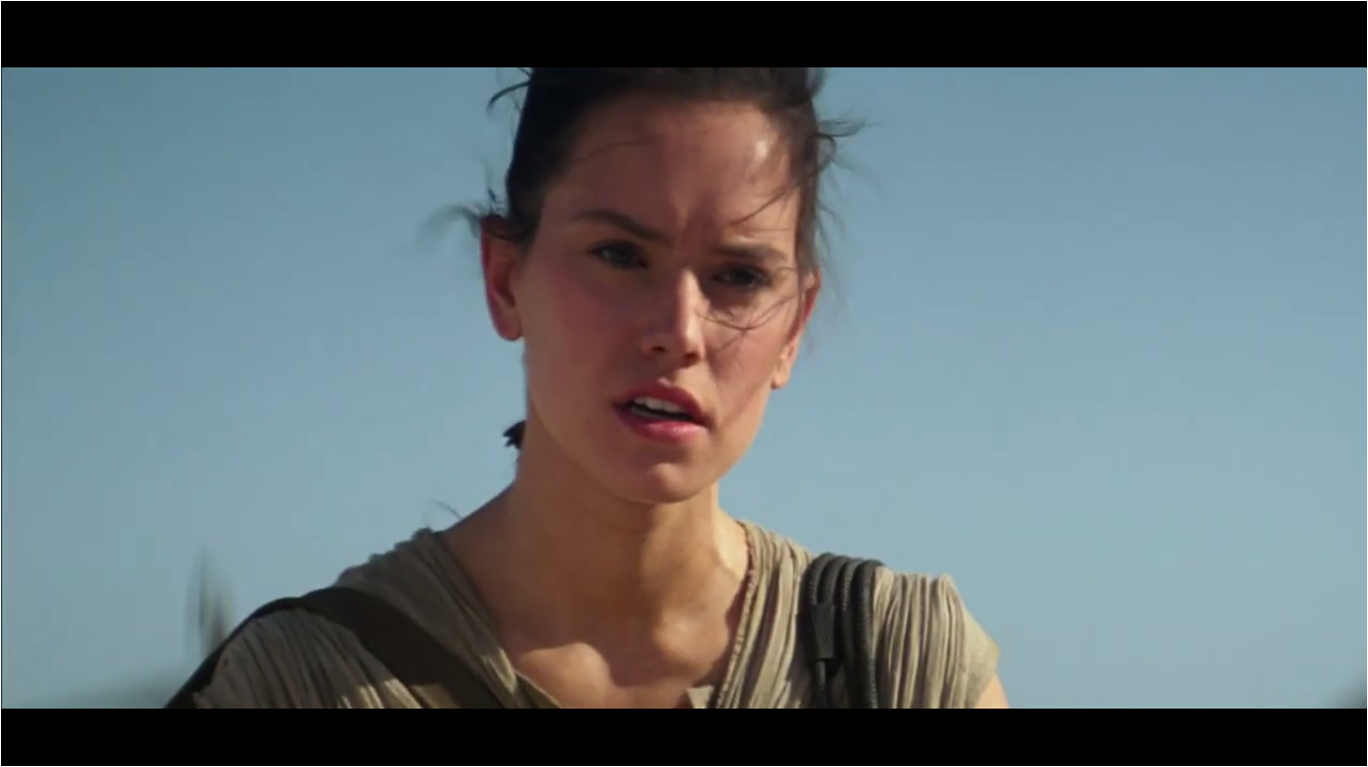 Hey, another shot of Daisy Ridley. 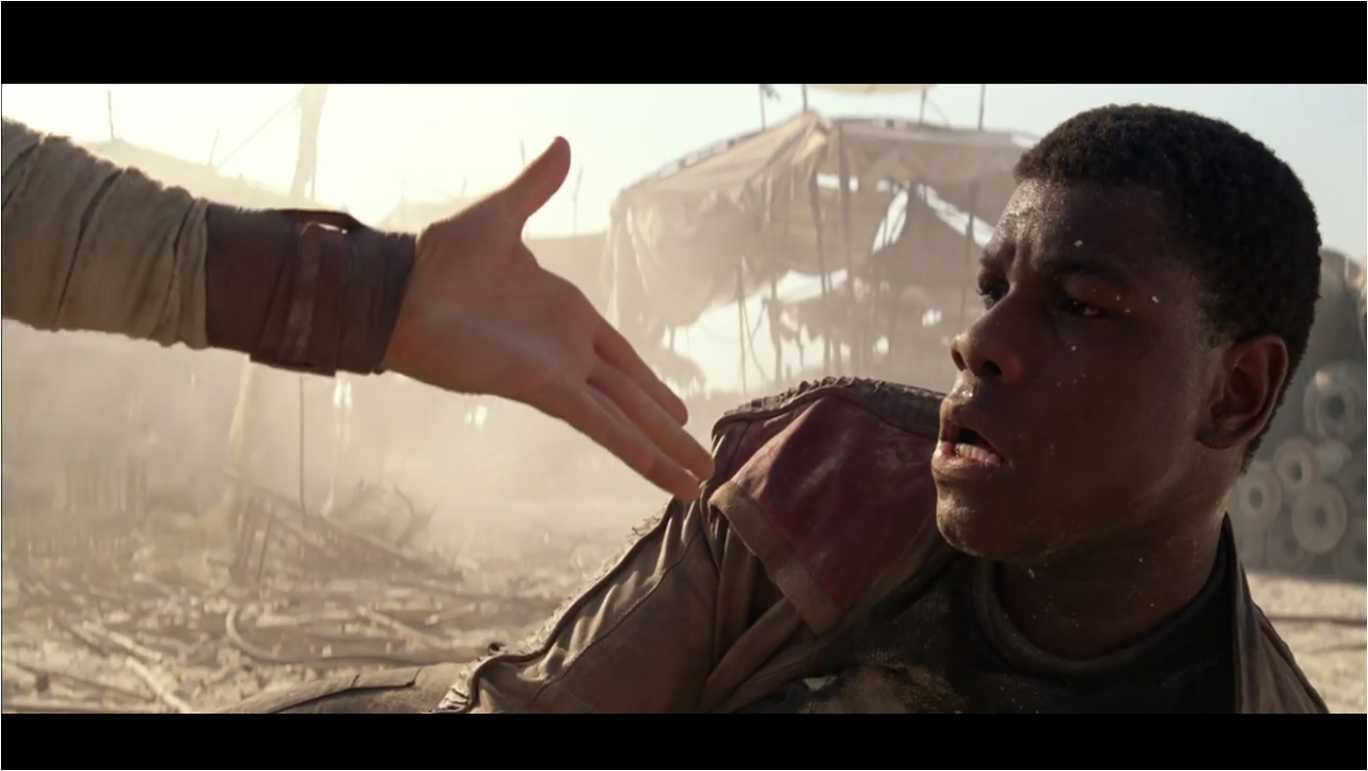 Yet another shot of a sweaty, out-of-breath John Boyega. 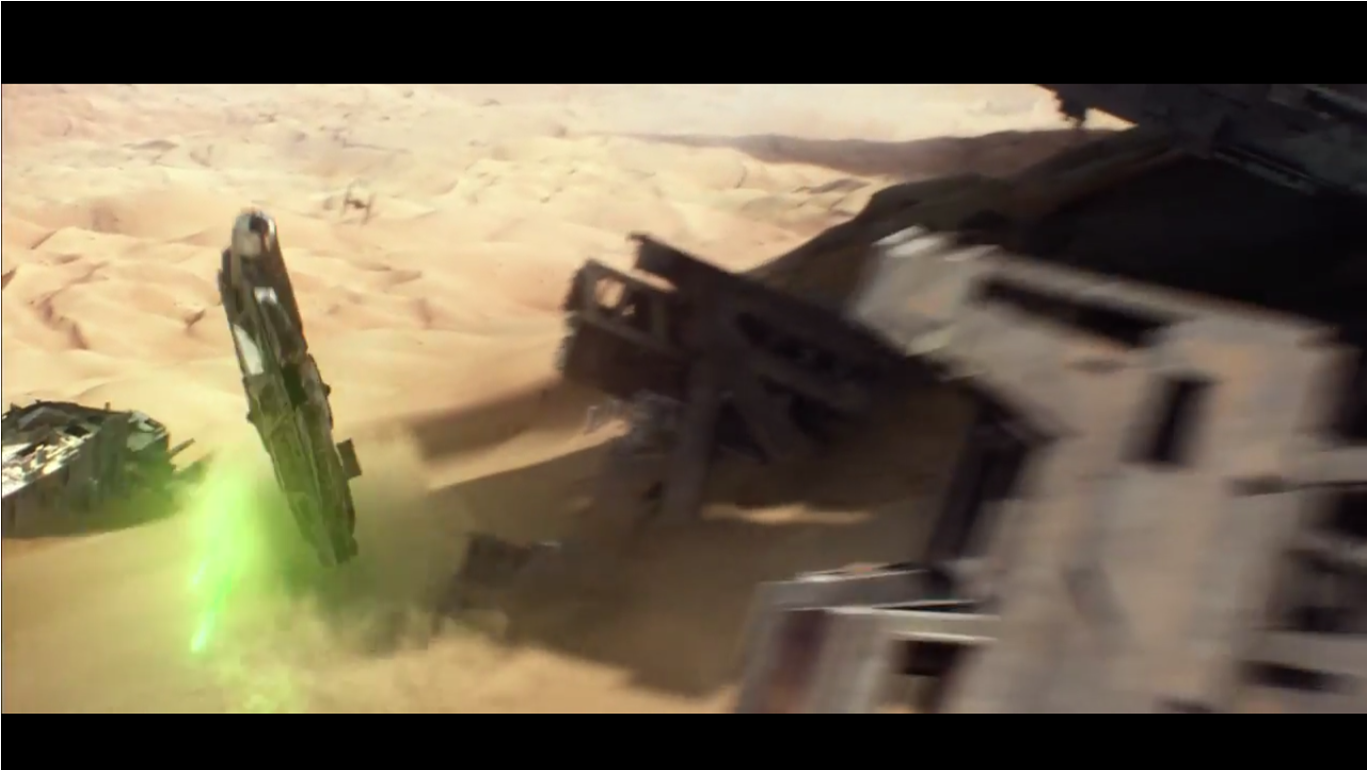 Okay, here's a really cool shot of a fight taking place with the Millennium Falcon on Jakku.  The thought process is that the Falcon is one of the ships on this graveyard planet, and that is what Daisy Ridley and John Boyega are looking for. Whether it's Han and Chewey piloting this or it's Ridley and Boyega, that's up for debate. 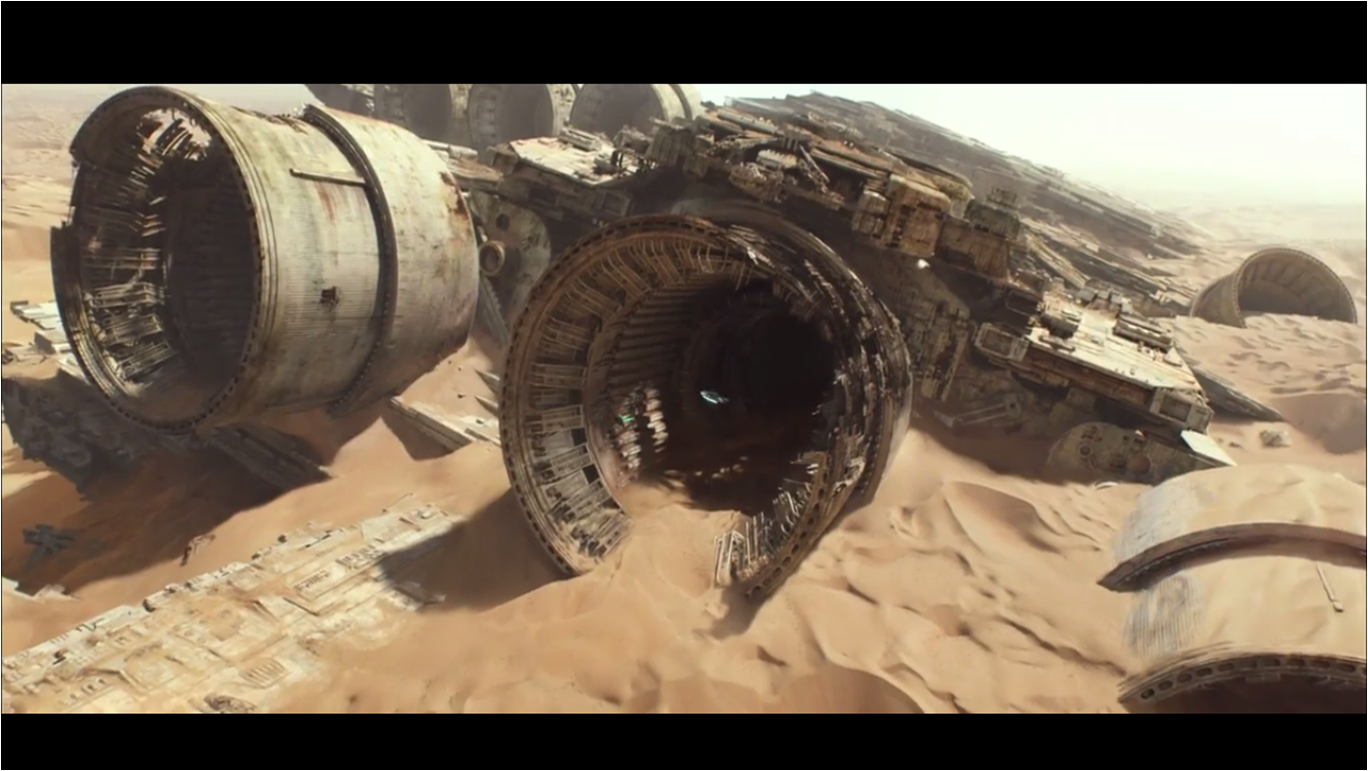 This is going to be an awesome chase scene. 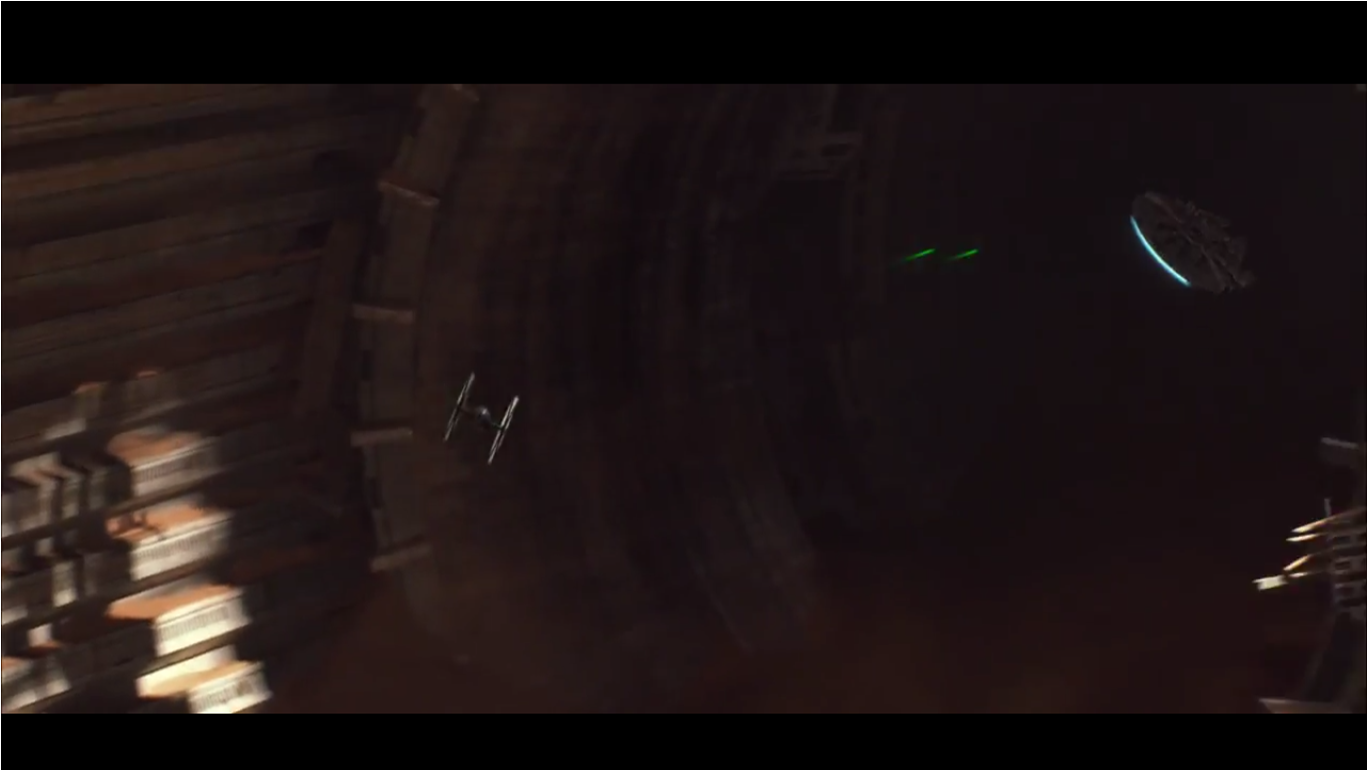 Classic J.J. Abrams zoom in. I'm surprised there are no lens-flares in this trailer. 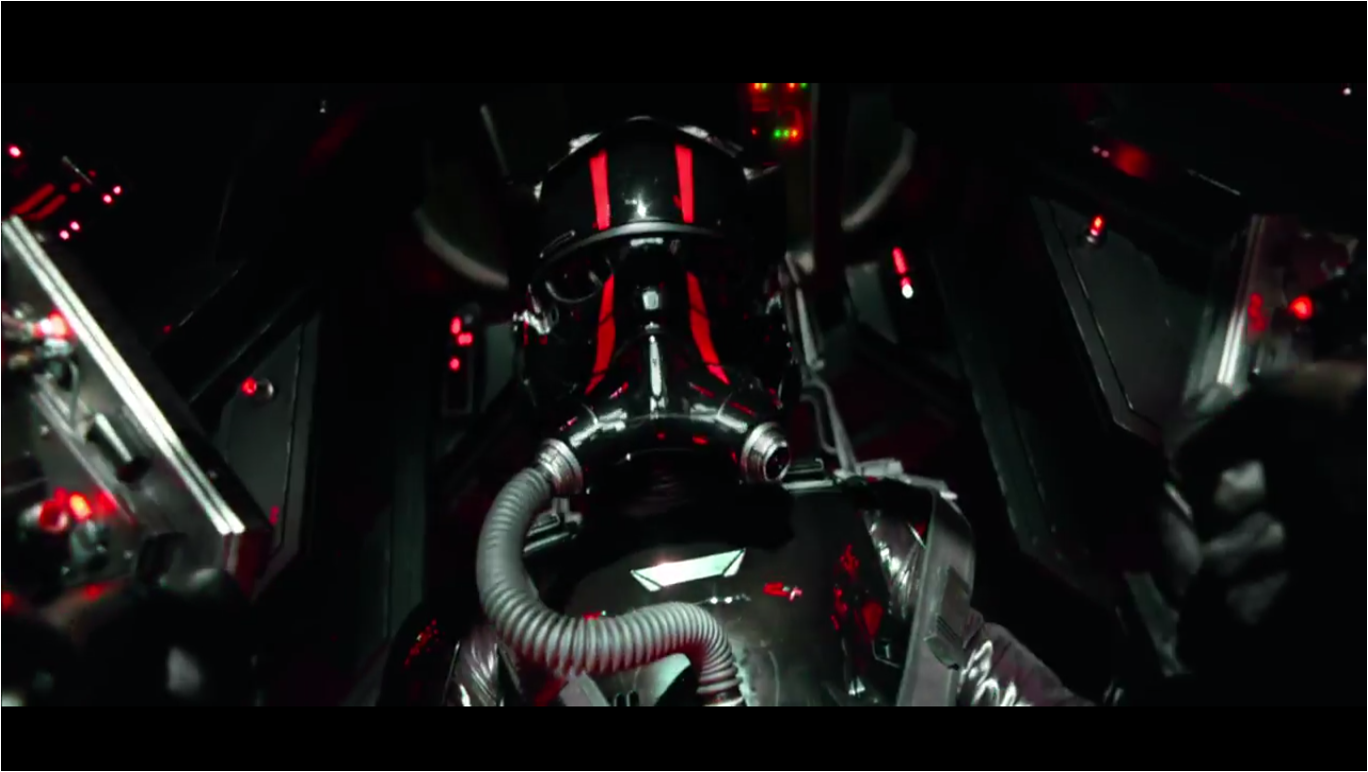 Another badass looking Stormtrooper. This one probably has a different name, though it looks different than the Chrometrooper. And it has red paint on it. Does it have anything to do with the red coloring of the flag seen earlier? 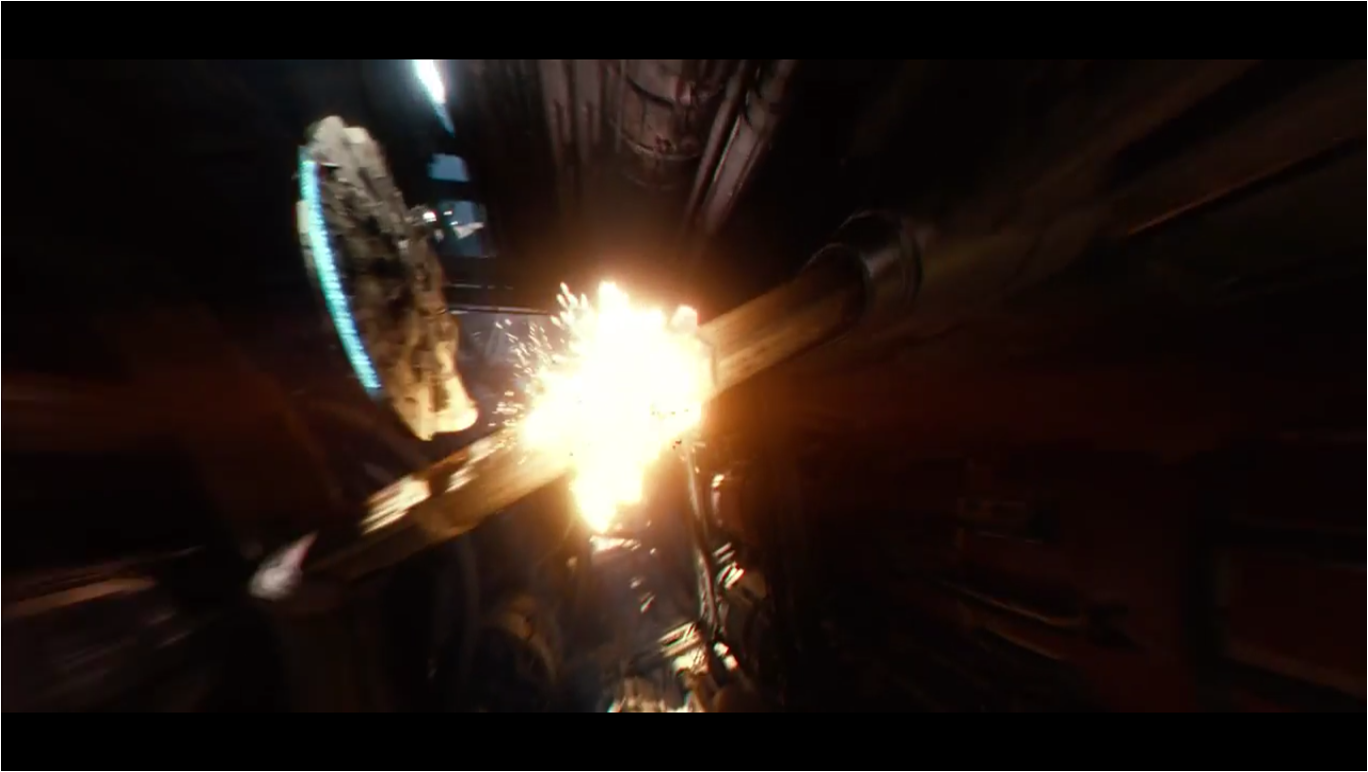 Yep, there's the classic Millennium Falcon twisting and swerving to move in and out of places. 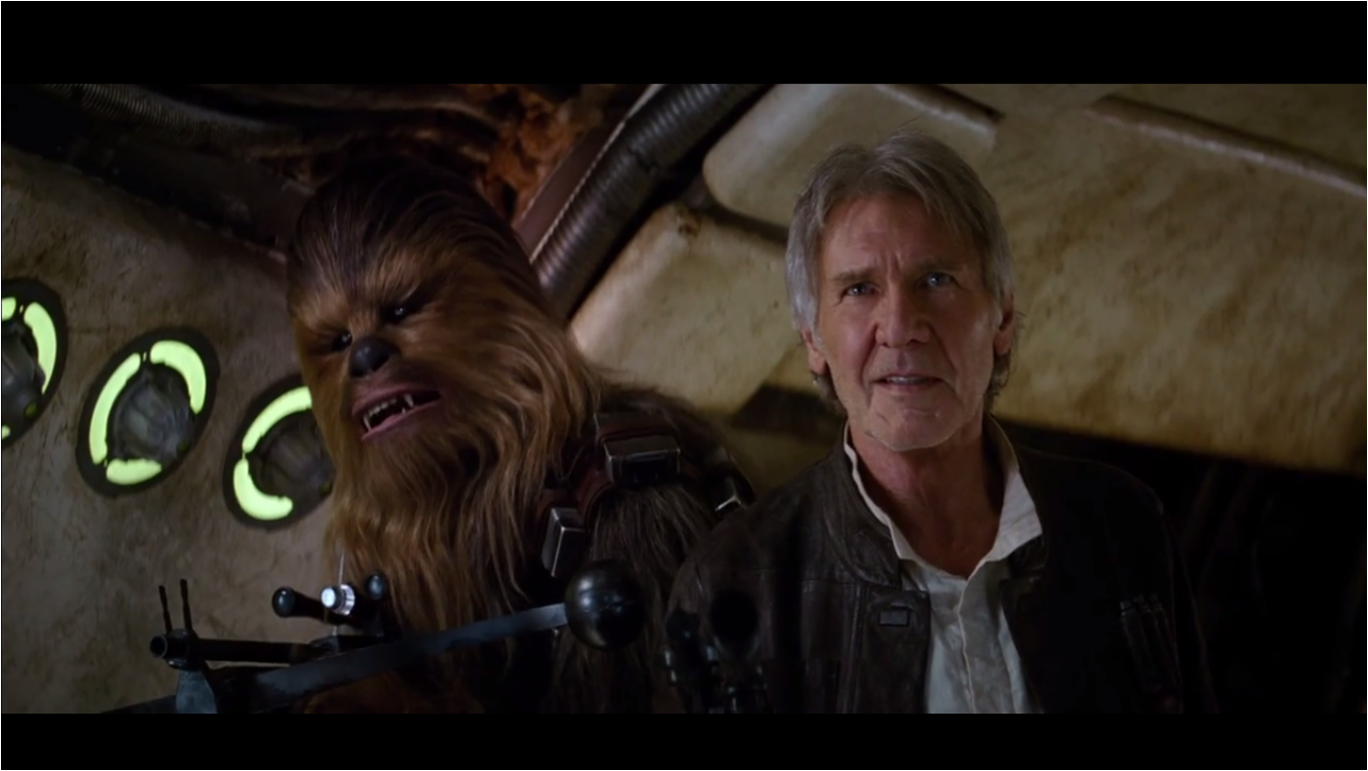 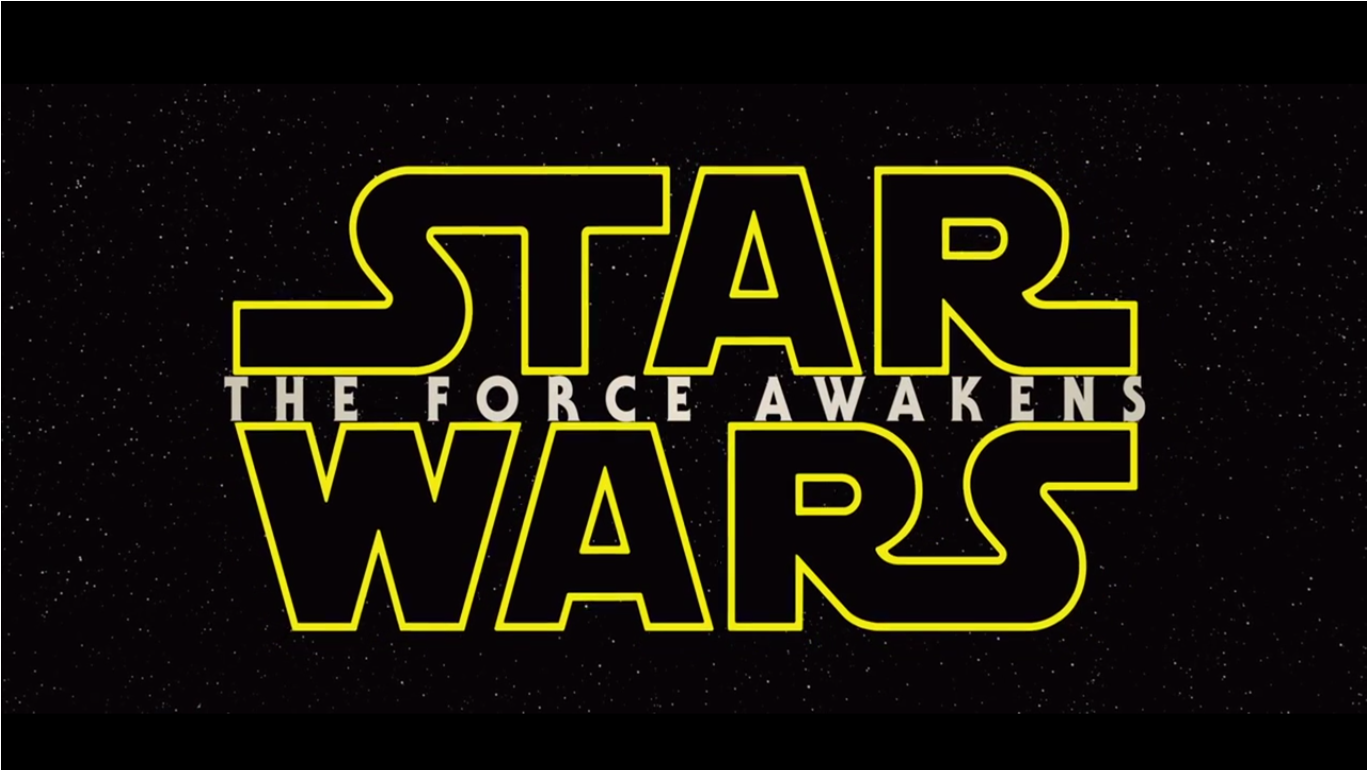 Yeah! Everyone's excited for Star Wars: The Force Awakens. When does it come out? December? Goddammit!

What do you think? Did you like the trailer? What do did you think of our analysis/breakdown? Do you agree with our theories? Did you spot something we didn't? Did I make a mistake in my Star Wars knowledge. I don't know everything so please correct me. Leave your thoughts in the comments section below.