Matthew McConaughey Could Star in a Comic Book Film 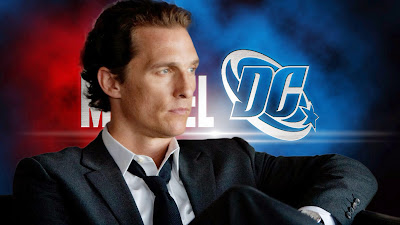 It seems like every big name in Hollywood either has, is or will be involved in comic book movies. Academy Award winners have been lining up to be involved in these movies because not only does it put their name out there for a wider (and younger) audience, but it's great to do for their kids or grandkids, as many of these actors have said. Last year saw Robert Redford involved in a Marvel movie, in Captain America: The Winter Soldier. We already know that Al Pacino wants to be involved with Marvel as well. Comic book movies are such a viable market for big name people, as well as big talent.

One of these incredible talents is Academy Award winner Matthew McConaughey, star of such films as Dallas Buyers Club, Interstellar and Mud. In a recent interview, McConaughey said that he has been approached by both Marvel and DC people to be involved in a comic book movie. He said:

“I've read some Marvel and DC scripts and I've talked about working with them on some scripts, none of which I'll share with you what they are-- or were. Yeah, I've circled some of those. Nothing has been right for me yet. But I'm sure open to it."

McConaughey is an incredible talent. I would be siked for him to be involved in any movie, let alone a comic book movie. I don't have any idea as to what films he may have been approached with, but the fact that he says that some were in the past is interesting. It makes you wonder what comic book movies have come out already that could have starred McConaughey. It doesn't matter to me whether he ends up in a Marvel or DC movie-- as long as he is one. But I have a feeling he'll go more along the lines of a DC film. The darker, more serious tone seems more fitting for his dramatic taste, and I personally see him as a great Hal Jordan/Green Lantern. But McConaughey may very play up a supporting character, like Redford in The Winter Soldier, as opposed to an actual main character.

What do you think? Do you want to see Matthew McConaughey in a comic book film? Should be be in a Marvel or DC movie? What characters could he play? Leave your thoughts in the comments section below.