Planet of the Apes 3 May Finally Have a Title 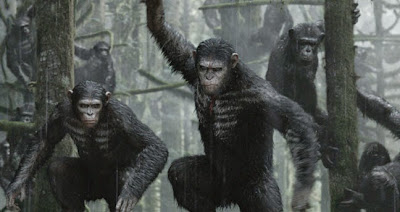 The rebooted/prequel series of Planet of the Apes have been a surprise hit for me. When Rise of the Planet of the Apes was first coming out, I was interested but I wasn't thoroughly excited for it. Since then, I have come to love it immensely. I give it like a 9.5 rating. It's a beautiful movie to me with an Oscar nomination worthy performance by Andy Serkis. Last year, the sequel, Dawn of the Planet of the Apes came out and I really liked it but it didn't hit the same levels as Rise did emotionally for me. You can read my review for Dawn here. So, needless to say, I am a big fan of this franchise and have been eagerly awaiting the release of the third film, set for a Summer, 2017 release. Dawn director Matt Reeves is set to return, as well as Serkis. However, the title and the basic plot for the film has been unknown, until now.

Collider is reporting that the title for the third film will be War for the Planet of the Apes. Frankly, this title isn't very surprising to me, as this is along the lines of what I was expecting. Dawn ended with the humans and apes at a sort of equilibrium, but the military was on its way to exterminate the apes. I always assumed that the third film would really show how the apes gained control of the entire planet, rather than just San Francisco. Granted, these films take places thousands of years (I believe) before the events of the original Planet of the Apes, but we need that assurance that the apes will entirely rule the earth. It feels like the past couple films have been a lot of set-up for an epic war film, which it seems like we will be getting with this movie.

What do you think? Do you like the sounds of War for the Planet of the Apes? Are you looking forward to it? Leave your thoughts in the comments section below.