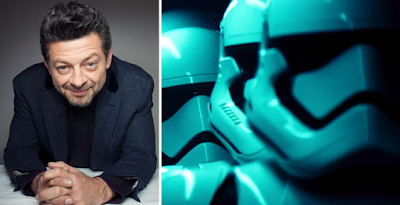 Ever since the cast list for Star Wars Episode VII: The Force Awakens was announced with Andy Serkis among the names of talent, the prevailing question has been who Serkis would play. Will he be a regular person, or a motion-capture alien? The closest thing we got to finding out who Serkis would be was when it is was confirmed that he was the one who did the narration for the first teaser trailer (you can read our initial article on that here). That was definitely not the voice of the owner of a puppy farm. But as to what kind evil character Serkis would play was still unknown. Would he be Darth Plagueis? Would he be some other sith lord, or a bounty hunter? Now, we know.

Along with this image of Serkis in his motion capture suit (confirming his role would be performance capture), it was revealed that Serkis' character is named Supreme Leader Snoke. 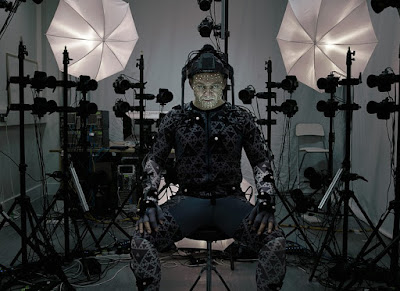 Snoke is not a character from the previous movies or the expanded universe, so he is an entirely new character. Other than the fact that Snoke is a bad guy, we know nothing about the character. I'm very interested to see what the design of this alien will be. But honestly, Serkis could be in the movie in that suit pictured above, no CGI, and still be terrifying. He is one of my favorite actors working today, in or out of a motion capture suit, and I am very excited to see him in The Force Awakens.

What do you think? Who do you think Supreme Leader Snoke is? How does he fit into the story? Are you glad that Andy Serkis will be doing motion capture, or would you have preferred him to do it as himself? Are you excited for Star Wars Episode VII: The Force Awakens? Leave your thoughts in the comments section below.